The image formed by the light rays from a self-luminous or an illuminated object that traverse an optical system. The image is said to be real if the light rays converge to a focus on the image side and virtual if the rays seem to come from a point within the instrument (see illustration). 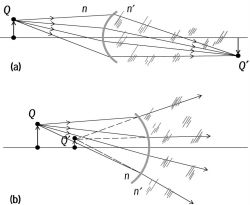 The optical image of an object is given by the light distribution coming from each point of the object at the image plane of an optical system. The ideal image of a point according to geometrical optics is obtained when all rays from an object point unite in a single image point. However, diffraction theory teaches that even in this case the image is not a point but a minute disk. See Diffraction

From the standpoint of geometrical optics, if this most desirable type of image formation cannot be achieved, the next best objective is to have the image free from all but aperture errors (spherical aberration). In this case the light distribution in the image plane is still circular, resembling the point image; there is a true coordination of object point and image, although the image may be slightly unsharp. If the aperture errors are small, or if the image is viewed from a distance, such an image formation may be very satisfactory. See Aberration (optics)

Asymmetry and deformation errors may be very disturbing if not held in check, because the light distribution of the image of a point in this case has a decidedly undesirable shape.

the pattern that is produced by the action of an optical system on the rays emitted by an object and that reproduces the contours and details of the object. The practical use of an optical image often entails a change in the scale of the images of the object and projection onto a surface (such as a screen, photographic film, or photocathode). The basis of the visual perception of an object is its optical image, as projected onto the retina of the eye.

Maximum correspondence of the image to the object is achieved when each point of the object is represented by a point. In other words, after all refractions and reflections in the optical system, the rays emitted by the light source should intersect at a single point. However, this is not possible for every location of an object with respect to the system. For example, in the case of systems that have an axis of symmetry (an optical axis), point optical images can be produced only for those points that lie at a slight angle to the axis, in the so-called paraxial region. The location of the optical image of any point of the paraxial region may be found by applying the laws of geometric optics; knowledge of the location of the cardinal points of the system is sufficient for this purpose.

The totality of points whose optical image can be produced by means of an optical system forms an object space, and the totality of the point images of these points forms the image space.

A distinction is made between real and virtual optical images. Real images are created by converging beams of rays at their points of intersection. The real optical image may be observed by placing a screen or photographic film in the plane of intersection of the rays. In other cases the rays emerging from an optical system diverge, but if they are mentally continued in the opposite direction they will intersect at a single point. This point is called the virtual image of a point object; it does not correspond to the intersection of real rays, and therefore a virtual optical image cannot be produced on a screen or recorded on film. However, a virtual optical image may play the role of an object with respect to another optical system (for example, the eye or a converging lens), which converts it into a real image.

An optical object is a set of points illuminated by its own or reflected light. If the way in which an optical system represents each point is known, it is easy to construct an image of the whole object.

The optical images of real objects in flat mirrors are always virtual (see Figure 1, a); in concave mirrors and converging lenses they may be either real or virtual images, depending on the distance of the objects from the mirror or lens (Figure 1, c and d). Convex mirrors and diverging lenses produce only virtual optical images of real objects (Figure 1, b and e). The location and dimensions of an optical image depend on the characteristics of the optical system and on the distance between it and the object. Only in the case of a flat mirror is an optical image always equal in size to the object.

If a point object does not lie in the paraxial region, then the rays that emerge from it and pass through the optical system are not collected at a single point but rather intersect the image plane at different points, forming an aberrational spot; the size of the spot depends on the location of the point object and on the design of the system. Only flat mirrors are nonaberrational (ideal) optical systems that produce a point image of a point. In the design of optical systems aberrations are corrected—that is, an effort is made to ensure that scattering aberrations do not deteriorate the image to noticeable degree; however, complete elimination of aberrations is impossible.

It should be noted that the above is strictly valid only within the framework of geometric optics, which, although quite satisfactory in many cases, nonetheless is only an approximate method of describing the phenomena that occur in optical systems. Only in geometric optics, where abstraction from the wave nature of light is used and, in particular, the phenomena of light diffraction are not taken into account, may the optical image of a luminous point be considered to be a point image. More detailed examination of the microstructure of an optical image, taking into account the wave nature of light, shows that a point image, even in an ideal (nonaberrational) system, is a complex diffraction pattern rather than a point.

The light energy density distribution in the image is significant for the evaluation of the quality of an optical image, which has acquired great importance because of the development of photographic, television, and other methods. A special characteristic—the contrast k = (Emax— Emin)/(Emax— Emin) where the Emin and Emax are the least and greatest values of illumination of the optical image of a standard test object—is used for this purpose. A grid whose brightness varies sinusoidally with a frequency R (the number of periods of the grid per millimeter) is usually used as such a standard test object: k depends on R and the direction of the grid lines. The function k(R) is called the frequency-contrast characteristic. In ideal systems k = 0 when R = 2A’ /\ or more, when A’ is the numerical aperture of the system in the image space and X is the wavelength of the light. The lower the k for a given R, the worse will be the quality of the optical image in the particular system.

Feedback
Flashcards & Bookmarks ?
Please log in or register to use Flashcards and Bookmarks. You can also log in with
Flashcards ?
My bookmarks ?
+ Add current page to bookmarks
Mentioned in ?
References in periodicals archive ?
The Galaxy Note 8 could be the first smartphone to use this new dual camera system and could hold an edge over the competition by offering optical image stabilisation.
Samsung Galaxy Note 8 to offer dual rear camera system with 3x optical zoom: Ming-Chi Kuo
It marks the first time Apple has offered optical image stabilization in its cameras, which helps reduce shakiness in photos and lets you take better photos in low light.
Can't Decide between iPhone 6, iPhone 6 Plus?
The DMCA[degrees]LZ40 features a powA[degrees]erful 42x optical zoom lens (35mm camera equivalent: 22A[degrees] 924mm) that is integrated with an Optical Image Stabiliser.
MORE BELLS AND WHISTLES
Optical measuring microscopes use a microscope-resolution, pure optical image together with the best image recognition system known to man--the human brain.
In optical metrology size is everything
The EF 200-400mm f/4L IS USM extender 1.4x features a flexible 200-400mm focal range with a fixed f/4 aperture, 4-stop optical image stabiliser and for the first time in a commercially available lens, a built-in 1.4x extender.
Canon introduces the EF 200-400mm f/4L IS USM extender
With Carl Zeiss lens, PureView technology with Optical Image Stablisation, and a 4.5" PureMotion HD+ display.
4 Nokia Lumia 920
The optical image stabilizer in this camera module uses a lens-shift system to control the lens inside the module.
Sharp to Introduce Industry's Thinnest CMOS Camera Module with Optical Image Stabilization for Smartphones
A redesigned optical path includes an increased number of elements and two aspherical lenses for fast, accurate performance, whilst Canon's acclaimed Optical Image Stabilizer (OIS) technology provides distortion-free images throughout the range of the 10x optical zoom.
Canon unveils Legria HF G10 camcorder
State College, PA, December 17, 2010 --(PR.com)-- Optical Image Technology announces the release of a complimentary white paper for insurers entitled "Harness the Power of Your Data: Get More Meaningful Use from Your Business Information." The paper addresses the increasing challenges insurers face as a result of the continued growth of digital information and the diverse media on which it is found.
Optical Image Technology Publishes ECM, Integration, and Process Automation White Paper
For ultimate ease of use, the 6000ILM uses a computer-controlled laser with automated photodetector alignment and offers simple point-and-shoot ARM imaging based on the optical image. A high-stability, precision motorized stage directs the movement of the sample beneath the ARM tip for measurement.
Atomic force microscopy
Summary: Canon Middle East announced today the development of Hybrid Image Stabilizer (IS), the world's first* optical Image Stabilizer which compensates for both angular camera shake and shift camera shake.
New Canon Hybrid IS world's first Image Stabilizer to compensate for two types of camera shake