[ȯr′gan·ik ′sem·i·kən‚dək·tər]
(materials)
An organic material having unusually high conductivity, often enhanced by the presence of certain gases, and other properties commonly associated with semiconductors; an example is anthracene.
McGraw-Hill Dictionary of Scientific & Technical Terms, 6E, Copyright © 2003 by The McGraw-Hill Companies, Inc.
The following article is from The Great Soviet Encyclopedia (1979). It might be outdated or ideologically biased.

Organic semiconductors include organic dyes, such as methylene blue and the phthalocyanines; aromatic compounds, such as naphthalene, anthracene, and violanthrene; polymers with conjugated bonds; some natural pigments, such as chlorophyll and β-carotene; charge-transfer molecular complexes; and ion-radical salts. Such semiconductors exist as single crystals and as polycrystalline or amorphous powders and films. The values of the resistivity p of organic semiconductors at room temperature range from 1018 ohm-cm for naphthalene and anthracene to 10–2 ohm-cm for ion-radical salts (see Figure 1). 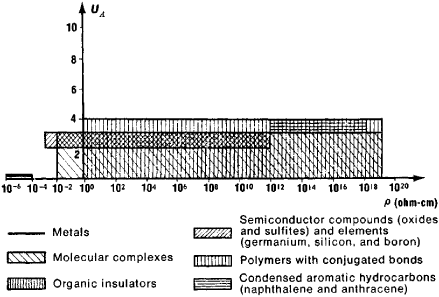 An organic semiconductor has a number of properties that are determined by the molecular character of its structure and by weak intermolecular interaction.

(1) The absorption of light causes a molecular excitation that can migrate through the crystal in the form of excitons.

(2) The formation of charge carriers under the action of light is due to the decay of excitons on the surface of the crystal, at structural defects, and at impurities when exciton-exciton interaction occurs; it may also be due to the autoionization of highly excited molecules.

(3) The conduction bands are narrow (~0.1 electron volt), and the mobility of the charge carriers is generally low (~1 cm2/volt-second).

(4) In addition to the band mechanism of electrical conduction, the hopping mechanism may operate.

In crystals of ion-radical salts, the intermolecular interaction is strongly anisotropic. For this reason, the optical and electrical properties are highly anisotropic, and such organic semiconductors can be regarded as quasi-one-dimensional systems.

Organic semiconductors are used as photosensitive materials in, for example, information recording processes. They are also used in microelectronics and in the manufacture of various types of sensing units. The investigation of organic semiconductors is important for understanding the processes of the conversion and transfer of energy in complex physicochemical systems, especially in biological tissues. Organic semiconductors such as ion-radical salts are expected to provide the basis for the development of superconductors with a high critical temperature.

A semiconductor made from a carbon-based material. For example, light-emitting polymers (LEPs) are organic semiconductors. Contrast with inorganic semiconductor. See LEP.
Copyright © 1981-2019 by The Computer Language Company Inc. All Rights reserved. THIS DEFINITION IS FOR PERSONAL USE ONLY. All other reproduction is strictly prohibited without permission from the publisher.