ovum (ōˈvəm), in biology, specialized plant or animal sex cell, also called the egg, or egg cell. It is the female sex cell, or female gamete; the male gamete is the sperm. The study of the ovum is included in the science of embryology. The development of a new individual from an unfertilized ovum is called parthenogenesis.

Ova are produced in the ovary of the female; they are formed from reproductive cells (called primordial germ cells) in a process called oogenesis. In this maturation process a germ cell builds up its food supply and then undergoes a series of cell divisions (called meiosis), by which the number of chromosomes in the mature ovum is reduced by half. In oogenesis in animals only one of the four cells formed by meiotic division is functional. In this ovum all the yolk from the original cell is collected; the three other, yolkless, cells are called polar bodies and never develop further. Maturation also occurs in the formation of sperm (spermatogenesis), but in spermatogenesis, in contrast to oogenesis, all four of the cells formed by meiotic division are functional.

The union of mature sperm and ovum, each bearing half the normal number of chromosomes, results in a single cell (the zygote) with a full number of chromosomes. The zygote undergoes a series of cell divisions (see mitosis) producing a multicellular embryo and finally a mature individual. In all sexually reproducing animals the production and maturation of the ovum, its fertilization, and its early embryonic development are essentially identical.

In plants that reproduce sexually the pattern is similar to that of animals. In the mosses and ferns, however, the egg cells are formed in special organs called archegonia and are fertilized by sperm that are commonly flagellated and motile like those of animals. In flowering plants the ovary is situated in the base of the pistil of the flower. After fertilization by a sperm contained in a pollen grain, the zygote develops into the embryo, contained in the seed.
The Columbia Electronic Encyclopedia™ Copyright © 2022, Columbia University Press. Licensed from Columbia University Press. All rights reserved. 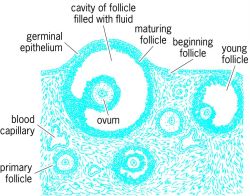 Feedback
Flashcards & Bookmarks ?
Please log in or register to use Flashcards and Bookmarks. You can also log in with
Flashcards ?
My bookmarks ?
+ Add current page to bookmarks
Mentioned in ?
References in periodicals archive ?
Ovum says the company's industry leadership reflects in part its continuous improvements to the HERE Open Location Platform (OLP) and focus on data privacy
'HERE is once again the highest-ranked location platform' - Ovum
The key characteristic separating the Leaders category from the Challengers category in the Ovum report was a consistently strong all-round performance in offering financial institutions enterprise-wide platform coverage.
NICE Actimize gets high score average across key areas
Only at the end of the decade, will Africa and developing Asian markets approach the 100% penetration mark, according to Ovum forecasts.
Mobile penetration crosses 100% of global population
The Ovum report highlights the growing focus on mobile banking within financial institutions and notes the importance of enhancing mobile channel functionality and taking advantage of digital marketing to drive engagement.
Fiserv mobile banking solution ranks high in vendor evaluation
To maintain a sizable pool of available agents, Ovum recommends that outsourcers seek out otherwise unexplored potential pockets of workers."
Work-at-home model takes off in outsourced agent arena
Ovum's M2M forecasts present a more modest and sober picture than some of those produced by other industry pundits.
M2M Revenues To Treble Over The Next Five Years
Ovum expects many more businesses to start deploying them over the next 12 months.
Organisations investing in mobile enterprise apps
Ovum estimates that telco IT spending will reach US$60bn in 2017, growing at a CAGR of 0.6 percent between 2013 and 2017.
Telco IT spending to reach US$60bn in 2017
Ovum predicts that Microsoft's mobile OS will rise from 4.5 percent market share in 2012 to 13 percent by 2017 on the back of a reported $1 billion marketing campaign to raise its profile among consumers.
Windows Phone 8 set for rapid growth, analysts predict
A new report published by global research & analyst firm Ovum confirms the widespread market adoption of TR-069 CPE WAN Management Protocol, in numbers triple what originally was publically known.
Ovum Confirms 147 Mil Devices Managed By TR-069
Ovum is warning of the likelihood that consumer users will use services like
IT managers need to evaluate Drive alternatives