[′par·ə‚sīt ‚drag]
(fluid mechanics)
The portion of the total drag of an aircraft exclusive of the induced drag of the wings.
McGraw-Hill Dictionary of Scientific & Technical Terms, 6E, Copyright © 2003 by The McGraw-Hill Companies, Inc. 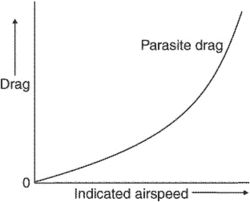 Feedback
Flashcards & Bookmarks ?
Please log in or register to use Flashcards and Bookmarks. You can also log in with
Flashcards ?
My bookmarks ?
+ Add current page to bookmarks
Mentioned in ?
References in periodicals archive ?
The most efficient cruising speed is found at the bottom of the total drag curve, itself formed by combing the curves for induced and parasite drag. But that speed usually is painfully slow, so most operators opt for something higher on the parasite drag curve.
Which Airspeed? The one you want to fly in certain conditions may not be marked on the airspeed indicator or the instrument panel. But maybe it's not that important?
Parasite drag is the kind of drag produced when we lower the landing gear of a retractable airplane or stick our arm out the window of a moving car.
Got rudder? It's not used to turn the airplane, but to counter adverse yaw produced when ailerons are deflected
Max L/D is that point at which the wing is producing the greatest ratio of lift to drag and where induced drag, and parasite drag are equal.
Slow for slow's sake: flying on the back side of the power/drag curve is just another skill. To squeeze the most out of your airplane, knowing the theory helps
Drag," above right, summing up how increasing speed brings increasing parasite drag and decreasing induced drag, resulting in a happy minimum of both total drag and required thrust, which occurs at the optimum lift-to-drag ratio, or L/[D.sub.max].
Gliding with precision: when your single's engine quits, you become the pilot of a fairly lousy glider. How to make the most of your altitude, the energy source now keeping you aloft
Parasite drag, of course, is the sum of pressure and friction drag resulting from the airplane's basic configuration and is independent of lift.
Cruise dynamics: We spend most of our time in cruise flight, yet little training time is devoted to the finer points of savvy straight and level