An endocrine organ usually associated with the thyroid gland and possessed by all vertebrates except the fishes. In response to lowered serum calcium concentration, a hormone is produced which promotes bone destruction and inhibits the phosphorus-conserving activity of the kidneys. See Thyroid gland 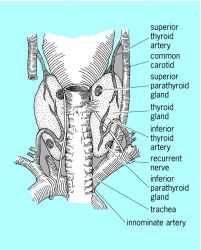 In humans, there are typically four glands situated as shown in the illustration; however, the number varies between three and six, with four appearing about 80% of the time. Variations in the positioning of the glands along the craniocaudal axis occur but, excepting parathyroid III which may occasionally be found upon the anterior surface of the trachea, the relation to the posterior surface of the thyroid is rarely lost.

The parathyroid glands are essential for the regulation of calcium and phosphate concentrations in the extracellular fluids of amphibians and higher vertebrates. Parathyroid hormone has two major target organs, bone and kidney. It acts on bone in several ways. Short-term changes include a rapid uptake of bone fluid calcium into osteoblast cells, which in turn pump the calcium into the extracellular fluids. Long-term effects include increased activity and number of osteoclasts, bone cells which act to break down bone matrix and release calcium from bone. All of these effects result in increased blood calcium values. See Bone, Calcium metabolism

[¦par·ə′thī‚rȯid ‚gland]
(anatomy)
A paired endocrine organ located within, on, or near the thyroid gland in the neck region of all vertebrates except fishes.
McGraw-Hill Dictionary of Scientific & Technical Terms, 6E, Copyright © 2003 by The McGraw-Hill Companies, Inc.

Feedback
Flashcards & Bookmarks ?
Please log in or register to use Flashcards and Bookmarks. You can also log in with
Flashcards ?
My bookmarks ?
+ Add current page to bookmarks
Mentioned in ?
References in periodicals archive ?
Parathyroid glands were identified bilaterally & preserved with an intact vascular pedicle.
FACTORS CONTRIBUTING TO POST-OPERATIVE HYPOCALCAEMIA AFTER TOTAL THYROIDECTOMY-EXPERIENCE IN A TERTIARY CARE GOVT. HOSPITAL IN EASTERN INDIA
Diseases of the parathyroid gland and other hyper- and hypocalcemic disorders.
Diagnostic Value of Ultrasound and Tc-99m MIBI scintigraphy and SPECT/CT for Pre-operative Localization of Parathyroid Adenoma in Patients with Primary Hyperparathyroidism: A Single-Center Comparative Study/Operasyon Oncesi Paratiroid Adenomlarinin Yerini Saptamada Ultrason ve Tc-99m MIBI sintigrafisi ve SPECT/CT Incelemenin Tanisal Degeri
Further studies are required to clarify whether the same possible molecular or cellular change is also the cause of the ectopic location of the parathyroid gland.
Ectopic and Eutopic Located Parathyroid Lesions: Do They Behave Differently? How Can We Monitor Them? What Should We Look for?
Our policy for total thyroidectomy is to preserve parathyroid glands and its vascularity.
Frequency of Hypocalcaemia following Total Thyroidectomy
The parathyroid glands are generally located in the cervical region, just behind the thyroid gland.
Robot-assisted endoscopic mediastinal parathyroidectomy
Although the normal parathyroid glands are usually not visualised with available sonographic technology, enlarged parathyroid glands may be visualised.
Sonar guided focused parathyroidectomy under cervical block
The underlying pathophysiology was supposed to be either a common genetic predisposition or the extension of the autoimmune process to the parathyroid glands, which is still under debate (12).
Primary hyperparathyroidism and Gougerot disease
A hundred nineteen patients (20.4%) were presented as parathyroid gland diseases, a follow-up was considered in 4 patients.
EFFECT OF MULTIDISCIPLINARY BOARD ON THE DIAGNOSIS AND TREATMENT OF ENDOCRINE DISEASES / MULTIDISIPLINER KURULUN ENDOKRIN HASTALIKLARIN TANI VE TEDAVISINE ETKISI
Four different-sized macroscopic biopsy specimens from parathyroid glands were sent to the Pathology Department of the Erciyes University Medicine Faculty.
Spontaneous and Excellent Healing of Bilateral Brown Tumors in Mandible after Endocrinal Therapy and Subtotal Parathyroidectomy: Case Report with 4-Year Follow-Up
Mody, "Histopathological changes of the thyroid and parathyroid glands in HIV-infected patients," Journal of Thyroid Research, vol.
Severe Symptomatic Hypocalcemia from HIV Related Hypoparathyroidism
In addition, the technique was considered to be appropriate to access the parathyroid gland with the antecedent removal of the thyroid gland.
Craniofacial Brown Tumor in Patients with Secondary Hyperparathyroidism to Chronic Renal Failure: Report of Two Cases in Cipto Mangunkusumo Hospital
A slightly enlarged left lower parathyroid gland that was excised under the suspicion that adenoma was evidenced.
Primary Hyperparathyroidism due to Parathyroid Adenoma Originated from Supernumerary Gland