1. a character in a play, novel, etc.
2. (in Jungian psychology) the mechanism that conceals a person's true thoughts and feelings, esp in his adaptation to the outside world
Collins Discovery Encyclopedia, 1st edition © HarperCollins Publishers 2005

A mask of terra-cotta, stone or marble, designed to imitate the human face or the head of an animal, usually in the form of a grotesque; employed as an antic or as a gargoyle for discharging water.

The English term personality is derived from the Greek word persona, which refers to the masks worn by the actors in ancient Greek dramas. In psychology, the persona is the personality that we project to the world (i.e., the self we want other people to see). As a public self, the persona is a means of facilitating social interaction and should not be viewed negatively as a “false” self. One of the most influential formulations of the notion of persona was put forward by the Swiss psychiatrist Carl Jung. In Jung’s personality theory, the persona is one among several selves: the ego represents what we might call the self-image (the self we imagine ourselves to be); the shadow (which is a kind of alter-ego) embodies the traits that have been rejected as “not-self”; the anima or animus is the subconscious counter-self composed of the characteristics our particular culture identifies as belonging to the opposite sex; and the self is an archetype from the collective unconscious that provides the subconscious pattern for the ego (for the sense of selfhood).

Each of these aspects of the self can appear in dreams in various forms. In the case of the persona, dream images include everything from clothing that we put on or take off in dreams to the roles we assume. In Jungian therapy, the persona is viewed as a means whereby new characteristics can be integrated into the patient’s ego structure. In other words, the subject can draw on previously rejected personality traits from the shadow and the anima or animus by acting them out in certain social situations and later identifying with them as part of a new ego concept. 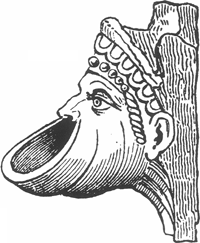 persona
A mask of terra-cotta, marble, etc., designed to imitate the human face or the head of an animal, usually in grotesque form, employed as an antefix in buildings, as an ornament for discharging water, or as a gargoyle.
McGraw-Hill Dictionary of Architecture and Construction. Copyright © 2003 by McGraw-Hill Companies, Inc.

An extension to a Web browser that customizes the toolbar area at the top of the window. There are hundreds of Personas that can be previewed by moving the mouse over the samples in the Personas Web page. For more information, visit www.getpersonas.com. See browser extension.

Feedback
Flashcards & Bookmarks ?
Please log in or register to use Flashcards and Bookmarks. You can also log in with
Flashcards ?
My bookmarks ?
+ Add current page to bookmarks
Mentioned in ?
References in periodicals archive ?
15- Considering assistants of the German Military Attache, Karsten Harwege, Maik Mietho and Jorge Michael Grobman personae non gratae.
16- Considering Canadian Charge d'Affaires and all members of the Embassy personae non gratae.
Syria Considers Ambassadors , Charge d'Affaires and Diplomats of the USA, Britain, Switzerland, France, Italy, Spain , Germany, Bulgaria, Belgium, Canada and Turkey Personae Non Gratae
To do this, many poets of this generation employ personae, inhabiting and fleshing out the skins of their poems' figures.
In other voices: the millennial poets and personae
She shines in her analysis of the competing personae of Bill Clinton and Hillary, suggesting that Hillary's persona is probably more suited to being commander-in-chief than Bill's.
Vamps and Tramps
The impulse that motivated Komunyakaa as a small boy in his Louisiana hometown of Bogalusa impels him now as a GI in Vietnam, both personae laying claim to their humanity.
Yusef Komunyakaa: the unified vision - canonization and humanity
Having started with a three-piece burst of raw power and pure pop joy, PJ's looted idioms and shucked personae from album to album, going from grrrl-ish rage and genderfuck to Gothic siren, to junk-tinged lounge and folk, all without ever abandoning a solid blues bedrock.
Dance Hall at Louse Point