phase of the moon

phase of the moon

Used humorously as a random parameter on which something is said to depend. Sometimes implies unreliability of whatever is dependent, or that reliability seems to be dependent on conditions nobody has been able to determine. "This feature depends on having the channel open in mumble mode, having the foo switch set, and on the phase of the moon."

True story: Once upon a time there was a bug that really did depend on the phase of the moon. There was a little subroutine that had traditionally been used in various programs at MIT to calculate an approximation to the moon's true phase. GLS incorporated this routine into a Lisp program that, when it wrote out a file, would print a timestamp line almost 80 characters long. Very occasionally the first line of the message would be too long and would overflow onto the next line, and when the file was later read back in the program would barf. The length of the first line depended on both the precise date and time and the length of the phase specification when the timestamp was printed, and so the bug literally depended on the phase of the moon!

The first paper edition of the Jargon File (Steele-1983) included an example of one of the timestamp lines that exhibited this bug, but the typesetter "corrected" it. This has since been described as the phase-of-the-moon-bug bug.

Phase of the Moon

one of the different shapes of the visible part of the moon. The changes of phase of the moon are caused by variations in the conditions under which the sun illuminates the dark lunar sphere as the moon moves in its orbit about the earth. As the relative positions of the earth, the moon, and the sun change, the terminator—that is, the boundary between the illuminated and unilluminated parts of the lunar disk—moves, thus causing the observed changes in the configuration of the visible part of the moon (see Figure 1). 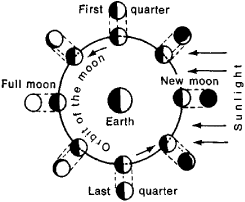 Figure 1. Changes of phase of the moon

Feedback
Flashcards & Bookmarks ?
Please log in or register to use Flashcards and Bookmarks. You can also log in with
Flashcards ?
My bookmarks ?
+ Add current page to bookmarks
TheFreeDictionary presents:
Write what you mean clearly and correctly.
Mentioned in ?
References in periodicals archive ?
Some articles went even further, citing a couple of poorly designed and thorougly debunked studies showing a connection between crime rates and the phase of the Moon but failing to mention the dozens of high-quality studies that showed no connection whatsoever.
Full-moon fever: a full moon really does make people act silly!
A report by (http://newswatch.nationalgeographic.com/2014/09/06/watch-final-summer-supermoon-this-weekend/) National Geographic said that the full phase of the moon will happen at 9:38 p.m.
Final Supermoon Of The Lunar Trilogy To Light Up The Sky [Watch Videos Of The First Two Supermoons]
Because the number and types of insects found varied according to the time of year, temperature, and phase of the moon, Lowman suspects that the seasons influence where insects reside and how many species exist.
Temperate treetops: canopy research reaches new latitudes
Clearly, the phase of the Moon plays a significant role in the gathering's attendance.
Riverside's silver anniversary
Sky watchers on Saturday were treated to the sight of a super moon, which is the phase of the Moon's orbit around the Earth when it is closest to our planet.
Super Moon 2013: Earth's Satellite Lights up Weekend Skies [PHOTOS]
The dates below are based on many formulas that take the moon's place in the zodiac, as well as the phase of the moon, into consideration.
Best day to fish & plant?