common name for plants of the genus Phlox and for members of the Polemoniaceae, a family of herbs (and some shrubs and vines) found chiefly in the W United States. The family includes many popular wild and garden flowers, especially the genera Phlox, Polemonium (called Jacob's ladder), and Gilia, a plant common in desert and mountain areas. Although most phloxes are perennial, the common garden phloxes are annual hybrids of the Texas species Phlox drummondii. The moss pink (Phlox subulata) is a creeping evergreen plant native to the E United States and often cultivated in rock gardens. A few species of phlox and polemonium are found in E Asia. The phlox family is classified in the division MagnoliophytaMagnoliophyta
, division of the plant kingdom consisting of those organisms commonly called the flowering plants, or angiosperms. The angiosperms have leaves, stems, and roots, and vascular, or conducting, tissue (xylem and phloem).
..... Click the link for more information. , class Magnoliopsida, order Solanales.
The Columbia Electronic Encyclopedia™ Copyright © 2013, Columbia University Press. Licensed from Columbia University Press. All rights reserved. www.cc.columbia.edu/cu/cup/ 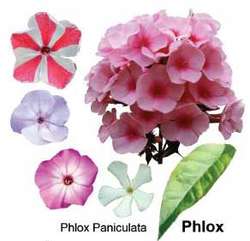 The tall, highgrowing perennial phlox is edible, not the low, creeping 4 inch high (10cm) phlox. Slightly spicy taste. Flower colors range from reddish purple to pink, some white. Great in salads.
Edible Plant Guide © 2012 Markus Rothkranz
The following article is from The Great Soviet Encyclopedia (1979). It might be outdated or ideologically biased.

a genus of perennial and, less commonly, annual herbs and sometimes subshrubs of the family Polemoniaceae. The erect or climbing stems are only slightly branching. The entire leaves are lanceolate or narrowly ovate; they are opposite except at the upper part of the stems, where they are alternate. In species with procumbent, highly branched stems that form mats, the leaves are linear or subulate; on sterile shoots the leaves are agglomerate. The flowers are in many-flowered terminal inflorescences known as thyrses; less commonly, they are solitary. The corolla has a narrow tube and a wheel-shaped, saucer-shaped, or stellate five-parted lip. The fruit is a three-valved capsule.

There are about 60 species of phlox, distributed in North America. The USSR has one spreading mountain species— P. sibirica. Many species are ornamental. One of the best-known tall-growing perennial species is P. paniculata, which has an enormous number of varieties that differ in height, shape, and size of the inflorescences and size and coloring of the flowers. The most common spreading species include P. subulata and P. setacea, and the best-known annuals include P. drummondii. In floriculture, hybrids developed with other species of Phlox are also used.

Feedback
Flashcards & Bookmarks ?
Please log in or register to use Flashcards and Bookmarks. You can also log in with
Flashcards ?
My bookmarks ?
+ Add current page to bookmarks
Mentioned in ?
References in periodicals archive ?
To order by debit/credit card call 0843 922 5000 quoting SM34687 or send a cheque made payable to SM34687 to Mirror Phlox Mixed (SM34687) PO Box 64, South West District Office, Manchester, M16 9HY, or visit mirrorgardenoffers.co.uk
OFFER of the week; Gardening club
Make sure your phlox is well mulched and watered to help keep the fungus at bay next year.
YOU ASK... IRISH DAILY MIRROR SATURDAY 22.10.2016 DMEEIR IN THE DMEEIR irishmirror.ie SATURDAY 22.10.2016 IRISH DAILY MIRROR 33 GARDEN with DIARMUID GAVIN weekend@mirror.co.uk Weekend, Daily Mirror, One Canada Square, London E14 5APSorry, Diarmuid cannot reply personally
Sometimes phlox develop mildew but forms of Phlox maculata seem impervious to it.
PHLOX CLEVER; They bring colour, character and charm, so sniff out your perfect herbaceous perennials and wait for their moment to shine in your garden
they are plant Sometimes phlox develop mildew but forms of Phlox maculata seem impervious to it.
every garden Soul and spirit of; GARDENS of TV's Gardeners' World They bring colour, character and charm, so sniff out some of these perfect herbaceous perennials and wait for their moment to shine in your plot
The propensity for lepidopteran pollination in Phlox is not surprising given the basic floral form found in the genus.
Timing is everything: temporal variation in floral scent, and its connections to pollinator behavior and female reproductive success in Phlox divaricata
Phlox drummondii is an annual bedding type that had almost disappeared due to its proneness to disease.
Top of the phlox; top tips WITH RICHARD EVANS OF SNOWDONIA NURSERIES
Good varieties include Phlox subulata Amazing Grace, known as moss phlox, which has cushion-like mounds of soft, narrow leaves and produces pale pink flowers with deep pink eyes, and Phlox douglasii Lilac Cloud, which looks great in a terracotta pot.
Simply lovely lavender; GARDENING It's the quintessential cottage garden plant but lavender is at home in many other situations. Hannah Stephenson looks at its versatility
This is the season to plant spring-blooming perennials such as ground phlox and creeping phlox (phlox stolonifera), rock cress and variegated rock cress, bleeding hearts, perennial sweet alyssum, candytuft, all of the ornamental grasses and dozens of other fully hardy perennials.
Fall is a great time to plant
There, speckling the state's green fields, you'll find the annual phlox, a flower also known as "Texas pride." Its petals, a light purple elsewhere, are bright scarlet in the southeast near Austin.
Evolution's wedges: finding the genes that drive one species into two
This is the first comprehensive natural history of the genus phlox, whose 61 species of the diminutive, predominantly pink and white flowers can be found throughout North America and parts of Mexico.
Phlox; a natural history and gardener's guide
wind-- another alpine phlox, each summer reaching higher-- a curse on my
Climate Change
The plant in question is the extremely rare Phlox hirsuita, otherwise known as Yreka phlox.
A recovery plan begins to flower