Phoronida (fərŏnˈədə), small phylum of slender, wormlike marine tube-dwellers, typically found in temperate, shallow seas. About 10 species are known. Although the body is free in the tube, the organisms extend only a crown of ciliated tentacles (the lophophore) to capture food. Water currents generated by the lophophore cilia sweep food particles against mucus secreted at the base of the tentacles and ciliated grooves propel the food to the mouth. Phoronids have a U-shaped digestive tract, a blood-vascular system containing hemoglobin, and excretory organs called metanephridia. The coelom, or body cavity, is divided into compartments resembling those seen in the Ectoprocta and the Brachiopoda, which are phyla related to the Phoronida; the compartments also resemble those of the Echinodermata. Phoronids are ancient, and some zoologists have suggested they are the ancestors of the brachiopods because of similarities in embryology. Tubes seen in early paleozoic sandstones appear to be identical with modern phoronid tubes, but little is known of their history.
The Columbia Electronic Encyclopedia™ Copyright © 2022, Columbia University Press. Licensed from Columbia University Press. All rights reserved.

A small, relatively homogeneous group of animals now generally considered to constitute a separate animal phylum. Two genera, Phoronis and Phoronopsis, and about 16 species are recognized. 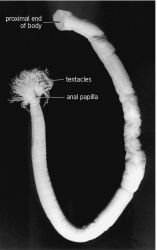 Phoronids may occur in vertical tubes placed just below the surface in intertidal or subtidal mud flats, or as feltlike masses of intertwined tubes attached to rocks, pilings, or old logs in shallow water. In both cases the tubes, composed basically of a secreted, parchmentlike material, are encrusted with small particles of sand or shell. A third living habit concerns those phoronids found inside channels, probably self-made, in limestone rock or the shells of dead pelecypod mollusks.

The geographical distribution of phoronids appears to be worldwide in temperate and tropical seas. There are no records of phoronids from the polar regions.

The body is more or less elongate, ranging in length from about 1.6 to 8 in. (4 to 20 cm), and bears a crown of tentacles arranged in a double row surrounding the mouth which is usually crescent-shaped (see illustration). The anus occurs at the level of the mouth and is borne on a papilla immediately outside the double row of tentacles. The digestive tract is therefore U-shaped, the mouth and anus opening close together at one end of the animal. The tentacles rest on a connective tissue base known as the lophophore. Associated with the mouth is a ciliated flap of tissue known as the epistome. See Lophophore

The phylum includes both dioecious animals and hermaphrodites. All phoronids may reproduce sexually, and in most cases the life history includes the pelagic actinotroch larva. Some species reproduce asexually by transverse fission.

[fə′rän·ə·də]
(invertebrate zoology)
A small, homogeneous group, or phylum, of animals having an elongate body, a crown of tentacles surrounding the mouth, and the anus occurring at the level of the mouth.
McGraw-Hill Dictionary of Scientific & Technical Terms, 6E, Copyright © 2003 by The McGraw-Hill Companies, Inc.

Feedback
Flashcards & Bookmarks ?
Please log in or register to use Flashcards and Bookmarks. You can also log in with
Flashcards ?
My bookmarks ?
+ Add current page to bookmarks
Mentioned in ?
References in periodicals archive ?
In particular, phoronid transcriptomes contained a number of TLR contigs with at least 6 putative homologs recovered for Phoronis vancouverensis and 4 for Phoronis psammophila (Table 3).
Repurposed transcriptomic data facilitate discovery of innate immunity toll-like receptor (TLR) genes across lophotrochozoa
The shells of every abalone were examined in the farm to detect shell abnormalities associated with the presence of phoronids. All individuals were measured (total length) and the abalone that presented significant abnormalities was sampled for laboratory analyses.
The first report of phoronis sp. (Phoronida) in red abalone (Haliotis rufescens) in Chile
Phoronids and brachiopods have different levels of functional and developmental integration of their larval and juvenile tissues among species (detailed in Santagata and Zimmer, 2002), but in general, the juvenile neuromuscular system is developed precociously within the body of the larva, and neuronal connections are shared between the larval nervous system (apical ganglion and tentacular nerve rings) and the juvenile neuromuscular system.
Evolutionary and structural diversification of the larval nervous system among marine bryozoans
Species of phoronid are also noted for their wide geographical distributions and often occur in conspecific aggregations (Emig, 1982; Zimmer, 1991).
A waterborne behavioral cue for the actinotroch larva of Phoronis pallida (Phoronida) produced by Upogebia pugettensis (Decapoda: Thalassinidea)
Within the Lophophorata, the bryozoan with multiciliated cells took 1.7 to 3 times longer to develop to swimming than the phoronid and brachiopod with uniciliated cells.
Evolution of fast development of planktonic embryos to early swimming
Indeed, S1 has an extensive distribution in larval echinoderms and is probably of equal importance to larval function as 5HT.Equivalent patterns of neuropeptide localization in other marine larvae have been reported for the molluscan neuropeptide FMRFamide, which is also found in central larval ganglia and peripheral nerves in larval phoronids (Hay-Schmidt, 1990).
Development of Serotonin-like and SALMFamide-like Immunoreactivity in the Nervous System of the Sea Urchin Psammechinus miliaris
Other invertebrate larvae from taxa such as polychnetes, nemertines, echinoderms, and phoronids have embryonic nervous systems that are very similar to those of molluscs (Hay-Schmidt, 1990a, b, c; 1995).
Development of Embryonic Cells Containing Serotonin, Catecholamines, and FMRFamide-Related Peptides in Aplysia californica
For larvae of groups as diverse as phoronids, polychaetes, and chitons, all of which possess an apical tuft of elongate and somewhat stiff cilia, presettlement behavior typically includes swimming near the substratum with their apical ends downward so that the apical tuft brushes or is pressed against the substratum (Barnes and Gonor, 1973; Nott, 1973; Zimmer, 1991; unpublished personal observations on the serpulid polychaete Hydroides elegans).
The Apical Sensory Organ of a Gastropod Veliger Is a Receptor for Settlement Cues
The one or more mechanisms by which [Cs.sup.+] induces metamorphosis in marine invertebrate larvae have not been determined with certainty, although [Cs.sup.+] has been tested with positive results in coelenterates (Freeman and Ridgway, 1987; Hujer and Lesh-Laurie, 1995), phoronids (Herrmann, 1995), a sponge (Woollacott and Hadfield, 1996), and a polychaete (Herrmann, 1986).
Stimulation of metamorphosis in the polychaete Hydroides elegans Haswell (Serpulidae)
A close relationship between phoronids and spiralians has also been inferred from studies of 18s ribosomal DNA sequences (Halanych et al., 1995).
Ciliary feeding assisted by suction from the muscular oral hood of phoronid larvae
Also referred to as the apical sensory organ, the apical organ, or the cephalic sensory organ, the AG has so far been extensively described in the embryos, larvae, or both of cnidarians (Chia and Koss, 1979; Fukui, 1991), turbellarians (Lacalli, 1982; 1983), polychaetes (Lacalli, 1981; 1984), molluscs (Bonar, 1978; Chia and Koss, 1984; Page, 1992, Tardy and Dongard, 1993; Kempf and Page, 1995); brachiopods (Hay-Schmidt, 1992); phoronids (Hay-Schmidt, 1989; Lacalli, 1990), echinoderms (Bisgrove and Burke, 1986; Chia et al., 1986; Nakajima, 1988; Nakajima et al., 1993), and hemichordates (Dautov and Nezlin, 1992).
Fine structure of the apical ganglion and its serotonergic cells in the larva of Aplysia californica
The lophophorates (consisting of the phoronids, brachiopods, and bryozoans) and the pterobranch hemichordates are sessile suspension-feeding marine organisms that use ciliated tentacles to capture algae.
Convergence in the feeding apparatuses of lophophorates and pterobranch hemichordates revealed by 18S rDNA: an interpretation