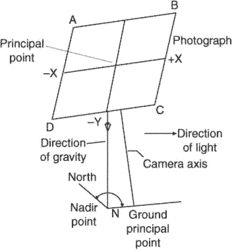 i. The same as nadir
ii. As it relates to aerial photogrammetry, it is the point where a plumb line dropped from the front nodal point pierces the photograph. This point is vertically beneath the exposure station. In the illustration, it is point N. Also called a photo nadir and a photo plumb point.

The point at which a vertical line through the perspective center of the camera lens intersects the photo plane. It is the point in the photo plane immediately below the lens at the instant of exposure. Also called camera nadir, photo plumb point, and a nadir point
An Illustrated Dictionary of Aviation Copyright © 2005 by The McGraw-Hill Companies, Inc. All rights reserved