The increase in electrical conductivity caused by the excitation of additional free charge carriers by light of sufficiently high energy in semiconductors and insulators. Effectively a radiation-controlled electrical resistance, a photoconductor can be used for a variety of light- and particle-detection applications, as well as a light-controlled switch. Other major applications in which photoconductivity plays a central role are television cameras (vidicons), normal silver halide emulsion photography, and the very large field of electrophotographic reproduction. See Optical modulators, Particle detector

Although all insulators and semiconductors may be said to be photoconductive, that is, they show some increase in electrical conductivity when illuminated by light of sufficiently high energy to create free carriers, only a few materials show a large enough change, that is, show a large enough photosensitivity, to be practically useful in applications of photoconductors.

The variation of photoconductivity with photon energy is called the spectral response of the photoconductor. Spectral response curves typically show a fairly well-defined maximum at a photon energy close to that of the bandgap of the material, that is, the minimum energy required to excite an electron from a bond in the material into a higher-lying conduction band where it is free to contribute to the conductivity. This energy ranges from 3.7 eV, in the ultraviolet, for zinc sulfide (ZnS) to 0.2 eV, in the infrared, for cooled lead selenide (PbSe).

Another major characteristic of a photoconductor of practical concern is the rate at which the conductivity changes with changes in photoexcitation intensity. If a steady photoexcitation is turned off at some time, for example, the length of time required for the current to decrease to 1/e of its initial value is called the decay time of photoconductivity, td. The magnitude of the decay time is determined by the lifetime π and by the density of carriers trapped in imperfections as a result of the previous photoexcitation, which must now also be released in order to return to the thermal equilibrium situation. 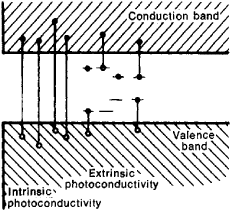 All nonmetallic solids exhibit photoconductivity to some extent. The photoconductivity of semiconductors, such as Ge, Si, Se, CdS, CdSe, InSb, GaAs, and PbS, is the best studied and most widely used in technology. The magnitude of the primary photoconductive effect is proportional to the quantum efficiency –n, which is the ratio of the number of carriers produced and the total number of absorbed photons, and to the lifetime of excess photocarriers, that is, of excess charge carriers generated by the light. When visible light is used for illumination, η, is usually less than unity because of competing processes that result in the absorption of light but are not associated with the production of photocarriers, that is, associated with the excitation or production of excitons, impurity atoms, or lattice vibrations. When a substance is exposed to ultraviolet or harder radiation, η > 1, since the photon energy is high enough not only to eject an electron from a filled band but also to provide the electron with sufficient kinetic energy for impact ionization. 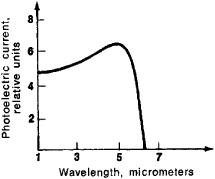 Other types of photoconductivity are possible which are not associated with a change in the free-carrier concentration. For example, when long-wavelength electromagnetic radiation, which does not cause interband migration and does not ionize impurity centers, is absorbed by free carriers, the energy of the carriers is increased. Such an increase leads to a change in carrier mobility and, consequently, to an increase in electrical conductivity. Such secondary photoconductivity decreases at high frequencies and is not frequency dependent at low frequencies. The change in mobility upon exposure to radiation may be caused not only by an increase in carrier energy but also by the effect of the radiation on electron scattering in the crystal lattice.

The study of photoconductivity is one of the most effective ways to investigate the properties of solids. The photoconductive effect is used to produce photoconductive cells and radiation detectors with a low time constant that are sensitive over a very broad wavelength range, namely, from γ-rays to microwaves.

Feedback
Flashcards & Bookmarks ?
Please log in or register to use Flashcards and Bookmarks. You can also log in with
Flashcards ?
My bookmarks ?
+ Add current page to bookmarks
Mentioned in ?
References in periodicals archive ?
Torres-Torres, "Photoconductive logic gate based on platinum decorated carbon nanotubes," Applied Optics, vol.
XOR Logic Gate by Carbon/Metal Nanoinks Based on a Double-Stage Optical Kerr Gate Configuration
In 2012, Picometrix introduced a hand-held thickness measuring device called single-point gauge, which measures one point on a plastic wall at a time, and a T-Ray 5000 solid-state, photoconductive switch type terahertz sensor.
Terahertz is Making Waves in the Plastics Sector
It has been widely used as a wide band gap window material in hetero-junction photovoltaic solar cells and photoconductive devices.
Preparation and characterization of zinc doped CdS thin films for photovoltaic applications
The experimental setup Z-1 (Zomega Terahertz Corporation, New York, USA), which utilizes photoconductive antennas as generators and detectors [33], nominally ranges from 0.1~3.0 THz in bandwidth.
Enhanced Measurement of Paper Basis Weight Using Phase Shift in Terahertz Time-Domain Spectroscopy
CuO is a narrow band-gap (1.2 eV) p-type semiconductor with photoconductive and photochemical properties and has found applications in gas sensing [3, 4], in catalysis [5-7], as antimicrobial agent [8-11], and in batteries [12], magnetic devices [13-15], super capacitors [16], and field emission [17].
Synthesis and Characterization of CuO, Ti[O.sub.2], and CuO-Ti[O.sub.2] Mixed Oxide by a Modified Oxalate Route
Currents generated by photoconductive effects can degrade measurements, especially on high-resistance samples.
Resistivity measurements using a four-point collinear probe
An article in The Science News-Letter in 1948 describes the process arduously and includes components done by hand at that time, which are now done by the machine, namely the production of a photoconductive plate which includes vigorous rubbing of the plate to make it electrically charged.
Certified copies: 1980s New Zealand photocopy journals & the xerographic aesthetic
Light sensors fall into four types, depending on how they react to the input (light): photoemissive, photoconductive, photovoltaic, and photojunction.
Learning About Input and Output
The selections that make up the bulk of the text cover photomixers, photoconductive switches, electronic THz generation and detection, and many other related subjects.
Semiconductor Terahertz Technology: Devices and Systems at Room Temperature Operation
Panasonic Corporation has developed a new wide-dynamic- range technology that can improve simultaneous-capture wide dynamic range 100 times wider than conventional results can deliver, using a CMOS image sensor with an organic photoconductive film (OPF).
PANASONIC DEVELOPS WIDE-DYNAMIC-RANGE TECHNOLOGY