see aerial and satellite photographyaerial and satellite photography,
technology and science of taking still or moving-picture photographs from a camera mounted on a balloon, airplane, satellite, rocket, or spacecraft. In the 19th cent., photographers such as Thaddeus Lowe and George R.
..... Click the link for more information. .
The Columbia Electronic Encyclopedia™ Copyright © 2013, Columbia University Press. Licensed from Columbia University Press. All rights reserved. www.cc.columbia.edu/cu/cup/

The process of producing accurate maps by tracing outlines of contours that are produced by stereo aerial photographs with specialized stereoscopic plotters.
Illustrated Dictionary of Architecture Copyright © 2012, 2002, 1998 by The McGraw-Hill Companies, Inc. All rights reserved
The following article is from The Great Soviet Encyclopedia (1979). It might be outdated or ideologically biased.

the scientific and technical discipline concerned with the determination of the dimensions, shape, and position of objects from examination of their images in photographs. The photographs are obtained either directly by conventional, moving-film aerial, or panoramic cameras or by using radar, television, infrared-heat-sensing, or laser systems. Photographs produced by conventional cameras are the most widely used, especially in aerial photographic surveys. In the theory of photogrammetry these photographs are considered the central projection of the object. Deviations from the central projection caused by lens distortion, deformation of the film and print paper, and other sources of error are taken in account in the calibration data for the aerial camera and the photographs. Photogrammetry uses both individual photographs and stereoscopic pairs; the use of stereopairs makes it possible to obtain a stereoscopic model of objects. The branch of photogrammetry that studies objects by means of stereopairs is called stereophotogrammetry.

The positioning at the moment the photograph is taken (see Figure 1) is determined by three elements of relative orientation—the camera focusing distance f and the coordinates of the principal point o (xo and io)—and by six elements of absolute orientation—the coordinates of the center of projection S (Xs, Ys, and Zs, the longitudinal (α) and transverse (ω) angles of inclination of the photograph, and the angle of rotation (K). The following relationship exists between the coordinates of the point of an object and the object’s image on the photograph:

are the direction cosines.

BX, BY, and BZ are projections of base B on the axes of the coordinate. If the elements of absolute orientation of the stereopair are known, then the coordinates of the point of the object can be determined from formula (4). This is known as the direct intersection method. The position of a point of an object may be found by means of a single photograph in the special case where the object is flat, for example with geographical plains (Z = const). The coordinates x and y of the points of the photograph are measured on a monocular comparator or stereocomparator. The elements of relative orientation are known from the results of camera calibration; the elements of absolute orientation can be determined when photographing the objects or during the process of aerial triangulation. 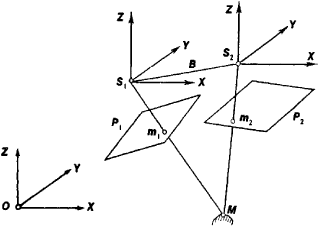 The elements of mutual orientation make it possible to establish photographs in the same position relative to one another that they occupied when the object was photographed. In this case, each pair of corresponding rays, for example, S1m1 and S2m2, intersects and forms a point (m) of the model. The set of rays belonging to the photograph is called a bundle and the center of projection S1 or S2 is called the vertex of the bundle. The scale of the model remains unknown because the distance S1S2 between the peaks of the bundles is chosen arbitrarily. The corresponding points m1 and m2 of the stereopair are set in a single plane passing through the base S1S2. Therefore,

Assuming that the approximate values of the elements of mutual orientation are known, equation (6) can be put in the linear form

where δα1’, . . ., δκ2’ are corrections to the approximate values of the unknowns; a,. . . ., e are partial derivatives of function (6) with respect to the variables α1’, . . ., κ’; and I is the value of function (6) computed for the approximate values of the unknowns. In order to determine the elements of mutual orientation, the coordinates of at least five points of the stereopair are measured; then equation (7) is compiled and solved by the method of successive approximations. The coordinates of the points of the model are computed according to formula (4); an arbitrary length is selected for base B with the following assumptions: XS1 = YS1 = ZS1 = 0; BX = B; and BY = Bz = 0. In this case the spatial coordinates of points m1 and m2 are found from formula (2), and the direction cosines by formula (3). For photograph P1 the coordinates are found from the elements α1’, ω1’ = 0, κ1’; for photograph P2 they are found from the elements α2’; ω2’, κ2’.

In order to determine the seven elements of absolute orientation of the model (XS1, ZS1, ZS1, ξ, η, θ and t), equation (8) is written for three or more control points and then solved. The coordinates of the control points are found by geodetic methods or by means of aerial triangulation. The set of points of an object whose coordinates are known forms a numerical model of the object, which may be used for drawing a map and solving various engineering problems, for example, finding the optimum route for a road. In addition to analytic methods of processing photographs, analogue methods based on the use of various photogrammetric instruments, such as rectifiers, stereographs, and stereoprojectors, also find application. Panoramic photographs and photographs from moving-film aerial cameras, as well as radar, television, infrared-heat-sensing, and other photographic systems, greatly expand the possibilities of photogrammetry, particularly in space studies. However, they do not present a single center of projection, and their elements of absolute orientation change continuously in the process of constructing an image, which makes it difficult to use such photographs for measurement purposes.

Photogrammetric techniques possess several fundamental advantages: high productivity, since the images of objects, rather than the objects themselves, are measured; high accuracy, due to the use of precision equipment to obtain and measure the photographs and the use of strict procedures for processing the results of measurements; the possibility of studying both fixed and moving objects; and completely objective measurement results. In addition, measurements can be made at some distance removed from the object, which is particularly important where objects are inaccessible (such as an airplane or projectile in flight) or when there would be danger to an observer in the area of the object (as with an active volcano or nuclear explosion).

Photogrammetry is widely used to make maps of the earth, other planets, and the moon; to measure the geologic elements of rock beds and to document mining excavations; to study the movement of glaciers and the dynamics of the thawing of the snow cover; to determine forest valuation characteristics; and to investigate soil erosion and observe changes in vegetation cover. It is also used in the study of sea waves and currents and in underwater surveys and prospecting; in the design, construction, and operation of engineering structures; in the monitoring of the condition of architectural ensembles, buildings, and monuments; and in the determination of coordinates of fire positions and targets in military operations.

[‚fōd·ə′gram·ə·trē]
(engineering)
The science of making accurate measurements and maps from aerial photographs.
The practice of obtaining surveys by means of photography.
McGraw-Hill Dictionary of Scientific & Technical Terms, 6E, Copyright © 2003 by The McGraw-Hill Companies, Inc.

The technology of obtaining reliable distance measurements by photograph.
McGraw-Hill Dictionary of Architecture and Construction. Copyright © 2003 by McGraw-Hill Companies, Inc.

Feedback
Flashcards & Bookmarks ?
Please log in or register to use Flashcards and Bookmarks. You can also log in with
Flashcards ?
My bookmarks ?
+ Add current page to bookmarks
Mentioned in ?
References in periodicals archive ?
By utilizing this UAS-enabled photogrammetry technology, AeroTEC was able to provide WSDOT a runway obstacle report at a far higher degree of accuracy and lower cost than traditional methods.
AeroTEC, WSDOT partner to conduct UAS survey at Washington State airports
* Drone photogrammetry and digital elevation modeling
Go Metals Completes Exploration Program at Monster
By learning the skills that Photogrammetry offers, nontechnical stakeholders can use this science to document their local heritage.
Documenting local heritage structures through photogrammetry
3D photogrammetry is a new tool used in archaeology, palaeontology, architecture, the entertainment industry and in the biological sciences.
3D photogrammetry workshop
3D close-range photogrammetry was used in order to objectively evaluate the reduction in patient complaints and changes in the MM before and after BTX-A treatment.
Assessment of changes in masseter muscle by three-dimensional close-range photogrammetry after Botulinum toxin type-A injection: A case report with review of literature
In one of two volumes on photogrammetry, engineers contribute to SAE International's fourth collection of technical peer-reviewed papers on collision reconstruction methodologies.
Collision Reconstruction Methodologies; Volume 3A: Photogrammetry
Thus, the objective of this study was to present a non-ionizing method, based on 2D photogrammetry by computer vision, for the angular measurement of vertebral deviations, aiming at the diagnosis and follow-up evaluation of AIS.
Non-ionizing method of screening adolescent idiopathic scoliosis in schoolchildren
Photogrammetry (from Greek: photo - light, gram - drawing, metreo - measurement) is a technology based on standard photography and projective geometry and was originally used to digitize large objects such as buildings, oil platforms and warehouses and is traditionally considered part of the geodesy belonging to the distance research direction.
Digitalization of Bulgarian Cultural Heritage
Three-dimensional (3D) photogrammetry is a method of image-based modeling in which data points in digital images, taken from offset viewpoints, are analyzed to generate a 3D model.
Three-Dimensional Pathology Specimen Modeling Using "Structure-From-Motion" Photogrammetry: A Powerful New Tool for Surgical Pathology
Common methods use strain gauges and image correlation photogrammetry, while some other methods are available which measure the displacement and then calculate the strain.
Efficiency of image correlation photogrammetry technique in measuring strain
With a dual frequency, scientific grade global navigation satellite system (GNSS) built into the tablet, it can position 3D point clouds created from aerial photogrammetry using GPS, GLONASS and GALILEO receivers.
Rugged tablet integrates GNSS, RTK positioning