buckwheat, common name for certain members of the Polygonaceae, a family of herbs and shrubs found chiefly in north temperate areas and having a characteristic pungent juice containing oxalic acid. Species native to the United States are most common in the West. The largest genus of the family, Polygonum (or Persicaria), contains the knotweeds and the smartweeds, found in many parts of the world. The common smartweed (P. hydropiper) is an annual sometimes called water pepper for its acrid quality. Some knotweeds are in the genus Fallopia, such as the Japanese knotweed (F. japonica), a bamboolike perennial that can exceed 15 ft (4.5 m) in height; introduced to the United States as a landscape plant, it has become an invasive species. Several species of the dock genus (Rumex) are sorrels (the common name used also for the similarly acrid but unrelated oxalis). The garden, or green, sorrel (R. acetosa) and the sheep, red, or field sorrel (R. acetosella) have long been used in Europe for salads and greens. Among the plants used as potherbs are the patience or spinach dock (R. patientia) and the tanner's dock (R. hymenosepalus); the latter is the source of canaigre, a substance used for tanning. Economically the important members of the family are of the rhubarb genus (Rheum) and the buckwheat genus (Fagopyrum), both native to Asia. Most of the rhubarb cultivated for the edible thick, fleshy leafstalks is R. rhaponticum, called also pieplant and wine plant. Medicinal rhubarb is obtained from this and other species of the genus. The cultivated buckwheat (F. esculentum) has been grown in the Old World since the Middle Ages as a honey plant and for its characteristic three-cornered grain, which is utilized for poultry and stock feed. Buckwheat flour is used in the United States, Japan, and eastern Europe; the plant is sown as a cover crop and is a food staple. The genus Eriogonum includes the wild, or yellow, buckwheat (E. alleni), restricted to the Appalachian shale barrens, and many Western species, e.g., the desert trumpet (E. inflatum), a desert flower of arid plains and plateaus. The interesting genus Koenigia has only one species, but it is found in the Arctic, in the Himalayas, and in Tierra del Fuego. Buckwheat is classified in the division Magnoliophyta, class Magnoliopsida, order Polygonales, family Polygonaceae.
The Columbia Electronic Encyclopedia™ Copyright © 2022, Columbia University Press. Licensed from Columbia University Press. All rights reserved. 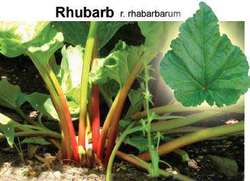 Eat only the top half of the stem, not the leaf, root or bottom of the stem. The leaf is poisonous.Very good for cleaning out the intestinal tract. Very sour, super tart. Rhubarb contains pectin which is a preservative, so if you add rhubarb to food you are cooking (if you cook your food), the food will not spoil. Produces 2 crops in the year, just before cherries and strawberries in the spring, so you can use it to preserve the fruit, and then again in the fall to help preserve the apples, pears etc. Rhubarb has greenish white or rose reddish clumpy flower clusters. Leaves sometimes confused with burdock, which has “velcro” balls and purplish red spiky flowers. Small amounts of rhubarb root are used as a laxative, but the stem is safer because the compounds are not as concentrated Experiments have shown rhubarb root to lower blood glucose levels in diabetic mice. The stem can be dried and powdered also.
Edible Plant Guide © 2012 Markus Rothkranz

What does it mean when you dream about rhubarb?

The bitter rhubarb plant, which takes on a sweet flavor when cooked with sugar, is a symbol of taking the good (sweet) with the bad (bitter). Because it is often used as a purgative, it can also represent freeing oneself of something unwanted.

1. any of several temperate and subtropical plants of the polygonaceous genus Rheum, esp R. rhaponticum (common garden rhubarb), which has long green and red acid-tasting edible leafstalks, usually eaten sweetened and cooked
2. the leafstalks of this plant
3. a related plant, Rheum officinale, of central Asia, having a bitter-tasting underground stem that can be dried and used medicinally as a laxative or astringent
Collins Discovery Encyclopedia, 1st edition © HarperCollins Publishers 2005

Feedback
Flashcards & Bookmarks ?
Please log in or register to use Flashcards and Bookmarks. You can also log in with
Flashcards ?
My bookmarks ?
+ Add current page to bookmarks
Mentioned in ?
References in periodicals archive ?
When we were young, we never heard of rhubarb: all we had was "pie plant." While it's used for sauce (try mixing rhubarb with strawberries for strawbarb sauce), and it makes excellent juice and wine, its star role is in pie.
In spring, homesteaders eat eggs
Soon after, it was brought to the U.S., where it earned the nickname "pie plant," because of its popularity as a filling for pies.
Tart Rhubarb may benefit bones and eyes
For further information about Comas pie plants please contact European Process Plant Limited, Epsom, Surrey.
Pie plant perfection from Comas: sweet or savoury, round or square, whatever the requirement Comas has the solution to meet your pie, quiche and tart production needs