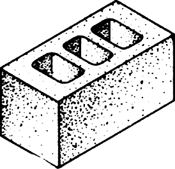 Feedback
Flashcards & Bookmarks ?
Please log in or register to use Flashcards and Bookmarks. You can also log in with
Flashcards ?
My bookmarks ?
+ Add current page to bookmarks
Mentioned in ?
References in periodicals archive ?
He caught his match- winning fish from Whitby East Pier block, and landed the super pool with four fish for 12lb 10.25oz.
Whiting - from wall to wall
I had a collection of used cement pier blocks that I set in a 12-footdiameter circle about 40 inches apart from each other--the same width of the pallets I had available.
After all the pallets were prepared, I screwed 4-by-4-inch upright supports to the pier blocks, and then attached the pallets to the uprights with 3-inch screws.
DIY COB CABIN: Pallets form the frame of this sturdy, durable, creative cob structure
A choice for support when frost protection is not an issue is the use of precast pier blocks. These units are tapered, concrete blocks with a square opening in the top designed for the placement of a treated 4 x 4 post (Figure 29-11).
To install precast pier blocks, locate the center of the post location.
Chapter 29 Wood decks and platforms
Ann Krutsinger said she hit on the idea a year ago, after digging in the mud to install hefty pier blocks to build a walkway on.
The target customer is a do-it-yourselfer who doesn't want the hassle of digging large pier blocks into the ground, or installing brick or paver walkways, Ann Krutsinger said.
Local couple hoping to step up retailers' interest in path blocks
These pier blocks rest on concrete patio pavers that spread the weight over the soil.
Build this cabin in three weeks for under $2,000!
A couple of readers hide concrete piers behind the tree, then run line from eye screws set in the pier blocks way up the trunk of the tree.
Life with monster Christmas trees
Being a Third World town Watsonville is cheaply built, and though the price of a handful of nails would have meant foundation posts securely toenailed in, a lot of the poorer houses were just resting on their pier blocks until the tremors pushed them off.
In the midst of life
Position foundation skids on the pier blocks and recheck level.
The world of the microhouse: living large just isn't the answer for everyone. Here's how to build a slightly smaller dream