A name given to manifestations of the magnetic self-attraction of parallel electric currents having the same direction. The effect at modest current levels of a few amperes can usually be neglected, but when current levels approach a million amperes such as occur in electrochemistry, the effect can be damaging and must be taken into account by electrical engineers. The pinch effect in a gas discharge has been the subject of intensive study, since it presents a possible way of achieving the magnetic confinement of a hot plasma (a highly ionized gas) necessary for the successful operation of a thermonuclear or fusion reactor.

The law of attraction which describes the interaction between parallel electric currents was discovered by A. M. Ampère in 1820. For a cylindrical wire of radius r meters carrying a total surface current of I amperes, it manifests itself as an inward pressure on the surface (Fig. 1) given by I2/2 × 107πr2 pascals. For the electric currents of normal experience, this force is small and passes unnoticed, but it is significant that the pressure increases with the square of the current, I2. For example, at 25,000 amperes the pressure amounts to about 1 atm (100 kilopascals) for a wire of 1-cm radius, but at 106 amperes the pressure is about 1600 atm or about 12 tons in.-2 (160 megapascals).

Pinch pressure on a current-carrying conductor

There are a number of ways in which the magnetic field of a fusion reactor can be arranged around the plasma to hold it together, and one of these methods is the pinch effect. A fusion reactor using this type of confinement would ideally be a toroidal tube in which the confined plasma would carry a large electric current induced in it by magnetic induction from a transformer core passing through the major axis of the torus. The current would have the double function of ohmically heating the plasma and compressing the plasma toward the center of the tube.

Characteristically, as can be shown by high-speed photography, the pinch forms at the inner surface of a discharge tube wall and contracts radially inward, forming an intense line, the pinch, on the axis; the pinch rebounds slightly; the contracted discharge rapidly develops necks and kinks; and in a few microseconds all structure is lost in an apparently turbulent glowing gas which fills the tube. Thus, the pinch turns out to be unstable, and plasma confinement is soon lost by contact with the wall. The cause of the instability is easily seen qualitatively: The pinch confinement can be described as being caused by the magnetic field lines encircling the pinch which are stretched longitudinally but which are in compression transversely (Fig. 2). For a uniform cylindrical pinch, the magnetic pinch pressure is everywhere equal to the outward plasma pressure, but at a neck or on the inward side of a kink, the magnetic field lines crowd together, creating a higher magnetic pressure than the outward gas pressure. Consequently, the neck contracts still further, the kink cuts in on the concave side and bulges out on the convex side, and both perturbations grow. The instability has a disastrous effect on the confinement time. 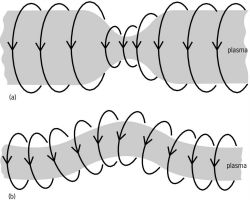 The term theta pinch has come into wide usage to denote an important plasma confinement system which relies on the repulsion of oppositely directed currents and which is thus not in accord with the original definition of the pinch effect (self-attraction of currents in the same direction). Plasma confinement systems based on the original pinch effect are known as Z pinches.

Tokamak is essentially a low-density, slow Z pinch in a torus with a very strong longitudinal field. The helical magnetic field lines, resultant from the externally applied field and that of the pinch, do not close, that is, do not complete one revolution of the minor axis in going around the major axis of the torus once. This is known theoretically to prevent the growth of certain helical distortions of the plasma. The performance of tokamak experiments has raised the possibility of achieving a net power balance. See Nuclear fusion

the tendency of an electric-current channel in a compressible conducting medium to decrease its cross-section under the action of the magnetic field produced by the current. The phenomenon was first described in 1934 by the American scientist W. Bennett with respect to streams of fast charged particles in a gas-discharge plasma. The term “pinch effect” was introduced in 1937 by the British physicist L. Tonks in an investigation of arc discharge.

The mechanism of the pinch effect can be understood most easily through the example of a current I flowing along the axis of a cylinder filled with a conducting medium. The lines of force of the magnetic field generated by I have the form of concentric circles whose planes are perpendicular to the axis of the cylinder. The electrodynamic force per unit volume of a conducting medium with a current density j is equal to (1/c) [jB] in the cgs system of units; the force is directed toward the axis of the cylinder and tends to compress the medium. The state that arises is the pinch effect. (Here, the square brackets indicate a vector product; c is the speed of light in a vacuum; and B is the magnetic induction in the unit volume under consideration.) The pinch effect may also be considered a simple consequence of Ampere’s law, which describes the magnetic attraction of the individual parallel current filaments whose aggregate is the current cylinder. Magnetic compression is impeded by the gas-kinetic pressure of the conducting medium resulting from the thermal motion of the medium’s particles; the forces of this pressure are directed from the axis of the current channel. When the current is sufficiently large, however, the magnetic pressure differential becomes greater than the gas-kinetic differential and the current channel contracts—the pinch effect arises.

The pinch effect requires that the concentrations of the carriers of charges of opposite signs in the medium be approximately equal. In fluxes of carriers of charges of one sign, the electric field of the space charge effectively impedes current contraction. When sufficiently large currents pass through a gas, the gas changes to the state of a completely ionized plasma consisting of charged particles of both signs; the pinch effect squeezes the plasma column away from the walls of the chamber in which the discharge occurs. The conditions are thus created for magnetic thermal insulation of the plasma. This property of powerful self-constricting discharges, which are called pinches, explains scientists’ interest in the pinch effect as the simplest and most encouraging mechanism for the confinement of high-temperature plasma. Such confinement is of importance in the problem of controlled thermonuclear fusion.

The conditions under which the gas-kinetic pressure of the plasma nk(Te + Ti) becomes equal to the magnetic pressure of the field of the current I are given by Bennett’s equation (2I/cr)2/8π = nk(Te + Ti). Here, n is the number of particles per unit volume, r is the pinch radius, Te and Ti are the electron and ion temperatures, respectively, n is the number of electrons per unit volume and is equal to the number of ions because of the quasi-neutrality of the plasma, and k is the Boltzmann constant. It follows from Bennett’s formula that the large, but quite feasible, current of ~ 106 amperes (A) is required to attain the minimum temperature (T ~ 108°K) at which thermonuclear fusion may be of interest as an energy source.

Investigation of pinches in deuterium began simultaneously in 1950 and 1951 in the USSR, the USA, and Great Britain within the framework of national programs for controlled thermonuclear fusion. Attention was paid primarily to two types of pinches—linear and toroidal. It was believed that when a current passed through the pinch, the plasma would be heated not only through Joule heating but also by adiabatic compression of the pinch—that is, by compression occurring without exchange of energy with the environment.

The early experiments, however, showed that the pinch effect is accompanied by the development of various plasma instabilities. Necks (“sausage” deformations), kinks, and helical disturbances are formed. The growth of these perturbations occurs extraordinarily quickly and results in the breakdown of the pinch—the pinch ruptures or plasma is thrown onto the wall of the chamber. Simple pinches were found to be subject to practically all the types of instabilities of a high-temperature plasma and thus can be used to study these instabilities and to test various methods of stabilizing the plasma column.

A current of ~106 A in linear pinch units is produced by the discharge of powerful condenser batteries across a gas-filled gap. In some cases, the rate of current growth may be ~1012 A/sec. The most important factor here is not Joule heating but the electrodynamic acceleration of the thin outer layer, or skin, of the current column toward its axis with the accompanying formation of a powerful shock wave that converges on the axis. The conversion of the energy accumulated by the wave into thermal energy creates a plasma with a temperature much greater than Joule heating could produce. On the other hand, the conversion of the energy of the electric current in a pinch into thermal energy becomes considerably more efficient when the turbulence that arises with the development of microinstabilities begins to make the decisive contribution to the electrical resistance of the plasma.

Under certain conditions, powerful pulsed pinches in rarefied deuterium become sources of hard radiation, including neutron radiation and X rays. This phenomenon was discovered in the USSR in 1952.

Although the problem of controlled thermonuclear fusion has not been solved for even the simplest pinches, self-constricting discharges have been of great importance for plasma research. They have permitted the obtaining of a dense plasma with a lifetime that, although short, is sufficient to study the physics of the pinch effect, to create various methods of plasma diagnostics, and to develop a modern theory of plasma processes. The evolution of apparatus making use of the pinch effect has led to the development of many types of plasma devices in which the instabilities of the pinch effect are stabilized by external magnetic fields—for example, Tokamaks and θ pinches—or are used to produce a short-lived high-density plasma in fast processes (plasma focus, micropinches). For this reason, systems based on the pinch effect occupy at the present time an important place in programs for controlled thermonuclear fusion in the USSR, the United States, and the European Atomic Energy Community.

The pinch effect occurs not only in a gas discharge but also in a solid-state plasma, particularly in the strongly degenerate electron-hole plasma of semiconductors.

[′pinch i‚fekt]
(electricity)
Manifestation of the magnetic self-attraction of parallel electric currents, such as constriction of ionized gas in a discharge tube, or constriction of molten metal through which a large current is flowing. Also known as cylindrical pinch; magnetic pinch; rheostriction.
McGraw-Hill Dictionary of Scientific & Technical Terms, 6E, Copyright © 2003 by The McGraw-Hill Companies, Inc.

Feedback
Flashcards & Bookmarks ?
Please log in or register to use Flashcards and Bookmarks. You can also log in with
Flashcards ?
My bookmarks ?
+ Add current page to bookmarks
Mentioned in ?
References in periodicals archive ?
An electro-magnetic pinch effect of the induction heating process is a quality control feature that creates a depression in the surface of the molten metal bath in the heated section.
Melting and pouring