pith, in botany, core of the stem of most plants. Pith is composed of large, loosely packed food-storage cells. As the stem grows older the pith usually dries out, and in some it disintegrates and the stem becomes hollow. In trees the pith becomes much reduced as the woody tissue (xylem) grows. In East Asia, rice paper is made from the pith of some shrubs. Candlewicks are made of the pith of certain rushes.
The Columbia Electronic Encyclopedia™ Copyright © 2022, Columbia University Press. Licensed from Columbia University Press. All rights reserved.

The central zone of tissue of an axis in which the vascular tissue is arranged as a hollow cylinder. Pith is present in most stems and in some roots. Stems without pith rarely occur in angiosperms but are characteristic of psilopsids, lycopsids, Sphenophyllum, and some ferns. Roots of some ferns, many monocotyledons, and some dicotyledons include a pith, although most roots have xylem tissue in the center.

the central portion of a plant stem, consisting of loose parenchymatous tissue. The internal part of the pith sometimes ruptures with age, forming one large air cavity (Labiatae, Um-belliferae, some Gramineae) or several cavities (grape). Roots have no typical pith. Pith usually consists mainly of thin-walled cells, among which there may be lignified thick-walled cells (apple), latex vessels (Campanulaceae, Convulvulaceae), mucous cells (linden), or canals with volatile oils (Compositae, Umbel-liferae). The parenchymatous cells contain reserve starch, which in woody plants is concentrated mainly in external small-celled layers of the pith—the perimedullary zone. Druses or single crystals of calcium oxalate are often found in the pith.

[pith]
(botany)
A central zone of parenchymatous tissue that occurs in most vascular plants and is surrounded by vascular tissue.
McGraw-Hill Dictionary of Scientific & Technical Terms, 6E, Copyright © 2003 by The McGraw-Hill Companies, Inc. 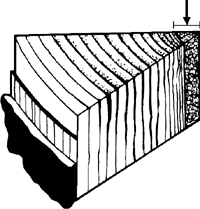 pith
The soft central core of a log.
McGraw-Hill Dictionary of Architecture and Construction. Copyright © 2003 by McGraw-Hill Companies, Inc.

1. the soft fibrous tissue lining the inside of the rind in fruits such as the orange and grapefruit
2. Botany the central core of unspecialized cells surrounded by conducting tissue in stems
3. the soft central part of a bone, feather, etc.
Collins Discovery Encyclopedia, 1st edition © HarperCollins Publishers 2005

Feedback
Flashcards & Bookmarks ?
Please log in or register to use Flashcards and Bookmarks. You can also log in with
Flashcards ?
My bookmarks ?
+ Add current page to bookmarks
Mentioned in ?
References in periodicals archive ?
The pith location did not necessarily have an influence on the volumetric shrinkage.
Impact of juvenile wood on hemlock timber drying characteristics
The regression analysis showed that shrinkage declined significantly with increasing age (number of growth rings from the pith) and that the relationship between shrinkage and age changed significantly at age 15, with shrinkage leveling off after that age.
Longitudinal shrinkage, kiln-drying defects, and lumber grade recovery of red pine (Pinus resinosa Ait.) from a 125-year-old natural stand and a 57-year-old plantation. (Solid Wood Products)
The first pattern showed an initial positive GAdisc value that decreased as the distance from the pith increased (Fig.
SPIRAL GRAIN ON LOGS UNDER BARK REVEALS TWIST-PRONE RAW MATERIAL
For example, Bendtsen and Senft (1986) reported that the xylem after the 13th ring from the pith was determined to be mature wood by using the radial variations in the MOE, MOR, compressive strength, and ovendry density.
Properties of juvenile and mature wood and their effects on the bending properties of lumber in Pinus taeda growing in Tochigi, Japan
92.46%, significantly lower than that of other fractions, i.e., 93.05% to 93.78% in tassel and leaf sheath; 95.16% to 95.58% in whole plant, stem pith, and stem node; and 96.92% to 97.27% in ear husk and stem rind.
Assessment of the nutritive value of whole corn stover and its morphological fractions
Much amount of sugarcane pith is produced annually in the world including Iran.
Fermenting Cell Walls of Processed Sugarcane Pith by Ruminal Bacteria, Protozoa and Fungi
Logs were graded to the damage type that most lowered the internal quality (e.g., log with soft rot may also contain hard rot, hard rot in pith, or color defect in pith).
Wood quality of birch (betula spp.) trees damaged by moose
Yet there are images on pith that derive from classic Chinese art.
Beauty in pursuit of pleasure: 19th-century Chinese export watercolours on pith depict a variety of idealised, attractive women. Ifan Williams traces the sources for these popular images, which appealed to western audiences as representations of the sophistication and exoticism of Chinese civilisation
The backcrossed seed from the solider and more fertile plants were increased in a growth cabinet and scored for pith development.
Registration of sawfly resistant hexaploid spring wheat germplasm lines derived from durum
A Channel 5 spokesman said: "We're sorry that Keith won't do it again, but if we have another programme we'll be open to suggestions as to who can fill Keith's pith helmet."
Starkers Cheggers says no to more shows
It rights the defects of Donald Miller's chatterbox biography of 1989 by drawing out from Mumford's oeuvre the pith of his thought about building, planning and society.
Lewis Mumford and American Modernism: Eutopian Theories for Architecture and Urban Planning
And by reversing the direction of juice flow through the column, the researchers have overcome clogging by pith and other solids that cloud unfiltered juice.
Fighting a juice's bitter end