planetarium, optical device used to project a representation of the heavens onto a domed ceiling; the term also designates the building that houses such a device. A modern planetarium consists of as many as 150 motor-driven projectors mounted on an axis. As the axis moves, beams of light are emitted through lenses and travel in predetermined paths on the ceiling. The juxtaposition of lights reproduces a panorama of the sky at a particular time as it might be seen under optimum conditions. The motions of the celestial bodies are accurately represented, although they can be compressed into much shorter time periods, allowing spectators to see in minutes the motions that may actually take the celestial bodies days or years to complete. A typical planetarium projects the fixed stars, the sun, moon, and planets, and various nebulae. A larger planetarium can reproduce the Milky Way, comets, and more than 9,000 fixed stars. It may also project a set of coordinate lines for locating objects, in addition to pictures of animals and other forms associated with the constellations of the zodiac. Some projectors can take into account the apparent motions of the stars, thereby depicting the sky as it will look thousands of years in the future or as it looked thousands of years in the past, and the most recent planetariums are capable of showing the heavens as they would appear from the moon and from other locations in space. The first of the modern planetariums was constructed in 1924 by the Carl Zeiss Optical Works in Jena, Germany for the Deutsches Museum in Munich. The Adler Planetarium (1930) in Chicago was the first in the United States, and in 1934 the Fels Planetarium was added to the Franklin Institute in Philadelphia. The Hayden Planetarium, a part of the American Museum of Natural History in New York City, was established the following year; in 2000 a new, much more sophisticated Hayden Planetarium was installed in the museum's Rose Center for Earth and Space. By the end of the 20th cent. there were more than 100 major planetariums worldwide and, mainly at schools and colleges, about 1,000 smaller ones.

A mechanical device known as an orrery (for Charles Boyle, earl of Orrery) was a forerunner of the planetarium. It is a framework supporting globes that represent the sun, planets, and natural satellites in their approximate sizes and spatial relations and in their revolutions and rotations. Several orreries were built in the 16th and 17th cent. to explain the Copernican (heliocentric) model of the solar system. Today the orrery finds considerable use as an aid in the teaching of celestial mechanics.

(plan-ĕ-tair -ee-ŭm) An optical instrument by means of which an artificial night sky can be projected onto the interior of a fixed dome so that the positions of the Sun, Moon, planets, stars, etc., may be shown and their motions, real or apparent, demonstrated. The instruments were first built by the German firm of Carl Zeiss from 1913. The term also refers to the building housing such an instrument. Originally, planetarium was the name given to the device that later became known as an orrery.
Collins Dictionary of Astronomy © Market House Books Ltd, 2006
The following article is from The Great Soviet Encyclopedia (1979). It might be outdated or ideologically biased.

(1) An apparatus for projecting images of fixed stars, the sun, the moon, and planets onto a hemispherical domelike screen. The first optical planetarium was designed by the German engineer W. Bauersfeld and was completed in 1924; it was built at the optical works of the firm of Carl Zeiss in Germany. In the 1970’s the Carl Zeiss people’s firm of the German Democratic Republic manufactures three models: the Zeiss Large Planetarium, the Spacemaster for demonstrating spaceflight, and the Zeiss Small Planetarium. Planetariums are also produced in the USA by Spitz, in Japan by Goto, and in the Federal Republic of Germany by Zeiss.

The Large Planetarium has the greatest demonstrative capabilities. It can show all stars down to a stellar magnitude of 6.5. In the present models, the 20 brightest stars have colors corresponding to their spectral classes. The star projectors are globes, one of which projects the stars of the northern celestial hemisphere, and the other the southern. Each sphere has about 16 openings, in which plates made out of metal foil are located. Each plate has up to 200 tiny holes, whose relative positions correspond to those of stars in the sky. The apparatus is also equipped with a Milky Way projector. A globe of smaller diameter projects the names of the constellations. There are also projectors for the sun, the moon, and the five planets visible to the naked eye—Mercury, Venus, Mars, Jupiter, and Saturn. The apparatus has more than 100 projector lamps and a number of electric motors, by means of which diurnal, annual, precessional, and meridian motion can be simulated. Its diurnal motion, which corresponds to the apparent diurnal motion of the celestial sphere, can be accelerated: a rotation can be performed in one to four minutes. The slow shifts of the sun and planets against the stellar background in annual motion can also be speeded up: an entire year can be shown in one minute. The precessional cycle, which in actuality is about 26,000 years, can be acclerated to about 1.5 minutes. Through motion along the meridian the stars can be shown from any geographic latitude on the earth—from the north to the south poles. Special devices project against the stars the celestial equator, the ecliptic, the celestial meridian, and other points and lines of the celestial sphere. There are projectors for auroras, comets, meteors, meteor showers, solar and lunar eclipses, and other celestial phenomena. A schematic diagram of a planetarium projector is given in Figure 1. 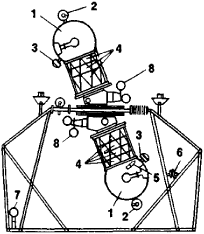 When used with the appropriate panoramas, a planetarium can show not only the terrestrial sky, but also the sky as seen from the moon, Mars, or Venus.

The Spacemaster planetarium is capable of showing the celestial sphere as seen from a spacecraft flying on a course inclined at any angle to the equator.

(2) A scientific educational institution at which popular lectures on astronomy, astronautics, and earth sciences are given. The lectures are accompanied by demonstrations of an artificial sky with the sun, stars, planets, satellites, and various spacecraft. Planetariums may also demonstrate auroras, comets, and meteors; solar and lunar eclipses; panoramas of the moon, Mars, and Venus; and the climatic belts of the earth. The projection equipment of the planetarium is used for these purposes.

The Moscow Planetarium is the largest center in the country for the popularization of nature science. An important part of the planetarium’s work is the propagandization of the materialist world view and scientific atheism, the analysis and generalization of methods for popularizing natural science, and the creation of unique demonstration devices. Many planétariums have “astronomical areas” equipped with telescopes and other devices for demonstrating various astronomical, physical, and geophysical phenomena. Astronomical clubs are connected with many planétariums; in these clubs schoolchildren learn how to use telescopes and to analyze observations and calculations.

Large planétariums exist in many foreign countries: 26 in North America, seven in South America, 19 in Europe (not counting the USSR), ten in Asia, two in Africa, and one in Australia.

[‚plan·ə′ter·ē·əm]
(astronomy)
A projection device which accurately portrays the position of the stars and planets at any time in the past, present, or future from any point on the earth or the near region of space; the modern planetarium instrument is a mechanical-electrical analog of space.
The name given to the building and gear associated with this device.
McGraw-Hill Dictionary of Scientific & Technical Terms, 6E, Copyright © 2003 by The McGraw-Hill Companies, Inc.

1. an instrument for simulating the apparent motions of the sun, moon, and planets against a background of stars by projecting images of these bodies onto the inside of a domed ceiling
2. a building in which such an instrument is housed
3. a model of the solar system, sometimes mechanized to show the relative motions of the planets
Collins Discovery Encyclopedia, 1st edition © HarperCollins Publishers 2005

Feedback
Flashcards & Bookmarks ?
Please log in or register to use Flashcards and Bookmarks. You can also log in with
Flashcards ?
My bookmarks ?
+ Add current page to bookmarks
Mentioned in ?
References in periodicals archive ?
"The planetarium is such a unique resource and we still get a lot of requests from the public to see it.
College planetarium to reopen
"So a group of us got together and, with the backing of senior management, we are bringing the planetarium back to life so that visitors can sit back, relax and enjoy a journey through space."
Much-loved planetarium to re-open after 10 years; Space: Facility to play host to new series of events following high demand
SMO's Kirkpatrick Planetarium's equipment was upgraded in 2018 with a new digital system.
Bill Nye, Planetary Society coming to Science Museum Oklahoma
Tickets cost PS15 per adult and PS12 per child with the cost of your planetarium show included in your ticket.
New planetarium show
For details, please call the National Planetarium at (02) 5277889, Monday-Friday, 8 am-12 noon, 1-5 pm.
National Planetarium offers free shows for women, transgender women
National Planetarium (MANILENNIALS / MANILA BULLETIN)
National Planetarium opens to women in celebration of International Women's Day
"In our old planetarium, we could only fit up to 25 adults sitting on the floor," he said.
Accessible universe
The planetarium project comes as the potential of stargazing and dark skies denied to urban dwellers - around 85% of the UK population has never seen a truly dark sky or experienced a clear night filled with billions of stars - was outlined at an event in Redesdale.
Sky's the limit as Kielder planetarium project is approved
The domed planetarium is set down into the landscape so that distant views to the horizon are not obscured.
Attraction at Kielder is reaching for the sky
Fund-raising will now start to finance the planetarium project, which has been taken up byNewcastle-based JDDK Architects and will cost between [pounds sterling]120,000-[pounds sterling]150,000, with the aim of opening the new attraction next summer.
Sky's the limit for Kielder Observatory, with plans approved for new planetarium; New addition planned for Kielder Observatory, with dark skies of Northumberland proving to be star attraction for tourists
Katara -- the Cultural Village has inaugurated its high-tech and first-of-its-kind planetarium, the Al Thuraya Dome, on December 18, which coincided with the Qatar National Day celebrations,
Katara opens Al Thuraya Dome Planetarium
The planetarium advised the public that the repair and temporary closure of the Ethnoastronomical and Space Science gallery began Wednesday.
National Planetarium temporarily closes gallery for repair