(plan -ĕ-tair-ee)
1. of or involving a planet or the planets.
2. Short for planetary nebula.
Collins Dictionary of Astronomy © Market House Books Ltd, 2006 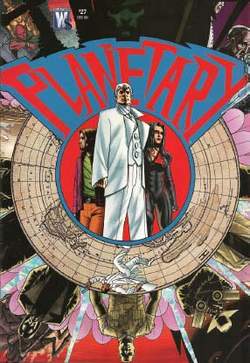 Planetary is a team of superhumans who regard themselves as “Three people who walk the world in search of strangeness and wonder, uncovering things others wish were left covered. They are the mystery archeologists, explorers of the planet’s secret history, charting the unseen borders of a fantastic world.” Their motto is “keeping the world strange”: they seek to find the fantastic beings and elements of the world and to preserve them from obscurity or destruction.

Planetary’s mission reflects the purpose that British writer Warren Ellis had in co-creating the series. He has stated that Planetary is “about the superhero subgenre, and its antecedents,” and that, “I wanted to do something that actually went deeper into the subgenre, exposed its roots and showed its branches.” Hence, the members of Planetary encounter not only counterparts of familiar figures from the superhero genre, but also characters who are analogues to classic figures from pulp fiction adventures and other genres.

The three members of the Planetary team are Elijah Snow, Jakita Wagner, and a young man known as the Drummer. Elijah Snow has the power to create intense cold. He is one of the “Century Babies,” superhumans who are immortal (if not killed by external means) and who were born at midnight on January 1, 1900. Other “Century Babies” include Jenny Sparks of the Authority; Axel “Doc” Brass, Planetary’s counterpart of Doc Savage; Lord Blackstock, Planetary’s analogue of Tarzan; and Bret Leather, a vigilante inspired by the Green Hornet, the Shadow, and the Spider. In the early twentieth century, Snow was taught by the elderly Sherlock Holmes.

Jakita Wagner is the daughter of Lord Blackstock, and possesses superhuman strength and speed, and high resistance to injury. Although born in the 1930s, she is still physically young. The Drummer has a superhuman mental ability to communicate with and manipulate computers, and indeed to “read” any source of information, whether it is technological, or a person’s DNA code, or even magic.

The principal villains of Planetary are the Four, a team of superhumans who are clearly modeled on Marvel’s Fantastic Four. In 1961, the Four made a bargain with “posthumans” from an alternate Earth. In exchange for gaining superpowers, The Four agreed to prepare their own Earth for conquest by the posthumans in 2011. Hence, the Four withheld knowledge of technological advances from Earth’s people and even killed other superhumans. The members of the Four included their leader, scientist Randall Dowling (based on Mr. Fantastic), who can “stretch” his mind to control the minds of others; Kim Suskind (based on the Invisible Woman); William Leather (based on the Human Torch); and Jacob Greene, who became a monster like the Thing.

Other Planetary characters who are inspired by classic figures from the superhero and other genres include: David Paine, a scientist who transformed into a Hulk-like monster; John Leather, alias the Dead Ranger (based on the Lone Ranger); John Stone (based on Nick Fury); Anna Hark (based on Fu Manchu’s daughter Fah Lo Suee); and Jack Carter (based on Hellblazer’s John Constantine).

Created by Ellis and American artist John Cassaday, Planetary first appeared in a preview story that was published in Gen 13 #33 and C-23 #6 (both September 1998). The series moved into its own comic book with Planetary #1 (April 1999) and was meant to appear bimonthly. However, since Ellis fell ill and Cassaday was busy with other work, Planetary instead suspended publication in 2001, for two years, then resumed, and finally concluded with issue #27, in 2009. Planetary was published by WildStorm, an imprint of DC Comics, and was set in the WildStorm universe; hence, there was a crossover with another WildStorm superhero team, the Authority, in the special Planetary/The Authority: Ruling the World (August 2000). —PS

Feedback
Flashcards & Bookmarks ?
Please log in or register to use Flashcards and Bookmarks. You can also log in with
Flashcards ?
My bookmarks ?
+ Add current page to bookmarks
Mentioned in ?
References in periodicals archive ?
The idea behind the (https://www.ibtimes.com/spacecraft-will-sail-sunlight-launch-month-2797496) LightSail2 was first conceptualized by The Planetary Society's founder Carl Sagan before his death in 1996.
SpaceX Falcon Heavy To Launch Bill Nye's Experiment To Space
Porco, who will be awarded an honorary doctorate of science at the ceremony, is a planetary scientist who explores the outer solar system by studying and interpreting images and data from NASA space missions, according to Monmouth.
Planetary scientist named Monmouth's 2019 commencement speaker
ROSS Double Planetary Mixers consist of two identical blades that move in a planetary motion, rotating on their own axes as they orbit a common axis.
Ross Debuts 150-gallon Double Planetary Mixers
In addition, the article stated that the Wellcome Trust has never funded or joined the Planetary Health Alliance.
Erratum: "Down to Earth: The Emerging Field of Planetary Health"
Containing only three stars brighter than 3rd magnitude and having no Messier objects within its borders, Aquila may be unfamiliar to some observers, but not to admirers of planetary nebulae.
Aquila's Gems: Planetary nebulae capture everybody's imagination, and the celestial Eagle offers a plethora of these gems
Key statement: Method of devulcanizing rubber and/or elastomers without the need for a chemical agent, in which method the vulcanized rubber and/or elastomers are fed into a planetary roller extruder, which planetary roller extruder has a housing, a central spindle and at least one group of planetary spindles.
Non-chemical, mechanical procedure for the devulcanization of scrap rubber and/or elastomers and apparatus therefor
A team of international astronomers predicts it will turn into a massive ring of luminous, interstellar gas and dust, known as a planetary nebula.
What Will Happen When Our Sun Dies?
Solar Planetary Systems: Stardust to Terrestrial and Extraterrestrial Planetary Sciences
Solar Planetary Systems: Stardust to Terrestrial and Extraterrestrial Planetary Sciences
LA MoonWalk will take place from 7pm to 10pm at the Pasadena Civic Auditorium and will be in benefit of The Planetary Society and FreeArts.org.
Celestron Hosts First Ever "La Moonwalk" Charity Art Show and Full Moon Star Party Benefitting the Planetary Society and Freearts.org
When Biospheres Collide: A History of NASA's Planetary Protection Program, NASA SP-2011-4234, by Michael Meltzer.
When Biospheres Collide: A History of NASA's Planetary Protection Program
In doing so, they cast off their outer layers of dust and gas into space, creating a kaleidoscope of intricate patterns known as planetary nebulas.
ESA's Herschel detects molecule vital for creating water in dying Sun-like stars
The planetary gear train, having advantages of large transmission ratio, simple construction, compactness, and smooth running, has been widely applied in many machines.
Analysis of dynamic behavior of multiple-stage planetary gear train used in wind driven generator