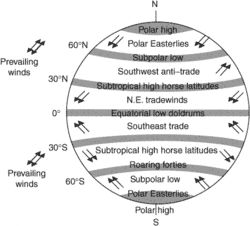 Feedback
Flashcards & Bookmarks ?
Please log in or register to use Flashcards and Bookmarks. You can also log in with
Flashcards ?
My bookmarks ?
+ Add current page to bookmarks
TheFreeDictionary presents:
Write what you mean clearly and correctly.
Mentioned in ?
References in periodicals archive ?
Large temperature differences between the south pole and adjacent regions may stir up gases and generate 2,000-kilometer-per-hour winds, the strongest planetary winds in the solar system.
Neptune's balmy south pole
Benign planetary winds of change are blowing, you need to do some serious thinking to move ahead and achieve your potential.
Psychic Sandra: SUN READY TO SHINE ON AQUARIANS; Time to be creative