A biochemical process whereby specific substrates are oxidized with a subsequent release of carbon dioxide, CO2. There is usually conservation of energy accompanying the oxidation which is coupled to the synthesis of energy-rich compounds, such as adenosine triphosphate (ATP), whose free energy is then used to drive otherwise unfavorable reactions that are essential for physiological processes such as growth. Respiration is carried out by specific proteins, called enzymes, and it is necessary for the synthesis of essential metabolites, including carbohydrates, amino acids, and fatty acids, and for the transport of minerals and other solutes between cells. Thus respiration is an essential characteristic of life itself in plants as well as in other organisms. 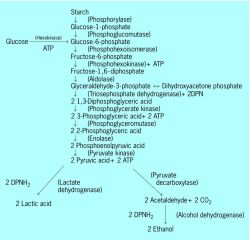 Overall aerobic respiration is the end result of a sequence of many biochemical reactions that ultimately lead to O2 uptake and CO2 evolution. In the absence of O2, as may occur in bulky plant tissues such as the potato tuber and carrot root and in submerged plants such as germinating rice seedlings, the breakdown of hexose does not go to completion. The end products are either lactic acid or ethanol, which are produced by anaerobic glycolysis or fermentation.

The sequence of reactions of anaerobic glycolysis or fermentation is shown in the illustration. The enzymes associated with anerobic glycolysis have been isolated from many plant tissues, but more often ethanol and not lactic acid is the final product.

In aerobic tissues, pyruvic acid produced during glycolysis is completely oxidized with the accompanying synthesis of much more ATP than in anaerobic glycolysis. Pyruvic acid oxidation takes place in the mitochondria by means of a cyclic sequence of reactions, the Krebs cycle (also known as the citric acid cycle) which begins when the first product of pyruvate oxidation, acetyl coenzyme A, reacts with oxaloacetic acid to produce citric acid. Oxaloacetic acid is eventually regenerated. Thus the cycle can be repeated. In terms of conservation of chemical energy, the Krebs cycle is about 12 times more efficient than anaerobic glycolysis per mole of glucose oxidized. See Citric acid cycle

In addition to anaerobic glycolysis and the Krebs cycle, there are two other sequences of biochemical reactions related to respiration that are important in plant tissues: (1) The pentose phosphate pathway permits an alternate mechanism for converting hexose phosphate to pyruvate, and (2) in germinating fatty seeds the reactions of the Krebs cycle are modified so that acetyl coenzyme A is converted to succinic acid and then to hexose by a pathway called the glyoxylate cycle. See Photorespiration, Photosynthesis, Plant growth, Plant metabolism

Feedback
Flashcards & Bookmarks ?
Please log in or register to use Flashcards and Bookmarks. You can also log in with
Flashcards ?
My bookmarks ?
+ Add current page to bookmarks
Mentioned in ?
References in periodicals archive ?
The model also found that social variables are far more important than geophysical like surface heat reflectivity, plant respiration etc.
Talking about energy-efficient things to friend, neighbor can alter climate outcomes
Heat damage occurs when temperatures are very high especially when the silo is not quickly filled or adequately packed, leaving excess oxygen in the silage.This allows continuation of plant respiration for extended periods resulting in more heat production than is desired.
How to tell good from bad silage
Tjoelker, "Thermal acclimation and the dynamic response of plant respiration to temperature," Trends in Plant Science, vol.
Effects of Light and Nutrition Manipulations on Thermal Respiratory Acclimation and Nocturnal Dynamics of Leaf Dark Respiration
During life, the plant body transfers carbon from the rhizome of the root to the ground, and plant respiration releases carbon into the atmosphere [14, 23].
Simulation of the Effect of Artificial Water Transfer on Carbon Stock of Phragmites australis in the Baiyangdian Wetland, China
This was largely because the increase in carbon dioxide concentration&nbsp;in the atmosphere enhanced photosynthetic activities in plants, and because plant respiration - a process that releases carbon dioxide - did not increase concomitantly.
Rise In Carbon Uptake By Plants Is Partly Offsetting Emissions
The researchers found that yearly variations in the carbon sink strongly correlated with variations in plant respiration.
Warm nights could flood the air with C[O.sub.2]
Higher respiration rates are expected to happen in hotter environments because plant respiration increases as a function of temperature (Atkin & Tjoelker, 2003).
Size matters: understanding the conflict faced by large flowers in Mediterranean environments
It also causes indirect damage by its excretion, which favors the development of sooty mold (Capnodium sp.) that completely coats the leaf, resulting in reduction of photosynthesis and impairing plant respiration (Oliveira et al., 2001).
First report of citrus blackfly (Hemiptera: Aleyrodidae) in the state of Piaui, Brazil
Normally, plant respiration process involves in using of atmospheric oxygen, carbohydrates, organic acids and the consequent production of metabolic energy, heat, carbon dioxide and moisture vapour.
Physiological changes of longkong fruit during different storage conditions
The Functional Organization and Control of Plant Respiration. Critical Reviews in Plant Sciences, Apopka, v.
Gas exchanges in Annonaceae species under different crop protections/Trocas gasosas em especies de Annonaceae em diferentes protecoes ambientais
To respond to the stress of excessive heat, the plant respiration system uses up a lot its carbohydrates--or fuel--it needs later on, especially for a grain fill, Walker added.
Rain, cold cause crop plantings to lag far behind: the ground Mississippi farmers plant has 52 percent more moisture than it needs