[ri′per]
(engineering)
To restore that which is unserviceable to a serviceable condition by replacement of parts, components, or assemblies.
McGraw-Hill Dictionary of Scientific & Technical Terms, 6E, Copyright © 2003 by The McGraw-Hill Companies, Inc.

Any labor or material provided to restore, reconstruct, or renew any existing part of a building, its fixtures, or appurtenances; also, to bring to a sound condition after damage or injury in a fire.
Illustrated Dictionary of Architecture Copyright © 2012, 2002, 1998 by The McGraw-Hill Companies, Inc. All rights reserved
The following article is from The Great Soviet Encyclopedia (1979). It might be outdated or ideologically biased.

(also reparation), in genetics, the special cellular function by which a cell restores molecules of deoxyribonucleic acid (DNA) that have chemical injuries or breaks; these injuries or breaks may be caused by the action of various physical and chemical agents, or they may occur during vital cellular activities in the normal biosynthesis of DNA.

Repair was first studied by A. Kelner (USA), who in 1948 discovered the photoreactivation phenomenon—the decrease in the injury to living organisms caused by ultraviolet (UV) rays when the organisms are subsequently exposed to bright visible light (light repair). R. Setlow and C. Rupert (USA) were among those who soon discovered that photoreactivation is a photochemical process involving a specific enzyme and resulting in the splitting of the thymine dimers formed in DNA upon the absorption of UV quanta. Subsequent research on the genetic control of bacterial sensitivity to UV light and ionizing radiation led to the discovery of dark repair, by which a cell reverses injuries to its DNA without the participation of visible light. The mechanism of the dark repair of bacterial cells irradiated by UV light was predicted by P. Howard-Flanders and experimentally confirmed in 1964 by P. Hanawalt and D. Pettijohn (USA). It was demonstrated that in irradiated bacteria injured parts of DNA having altered nucleotides are replaced by the resynthesized parts.

Repair systems exist in microorganisms and in animal and human cells, in which they are studied in tissue culture. In man, xeroderma pigmentosum is a hereditary disease characterized by the impairment of the repair process. Each repair system includes the following components: an enzyme that recognizes the chemically changed part of a DNA chain and breaks the chain near the injury, an enzyme that removes the injured part, an enzyme (DNA polymerase) that synthesizes the corresponding part of the DNA chain instead of the part removed, and an enzyme (ligase) that links together the last bond in the polymer chain, thereby restoring the integrity of the DNA.

Bacteria have at least two enzyme systems that control repair. The first enzyme system is responsible for removal and resynthesis in a small area containing five to seven nucleotides, while the second controls removal and resynthesis in an area containing 1,000 or more nucleotides. Enzymes of the second system also participate in genetic recombination. In injuries caused, for example, by UV light, a normal colon bacillus cell can repair as many as 2,000 injuries. A cell with its first repair system disabled can repair about 100 injuries, while a cell with both repair systems disabled dies from a single injury. There are bacteria with exceptionally active repair enzymes, for example, Micrococcus radiodurans, which enable the bacteria to survive in water used to cool nuclear reactors.

It is believed that enzyme repair systems take part in normal DNA replication, that is, in the duplication of DNA. The mother DNA despiralizes, or unwinds, during replication, and its strands may become broken. Moreover, daughter DNA chains are synthesized in the form of small fragments. Therefore, the concluding phase of replication is the repair of all the defects that have occurred during DNA synthesis.

An important function of the second repair system is participation in the creation of mutations. A variety of mutagens induce derivatives of nucleotides foreign to the cell to be formed in DNA. These derivatives are removed by a repair system, which replaces them with nucleotides natural to DNA but sometimes differing from the original nucleotides. The discovery of the repair of DNA has led to radical changes in concepts concerning the molecular mechanisms that both assure the stability of the cellular genetic apparatus and control the rate of mutation.

Repair in radiobiology. Repair in radiobiology is concerned with the recovery of living organisms from injuries caused by ionizing radiation. Repair is accomplished by specific enzymes and varies with the genetic characteristics and physiological conditions of irradiated cells and organisms. The study of genetic control and the molecular mechanisms of repair in cells injured by UV rays and ionizing radiation has resulted in the discovery of genetic repair.

In unicellular organisms and plant and animal cells, repair increases the survival rate and reduces the number of chromosome 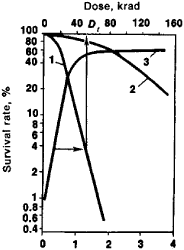 aberrations and gene mutations. Repair is promoted both by the temporary inhibition of the first cell division after irradiation, by some conditions of cell cultivation, and by irradiation administered in fractions. For example, when yeast cells irradiated by gamma rays, alpha particles, or neutrons are maintained in a medium lacking nutrients, their viability increases by a factor of 10 or a factor of 100 as a result of repair. The increase in viability corresponds to a decrease in the relative biological effectiveness of the dose by a factor of four or five (Figure 1). The number of injured chromosomes in irradiated plant cells may decrease as a result of repair by a factor of five to ten.

In multicellular organisms, repair is manifested by the regeneration of organs and tissues injured by irradiation owing to the multiplication of cells that have retained their capacity to divide. In mammals and man, the stem cells of bone marrow, lymphoid organs, and small-intestine mucosa are most important in repair. Irradiation administered in fractions is ordinarily used to study repair in mammals; because of repair, the total effect of two doses of irradiation is less when the interval between them is longer (Figure 2). Figure 2. Recovery of plant cells from radiation injuries that cause chromosome aberrations. The curves show the dependence of the number, in percent, of injured chromosomes on the time, in hours, between the irradiation and division of the cells of irradiated (1) bean sprouts, (2) pea sprouts, and (3) tradescantia microspores.

Repair can be stimulated by introducing a small quantity of nonirradiated bone-marrow cells into an organism; the same procedure is effective in the treatment of radiation sickness. Cells and organisms with impaired repair processes exhibit an increased radiosensitivity.

(maintenance), the aggregate of technical-economic and organizational procedures involved in maintaining and partially or fully restoring the use value of fixed capital stock (means of production) or items of personal use. The term “repair” is also used to refer to the replacement of malfunctioning parts, the elimination of defects, and the fixing of components.

Equipment is repaired to restore its operational condition or to return it to working order. A distinction is made between routine, medium, and major repair, depending on design characteristics, the nature of the damage to the equipment or the degree to which particular parts of the equipment are worn, and the labor intensiveness of repair jobs. In routine repair, minor damage is eliminated by replacing or restoring parts and assemblies, and various adjustments are made. Routine repair is done by the personnel who operate the equipment or by repair brigades at the place of operation, often during safety inspections. In medium repair, the equipment is partially dismantled, the technical condition of assemblies is checked, defects are eliminated, and sometimes major repair work is done on particular parts. Medium repair is done by mobile or permanent repair services. Major repair is the most complete and labor-intensive type of repair work and is done by repair enterprises in their own stationary facilities. In major repair, equipment is completely dismantled, parts are checked, and damage is repaired or parts are replaced. The equipment is then reassembled, comprehensively tested, adjusted, and put through trial runs.

Goods for personal use are repaired primarily by consumer-service enterprises and the charge is paid for by the customer.

Replacement or renewal (excluding additions) of any part of a building, structure, device, or equipment with like or similar materials or parts, for the purpose of maintenance of such building, structure, device, or equipment.
McGraw-Hill Dictionary of Architecture and Construction. Copyright © 2003 by McGraw-Hill Companies, Inc.