Plowing on | Article about plowing on by The Free Dictionary
https://encyclopedia2.thefreedictionary.com/plowing+on
Printer Friendly

(redirected from plowing on)
Also found in: Dictionary, Thesaurus, Idioms.

see plowplow
or plough,
agricultural implement used to cut furrows in and turn up the soil, preparing it for planting. The plow is generally considered the most important tillage tool.
..... Click the link for more information. .
The Columbia Electronic Encyclopedia™ Copyright © 2013, Columbia University Press. Licensed from Columbia University Press. All rights reserved. www.cc.columbia.edu/cu/cup/

(US Big Dipper) A group of stars in Ursa Major that contains the seven brightest stars in that constellation, nearly all with similar apparent magnitudes (mv ), and has a very distinctive shape (see illustration). The seven stars are Alioth, Dubhe, Alcaid, Mizar, Merak (mv : 2.36), Phecda (mv : 2.43), and Megrez (mv : 3.31), in order of brightness. Alcaid and Dubhe have different values and directions of proper motion than the other five so that the shape of the Plough is slowly but continuously changing.
Collins Dictionary of Astronomy © Market House Books Ltd, 2006

[plau̇]
(engineering)
A groove cut lengthwise with the grain in a piece of wood.
(mining engineering)
A continuous mining machine in which cutting blades, moved over the face being worked, bite into the coal as they are pulled along and discharge it on an accompanying conveyor.
A V-shaped scraper that presses against the return belt of a conveyor, removing coal and debris from it.
McGraw-Hill Dictionary of Scientific & Technical Terms, 6E, Copyright © 2003 by The McGraw-Hill Companies, Inc. 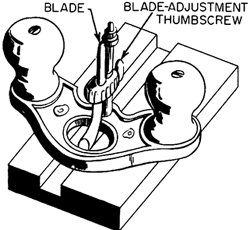 router plane
A plane used for cutting and smoothing grooves which have their bottoms parallel to the surface; has a handle at each end and a centrally located cutting tool.
McGraw-Hill Dictionary of Architecture and Construction. Copyright © 2003 by McGraw-Hill Companies, Inc.

the. the group of the seven brightest stars in the constellation Ursa Major
Collins Discovery Encyclopedia, 1st edition © HarperCollins Publishers 2005