woody vines and trailing or erect shrubs of the family Anacardiaceae (sumacsumac
or sumach
, common name for some members of the Anacardiaceae, a family of trees and shrubs native chiefly to the tropics but ranging into north temperate regions and characterized by resinous, often acrid, sap.
..... Click the link for more information.  family), native to North America. They are sometimes considered as several species of Rhus, the sumac genus, but are usually distinguished as Toxicodendron radicans (poison ivy and poison oak) and the larger T. vernix (poison sumac). The whitish berrylike fruits often persist through winter. The leaves of T. radicans are composed of three smooth leaflets. Both species have vivid red autumn foliage. Poison oak is a name generally used in the South and West for the bushy kinds.

The irritant principle, urushiol, is present in almost all parts of the plant. Direct or indirect contact (clothing, tools, or animals that have touched the plant, or smoke from burning the plants) sets off a skin eruption that may vary from simple itching inflammation to watery blisters, depending upon the sensitivity of the individual. The eruption appears within a day to two weeks depending upon sensitivity. It begins on the portion of the body that has come in contact with the plant, usually the hands, which then can spread it to the face and other areas. Washing contaminated skin as soon as possible after contact can reduce the severity of symptoms. These plants are classified in the division MagnoliophytaMagnoliophyta
, division of the plant kingdom consisting of those organisms commonly called the flowering plants, or angiosperms. The angiosperms have leaves, stems, and roots, and vascular, or conducting, tissue (xylem and phloem).
..... Click the link for more information. , class Magnoliopsida, order Sapindales, family Anacardiaceae. 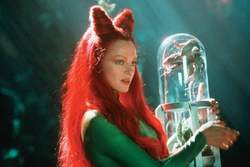 (pop culture)
The botanical beauty Poison Ivy has a habit of getting into the Masked Manhunter's blood. A curvaceous, auburn-haired knockout dressed in a foliage-motif bathing suit with tights—picture a pinup girl attired by the Jolly Green Giant's tailor—she struts into Batman #181 (1966), stealing the limelight from Dragon Fly, Silken Spider, and Tiger Moth, three costumed femme fatales “starring” in a Gotham City pop-art exhibit. Soon Poison Ivy is stealing jewelry, aided by non-descript henchmen, and Batman's price for trying to stop her is … a kiss. Ivy's lipstick contains a “chloroform base” that makes the Caped Crusader open to her suggestion, and the hero is at her beck and call (“You can't resist me—once you've had a touch of Poison Ivy!”), aiding her in her crime wave, to Robin the Boy Wonder's dismay. In this tale's conclusion (two issues later in Batman #183), the Gotham Guardian shakes off the effects of Poison Ivy's toxin and prunes the career of the “contagious villainess.” Readers were not as smitten with Poison Ivy as was Batman, and the character withered away after her two-part debut—there was only room for one Batman bad girl in the boy-dominated comic-book market of the 1960s, and Catwoman had filled that slot since 1940. Poison Ivy's creator, writer Robert Kanigher (Sheldon Moldoff and Joe Giella drew Ivy's original two-part adventure), tried again to cultivate interest in the villainess by featuring Ivy in a 1977 “Rose and the Thorn” short story, to no avail. From the 1970s through the late 1980s Poison Ivy occasionally sprung up but failed to take root, and when seen she was usually in the company of other costumed criminals (the Injustice Gang, the Secret Society of Super-Villains, and the Suicide Squad). Through these stories buds of information sprouted, like her real name (Pamela Isley) and her pre-criminal past (a botanist gone bad because of a treacherous boyfriend). Writer Neil Gaiman, in the threeissue Black Orchid miniseries (1988–1989) painted by Dave McKean, then planted the seeds that allowed Poison Ivy to thrive: Poison Ivy was originally Pamela Lillian Isley, an unattractive, acquiescent (yes, a shrinking violet) botanist. Her mentor, Dr. Jason Woodrue—who would one day become one of the Atom's archfoes, the Floronic Man—made her the subject of flora/fauna hybridization experiment by injecting plant toxins into her bloodstream. Blossoming into a virtual Venus with pale green skin, Isley gained immunity to natural poisons, from bacteria to fungi, and the control over plant life (varying texts have ascribed this power to telepathy, others to the seed pods she dispensed). Able to secrete pheromones through her skin in order to drive men wild, Poison Ivy often exerts this control via a kiss, just as Kanigher imagined back in 1966. Early in her career Poison Ivy relocated from the lush Pacific Northwest to the tenebrous Gotham City, where she poisoned the city's wealthiest citizens with toxic plant spores, extorting millions before relinquishing an antidote (Shadow of the Bat Annual #5, 1995)—a caper snipped by Batman in their first kiss-and-kick battle. She often resorts to eco-terrorism to protect the green, funding her efforts by stealing. Ivy has germinated different areas of Gotham into jungles. A noted example occurred during the 1999 multi-part Batman serial “No Man's Land,” in which she remade Robinson Park (named after legendary Batman artist Jerry Robinson) into a modern-day Eden where, showing rare compassion for humans, she cared for children orphaned by an earthquake that crippled the city. Ivy's other soft spot is Harley Quinn, the Joker's sometime-lover/sometime-sidekick, with whom she has become friends and occasional partners in crime. Their relationship originated on television, in Batman: The Animated Series (1992–1995), and later pollinated comics. In “Harley and Ivy” and other episodes of Batman, Poison Ivy was a softer, more seductive character, blueprinted by artist Lynne Naylor. Series co-creator Bruce Timm redesigned the animated Ivy, paling her skin and neutering her voluptuousness, when the series was revamped into The Adventures of Batman & Robin (1997–1999). Diane Pershing voiced the character on both series, as well as Poison Ivy's guest appearances in Static Shock (2000–2004) and Justice League (2001–2004). Poison Ivy and Harley Quinn have co-starred in DC Comics miniseries in both the “animated” and traditional styles. Poison Ivy's origin was modified, connecting Pamela Isley with future Batgirl Barbara Gordon, in the WB's reinvention of the Batman cartoon, The Batman (2004–present); Piera Coppola provided her voice. The supervillainess' other media appearance, director Joel Schumacher's Batman & Robin (1997), cast Uma Thurman in the role (Demi Moore and Julia Roberts were considered), teaming her with Arnold Schwarzenegger as Mr. Freeze. The movie Poison Ivy borrowed heavily from the comic-book mythos (Jason Woodrue even appeared), but Thurman's campy-vampy, Mae West–inspired portrayal was one of several over-the- top performances in the movie critically lambasted by Bat-buffs. Her occasional protection of children aside, Poison Ivy's comic-book persona leaves no margin for frivolity. At times she has used a vine whip and a crossbow, but her pheromonal control remains her most potent weapon—even the mighty Superman succumbed to her charms in the best-selling 2003 Batman storyline “Hush,” by writer Jeph Loeb and artist Jim Lee. She apparently perished in that serial, but by the mid-2000s had bloomed once again. Beginning with Batman: The Animated Series tie-ins in the 1990s, Poison Ivy has been produced as action figures and dolls, and in other merchandise. For the discerning collector, superstar artist Adam Hughes designed and John G. Mathews sculpted an exquisite Poison Ivy “Women of the DC Universe” coldcast porcelain bust, a 2006 release from DC Direct.
The Supervillain Book: The Evil Side of Comics and Hollywood © 2006 Visible Ink Press®. All rights reserved.

any of several North American anacardiaceous shrubs or vines of the genus Rhus (or Toxicodendron), esp R. radicans, which has small green flowers and whitish berries that cause an itching rash on contact
Collins Discovery Encyclopedia, 1st edition © HarperCollins Publishers 2005

Feedback
Flashcards & Bookmarks ?
Please log in or register to use Flashcards and Bookmarks. You can also log in with
Flashcards ?
My bookmarks ?
+ Add current page to bookmarks
Mentioned in ?
References in periodicals archive ?
* The edges of poison ivy leaves are never saw-toothed or scalloped.
Hey, is that poison ivy? Plants
While network clinicians felt that studying poison ivy was of interest and importance, and we had preliminary survey information to suggest it was a common problem treated in primary care, our data suggest that clinical encounters for poison ivy are actually quite uncommon (less than 0.4% of all encounters) even during peak months.
Poison ivy: how effective are available treatments?
Give me a quick remedy if I find myself with a poison ivy reaction.
Poison ivy remover: Helaine Hughes
Turning our fears inside out, Sanchez skillfully convinces us that poison ivy is a beneficial plant, worthy of our admiration and respect.
Leaflets three, let it be: the story of poison ivy
Poison ivy can also sprawl across the ground or tumble over sand dunes like a ground cover.
Ditch the itch: learn what you need to know to avoid the undesirable poison ivy rash, and it'll never deter you from the outdoors again
The FireEye report identifies several ongoing nation-state threat actors currently using Poison Ivy, including:
FireEye Labs Research Highlights Resurgence of Popular Remote Access Tool 'Poison Ivy'
Sandler said that he put the security camera on himself in his bed to see what he was doing but instead discovered that a housekeeper kept coming in and rubbing poison ivy all over his body while he slept.
Adam Sandler says maid rubbed poison ivy on him as he slept
Poison Ivy was partially released in September 1963 before being hastily withdrawn, an interesting anecdote but it didn''t count in this competition.
Competition
Poison ivy contains a sticky oil called urushiol (yoo-ROO-she-ol).
Ask Dr. Cory
BATMAN AND ROBIN C4,1:.5pm George Clooney donned the cape for the fourth instalment of the Batman franchise, battling supervillain Mr Freeze (Arnold Schwarzenegger) and eco-terrorist Poison Ivy (Uma Thurman).
FILMS OF THE DAY
The American Academy of Dermatology (ADD) has launched KidsSkinHealth.org, a new website to teach kids how to practice good skin care virtually, or risk the consequences of pimples, greasy hair, a poison ivy rash and sunburn.
The American Academy of Dermatology (ADD) has launched KidsSkinHealth.org
Formed by Lux and his wife Poison Ivy Rorschach in the mid-1970s, they hit their stride when they became a part of the CBGB punk scene in 1975-76.
The Cramps: Lux Interior 10/21/48-02/04/09