(1) A device for measuring the angle of rotation of the plane of polarization of monochromatic light in optically active substances. (The dispersion of optical activity is

measured with spectropolarimeters.) In polarimeters constructed on the design of half-shadow devices (Figures 1 and 2), the measurement is made by a visual matching of the brightnesses of the two half-fields of light. Readings are then taken from an angular scale fitted with a vernier. This method, despite its fundamental simplicity, has a sufficiently high accuracy for many purposes, which accounts for the wide use of half-shadow polarimeters. More widespread, however, are the automatic polarimeters with photoelectric recorders. In these, the matching of the brightnesses is accomplished by modulating the plane of polarization of the entering light and isolating the signal of the 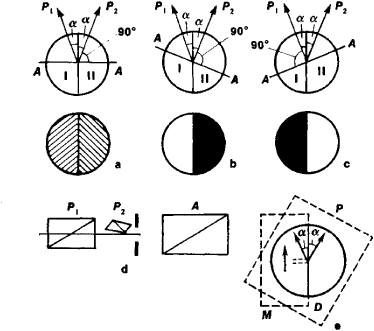 Figure 2. Half-shadow polarizers. The planes of polarization of the two half-fields P1 and P2 are separated by angle 2α. Therefore, if the plane of polarization of analyzer AA is perpendicular to the bisector of 2α, as in (a), fields of view I and II appear equally bright, that is, the fields are not completely absorbed, hence the name “half-shadow.” With the slightest turn of the analyzer, the relative brightnesses of I and II change markedly, as in (b) and (c). The Lippich half-shadow polarizer is shown in (d). Here P1 and P2 are polarizing prisms, one of which covers half the field of view; A is the analyzer. The Laurent design is shown in (e), where a half-wave plate M Is placed behind the polarizing prism P. The principal plane of M is separated from the plane of polarization of P by angle α. D is a diaphragm confining the field of view, or iris diaphragm.

Figure 3. Schemes of automatic polarimeters with photoelectric recorders, based on the modulation of the plane of polarization of the entering light: (1) source of light, (2) condenser, (3) polarizer and modulator of the plane of polarization, (4) cuvette containing sample substance, (5) analyzer, (6) light detector, (7) amplifier. (Since design [b] differs from [a] only by the magneto-optical modulator M, the component parts of [b] are not listed.) Light, modulated in intensity after passing through the analyzer, is converted into variable voltage V2 by the light detector. The voltage is then amplified to V2′ and applied to one set of coils of a two-phase reversible electric motor RM. The motor is kinematically connected both to the analyzer and a measuring device. Sinusoidal voltage V1 with frequency equal to that of the first harmonic of the modulated light, is applied to the other set of coils of the motor. This causes the motor to rotate the analyzer to an angle equal to the angle of rotation of the plane of polarization. The result obtained is not affected by changes in the intensity of the light, the amplitude of the angular oscillations of the plane of polarization of the light, or the coefficient of amplification in (7). This allows measurements of substances with high absorption and makes it unnecessary to stabilize the amplification.

fundamental frequency as it emerges from the light detector (Figure 3). Modern automatic polarimeters permit measurements of the angle of optical rotation with an accuracy of ~0.0002°.

(2) A device for determining the amount of polarization p of partially polarized light. The simplest such polarimeter is the Cornu half-shadow polarimeter, designed for measuring the amount of linear polarization. A Wollaston prism and an analyzer are its main elements. Here, the brightnesses of the fields, illuminated by beams having different intensities upon emergence from the prism, are balanced by rotating the analyzer. The rotation scale is graduated for values of p. In the simple case of measuring the amount of linear polarization, a photoelectric polarimeter consists of a light detector and an analyzer that rotates about the optical axis of the polarimeter. The ratio of the amplitude of the alternative component to that of the direct component of the detector current is a direct measure of p. By placing a quarter-wave plate in front of the polarimeter, it is possible to measure the amount of circular polarization.

Polarimeters are widely used in the study of the structure and properties of substances and in the solution of technical problems. In particular, the measurement of the amount of circular polarization in radiation from stellar sources permits the detection of strong magnetic fields in the universe.