According to all available theoretical and experimental evidence, it is the electric vector rather than the magnetic vector of a light wave that is responsible for all the effects of polarization and other observed phenomena associated with light. Therefore, the electric vector of a light wave, for all practical purposes, can be identified as the light vector. See Crystal optics, Electromagnetic radiation, Light, Polarization of waves

Certain natural materials absorb linearly polarized light of one vibration direction much more strongly than light vibrating at right angles. Such materials are termed dichroic. Tourmaline is one of the best-known dichroic crystals, and tourmaline plates were used as polarizers for many years. See Dichroism

Other natural materials exist in which the velocity of light depends on the vibration direction. These materials are called birefringent. One of the best-known of these birefringent crystals is transparent calcite (Iceland spar). The Nicol prism is made of two pieces of calcite cemented together (Fig. 1). The cement is Canada balsam, in which the wave velocity is intermediate between the velocity in calcite for the fast and the slow ray. The angle at which the light strikes the boundary is such that for one ray the angle of incidence is greater than the critical angle for total reflection. Thus the rhomb is transparent for only one polarization direction. See Birefringence, Optics

A different type of polarizer, made of quartz, is shown in Fig. 2. Here the vibration directions are different in the two pieces so that the two rays are deviated as they pass through the material. The incoming light beam is thus separated into two oppositely linearly polarized beams which have an angular separation between them, and it is possible to select either beam. 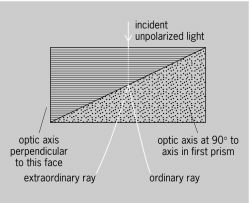 A third mechanism for obtaining polarized light is the Polaroid sheet polarizer, of which there are three types. The first is a microcrystalline polarizer in which small crystals of a dichroic material are oriented parallel to each other in a plastic medium. The second type depends for its dichroism on a property of an iodine-in-water solution. The iodine appears to form a linear high polymer. If the iodine is put on a transparent oriented sheet of material such as polyvinyl alcohol (PVA), the iodine chains apparently line themselves parallel to the PVA molecules and the resulting dyed sheet is strongly dichroic. A third type of sheet polarizer depends for its dichroism directly on the molecules of the plastic itself. This plastic consists of oriented polyvinylene.

When an unpolarized light beam is scattered by molecules or small particles, the light observed at right angles to the original beam is polarized. The best-known example of polarization by scattering is the light of the north sky. See Scattering of electromagnetic radiation

A plate of material (quartz, calcite, or other birefringent crystals) which is linearly birefringent is called a wave plate or retardation sheet. Wave plates have a pair of orthogonal axes which are designated fast and slow. Polarized light with its electric vector parallel to the fast axis travels faster than light polarized parallel to the slow axis. The thickness of the material can be chosen so that for light traversing the plate, there is a definite phase shift between the fast component and the slow component. A plate with a 90° phase shift is termed a quarter-wave plate.

Polarized light is one of the most useful tools for studying the characteristics of materials. The absorption constant and refractive index of a metal can be calculated by measuring the effect of the metal on polarized light reflected from its surface. See Reflection of electromagnetic radiation

The analysis of polarized light can be performed with a variety of different devices. If the light is linearly polarized, it can be extinguished by a linear polarizer and the direction of polarization of the light determined directly from the orientation of the polarizer. If the light is elliptically polarized, it can be analyzed with the combination of a quarter-wave plate and a linear polarizer. Any such combination of polarizer and analyzer is called a polariscope.

Feedback
Flashcards & Bookmarks ?
Please log in or register to use Flashcards and Bookmarks. You can also log in with
Flashcards ?
My bookmarks ?
+ Add current page to bookmarks
Mentioned in ?
References in periodicals archive ?
In order to show the reversibility of the deformation, we repeated the experiment with linearly polarized light. The microwells, initially showing circular shape (Figure 3(a)), turn into almost closed slits after about 220 seconds of irradiation (Figure 3(b)).
Reversible Shaping of Microwells by Polarized Light Irradiation
Polarized Light Microscopy for Imaging Living Cells
Living cells and dynamic molecules observed with the polarized light microscope: the legacy of Shinya Inoue
Knowledge that the solar corona emitted polarized light was first gained at the eclipse of 1868 [16, p.44].
Polarized light from the sun: unification of the corona and analysis of the second solar spectrum--further implications of a liquid metallic hydrogen solar model
The results on the characteristics of transverse and longitudinal components of the circularly polarized light are completely different from those of radially polarized light where the longitudinal component is localized and occupies most part of the total electric energy, and the parasitic radial component is donut-shaped.
Creation of super-resolution non-diffraction beam by modulating circularly polarized light with ternary optical element
Editors Berdyugina (astronomy, ETH Zurich), Nagendra (astrophysics, Indian Institute of Astrophysics) and Ramelli (astrophysics, Istituto Ricerche Solari Locano) compile papers that discuss such topics as the quantum theory of polarized light scattering in the presence of magnetic and electrical fields, quantum aspects of the Second Solar Spectrum and the use of Zeeman and Hanle effects to diagnose the fine structure of solar magnetic fields.
Solar polarization; proceedings
Mantis shrimp see a special type of polarized light (light waves with the same pattern of vibration), whose photons vibrate in such a way that they form a corkscrew-like pattern.
Eye-popping discovery
Application of polarized light opened up new possibilities of investigating transparent objects.
On the role of T. J. Seebeck in the discovery of the photoelastic effect in glass/T. J. Seebecki osast klaasi fotoelastsusefekti avastamisel
Biopsy identified an amyloid deposit; the specimen was positive for Congo red staining under polarized light. Immunohistochemistry confirmed a light-chain amyloidosis (AL type).
Laryngeal amyloidosis: a case of 'Adidas-stripes' larynx
Optical fiber sensors detect vibration and shocks due to rockfalls and mudslides by using polarized light. The system then remotely monitors the fluctuations on PMC equipment.
Furukawa Electric Develops PMC Optical Fiber System
The structure may be composed of pixels whose surface relief microstructure and composition determines the direction and color of zero-order diffracted light visible from each pixel when the structure is illuminated with polarized light and viewed through an analyzer that passes light of the opposite polarization.
Polarising authentication