1. a mushroom-shaped valve that is lifted from its seating against a spring by applying an axial force to its stem: commonly used as an exhaust or inlet valve in an internal-combustion engine
2. Nautical a temporary supporting brace for a vessel hauled on land or in a dry dock
Collins Discovery Encyclopedia, 1st edition © HarperCollins Publishers 2005 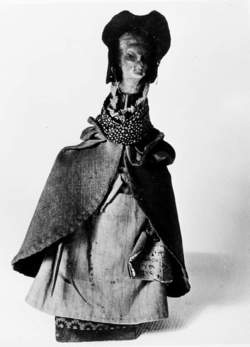 A figure made to represent a person, a poppet is used in magical ritual. Made of cloth, wax, clay, or any other substance, it may or may not look exactly like the person it represents. A simple candle representing a person—moved, melted, or stuck with pins—can effectively act as a poppet, through what is known as sympathetic magic.

Most poppets bear some resemblance to a living person. Cloth poppets have always been popular in magic, especially for healing purposes. Two pieces of cloth are cut out in a crude "gingerbread man" form and sewn together with an opening left at the top. The figure is then stuffed with herbs, or other paraphernalia suitable for the intended ritual, and the top is closed. For healing, the figure might be stuffed with healing herbs, feathers, or stones. A lock of hair, nail parings, a piece of clothing, or even a photograph of the person seeking the cure may be incorporated into the stuffing of the poppet to make it more personal. The cloth may be decorated with embroidery, paint, or ink to add facial features that resemble its living counterpart. The poppet is then consecrated and named after that person. The practitioner utters words to the effect that, "All that I do to this figure, I do to (Name)."

If the intent is to harm, the figure may be stuck with pins—in the head to bring about a headache, in the heart to bring about death; if the figure is of wax, it may be melted over a candle flame or fire. As early as 1100 BCE, a treasury official and the women of the harem of Pharaoh Ramses III worked together to make a wax image of the Pharaoh to bring about his death.

At the Salem Witch Trials, two men presented evidence against Bridget Bishop, testifying that "being employed by Bridget Bishop, alias Oliver, of Salem to help take down the cellar wall of the old house she formerly lived in, we the said depondents, in holes in the old wall belonging to the said cellar, found several puppets made up of rags and hogs' bristles with headless pins in them with the points outward." This proved to be damning evidence.

Poppets figured in many witchcraft cases over the centuries. In 1590, when the witches of North Berwick were working against King James VI of Scotland, in 1590, they made a wax image that was melted in front of a fire. In 1594, when the fifth Earl of Derby died suddenly, a wax image was found in his bedroom. In 1664 the Wincanton coven of Somerset, England, presented their Chief with wax poppets to have him consecrate them. Ann Bishop, of that group, asked that her poppet be named for John Newman. She then thrust thorns into it. In 1678 the Paisley witch coven used a poppet to try to kill a man. According to one of the male members of the group, "the Devil required every one of their consents for the making of the Effigies of Clay, for the taking away the life of Sir George Maxwell."

George Kittredge tells of Caroline of Brunswick, Princess of Wales: Locked in a loveless marriage with the future King George IV, she often made wax images of her husband. In the presence of close friends, she delighted in sticking these figures with pins and melting them in front of the fire. In 1916, a woman in West Sussex showed her local vicar a crude image cut out of a turnip. Two pins were stuck into its chest. The woman claimed that her husband had made the figure in her likeness, and that she had subsequently developed burning pains in her chest.

Although the majority of past cases involving poppets have involved negative intent—such as harming or killing the intended victim—today's Wiccans employ only positive magic, using poppets to heal.

[′päp·ət]
(civil engineering)
One of the timber and steel structures supporting the fore and aft ends of a ship for launching from sliding ways.
(design engineering)
A spring-loaded ball engaging a notch; a ball latch.
(mining engineering)
A pulley frame or the headgear over a mine shaft.
McGraw-Hill Dictionary of Scientific & Technical Terms, 6E, Copyright © 2003 by The McGraw-Hill Companies, Inc.

Feedback
Flashcards & Bookmarks ?
Please log in or register to use Flashcards and Bookmarks. You can also log in with
Flashcards ?
My bookmarks ?
+ Add current page to bookmarks
Mentioned in ?
References in periodicals archive ?
Automotive positive crankcase ventilation valves--small, simple devices, with only one moving poppet and a spring--must meet rigorous performance specifications.
Custom tester speeds design, production: PC-driven test equipment cuts PCV valve production in half
With a documentary film crew and Mr Snoodle in tow, Katsuma, Poppet and the gang begin their epic quest, unaware of the dangers that await them.
MOSHI MONSTERS: THE MOVIE
Frank Taylor, the father of the future Hollywood star Elizabeth, lived in the Hampstead house after John, and the family inherited the portrait of Poppet.
Abandoned by its painter and owned by Elizabeth Taylor... now John's portrait of Poppet is up for auction; TENBY ARTIST'S PAINTING OF DAUGHTER COULD FETCH $92K
Conversely, Glenmuir probably needs further, while Smalljohn is more at home at Wolverhampton, although, crucially, he should be responsible for giving Poppet's Lovein a lead.
Poppet's Lovein can show Bullet traits to hit target; ON TUESDAY
I haven't been able to bring myself to tell her about Poppet yet.
Pets killed in stable attack
The main poppet is held on its seat by the force exerted by hydraulic pressure fluid acting on differential areas, A and a.
Flow and pressure controls. (Hydraulic Systems Trends)
The leakage space created by the dual butterfly flaps vents to atmosphere via two poppet valves, which are actuated at time of closure by striker arms on the flap linkage.
Hygienic valves and sightglasses from Sudmo
Coke and sludge made the operation of the relief valve sluggish and sometimes the poppet spool would get stuck.
Filtration improves efficiency of heat transfer systems and triples life of pumps
Four basic valve types were chosen for evaluation: front-discharge and side-discharge ball check valves; low-flow, medium-flow, and high-flow ring check valves, including three-piece and four-piece designs; a poppet check valve; and a premium-priced proprietary poppet-valve design.
Match your check valve to your screw design