1.
a. a personal communication or petition addressed to a deity, esp in the form of supplication, adoration, praise, contrition, or thanksgiving
b. any other form of spiritual communion with a deity
2. a similar personal communication that does not involve adoration, addressed to beings venerated as being closely associated with a deity, such as angels or saints
3. a form of devotion, either public or private, spent mainly or wholly praying
4. a form of words used in praying
5. Law a request contained in a petition to a court for the relief sought by the petitioner
Collins Discovery Encyclopedia, 1st edition © HarperCollins Publishers 2005 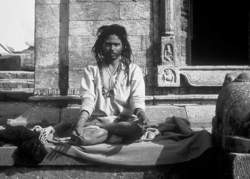 Prayer can take many shapes according to different religions, but it is the primary means of expressing faith and asking for gifts or graces from God. Fortean Picture Library.

These terms are used almost interchangeably, but there is a difference that must be understood when studying various religions with differing ways of approaching spirituality.

Prayer is directed toward a deity. A person prays to a particular god, goddess, or spiritual entity with the understanding that the entity is listening.

Meditation is "thinking about." Usually a particular idea or phrase, icon, or idol attracts the attention and involves the participant, who is seeking spiritual enlightenment or understanding.

Contemplation is a more open-ended meditation. The person contemplating doesn't try to understand as much as to experience.

A recent six-year study conducted at Duke University has come to the conclusion that prayer is good for one's health. Dr. Harold Koenig, directory of the University's Center for the Study of Religion/Spirituality and Health, reviewed the cases of some four thousand participants from various faith traditions and found that the relative risk of dying for those who frequently prayed was 46 percent lower than for those who didn't. Additionally, people over the age of sixty-four who prayed regularly had significantly lower blood pressure, survived heart surgery more often, and recovered more quickly from depression, alcoholism, hip surgery, drug addiction, stroke, rheumatoid arthritis, and bypass surgery.

No one knows why. Studies of this kind obviously cannot be used to "prove" divine intervention. The results could be psychosomatic. But they are undeniable.

A petition to the gods. Originally spontaneous supplications, they developed into set formulae in most established religions, with emphasis on correct wording and phraseology. In Wicca, the "words from the heart" method is still preferred.

Alfred Métraux, speaking of the Incas, says traditional prayers were couched in a solemn and grandiose style reminiscent of that of the psalms; the Chaco tribes of the Amazon, however, generally posited requests to their sun god Apinayé as short sentences merely stating a desire.

Prayers may vary from begging to demanding and even threatening. They may be delivered standing, kneeling, bowing, or prostrate, with head covered or uncovered, depending on the religious prescription. Maria Leach argues that, when rigidly prescribed, prayer becomes a form of magic.

Many times prayer is accompanied by sacrifice, to show the petitioner's willingness to pay the deity for answering the request. In Voodoo there is invariably a sacrifice involved, be it a chicken, goat, or young bull. In Roman Catholicism the prayer is frequently accompanied by the burning of a candle. In Witchcraft there are no sacrifices, prayers being simple requests to the deities.

Rosemary Guiley points out that in Christianity, prayer was encouraged in order to supplant Pagan charms and spells. "A nine-day regimen of holy bread and water accompanied by the recitation of three Paternosters and three Aves in honor of the Trinity and St. Herbert would protect against all disease, witchcraft, mad dogs and Satan."

Métraux, Alfred: The History of the Incas. Praeger, 1965.

Prayer has been defined as the act of addressing deity in petition, or a specific order of words used in praying. Bletzer said it is “a continuous string of words either spoken or silent, shouted or sung, that sends power into the ethers in accordance with the emotion and faith behind the words.”

Prayer is usually addressed to deity, asking for help, guidance, or the granting of a desire, or expressing devotion, giving thanks, or asking forgiveness. Prayers are frequently rendered in a set formula, though it would seem that words coming straight from the heart would be most appropriate and most effective. They may be delivered standing, kneeling, or even prostrate, depending upon tradition.

Historically there have been many different approaches to prayer, from the pleading to the threatening. It was said that the ancient Egyptians had a bullying manner toward their gods. In Morocco, there are many instances of ‘dr the “conditional curse” applied to saints to make them attend to requests if they seem at all reluctant. In Africa, the Zulus will say to the ancestral spirit, “Help me or you will feed on nettles.”

Silent prayers probably came about from the use of “words of power” used magically. Rather than reveal these supposedly powerful words used to command the gods or the spirits, the magicians would mumble them or say them silently so that others could not overhear and also use them. At a later stage, when there was more of a distinction between magic and religion, it became common to repeat prayers loudly if only to show that no magical words were being included. Yet prayer seems to have gone full cycle with modern thought that to pray silently is to show communion and silent adoration, bringing a person closer to deity.

In Modern Spiritualism, the belief is not focused on a distinctly male anthropomorphic deity. There is an acknowledgement of the duality of the sexes found throughout nature with prayers addressed to “Mother/Father God” or simply to “Infinite Intelligence.”

the appeal to a divinity; one of the basic elements in any religious cult, creating an illusory feeling of contact with the supernatural in the believer and psychological communality in the religious group. Arising from the magic of the word (incantation), prayer takes the form of petition and subsequently also of thanksgiving and praise. Prayer forms provided the model for religious poetry (psalms, for example) and later for certain genres of folklore (such as the Russian spiritual verses) and lyric poetry.

In antiquity, prayer formed part of a public ritual that sometimes had immediate social and political significance. Christianity introduced inward (”mental”) prayer, which acquired particular importance in mysticism. Christian theology strives to make a distinction between “true” prayer, asking god for mercy, and “pagan” incantations, oriented toward obtaining certain benefits, warding off misfortunes, and so forth. In the religious life of Christian communities importance has been ascribed to both interpretations of prayer; an opposition has been constantly maintained between public liturgical prayer and individual prayer, between outward and inward prayer, between the formal-ritualistic and the emotional. In the history of religion the struggle for a certain form of prayer has often been related to a rivalry between social currents within the church.

Feedback
Flashcards & Bookmarks ?
Please log in or register to use Flashcards and Bookmarks. You can also log in with
Flashcards ?
My bookmarks ?
+ Add current page to bookmarks
Mentioned in ?
References in classic literature ?
And anyhow I'd always be too tired at night to bother saying prayers. People who have to look after twins can't be expected to say their prayers.
"You must say your prayers while you are under my roof, Anne."
View in context
'Oh, do please open the door--or do you wish me to freeze under your window while you say your prayers?'
He did not reply and she heard him muttering something, probably his prayers.
He did not reply, but continued to read his prayers.
'Yes, I could love a man like that--such eyes and such a simple noble face, and passionate too despite all the prayers he mutters!' thought she.
Having finished all the evening prayers, he now stood motionless, his eyes looking at the end of his nose, and mentally repeated with all his soul: 'Lord Jesus Christ, Son of God, have mercy upon me!'
View in context
And Agamemnon answered, "Fly if you will, I shall make you no prayers to stay you.
This will be best, for the gods ever hear the prayers of him who has obeyed them."
View in context
Some people mistakenly think that prayer is the mere recitation of a set formulas that we learned when we were young.
How should we pray?
Markets near the mosques during the holy month of Ramazan become a hub for sales of prayer related accessories.
Religious items sale on rise in Ramazan
Salat-ul-Tasbeeh: Salat-ul-Tasbeeh is the Prayer of Divine Glorification and offering Salat-ul-Tasbeeh daily is excellent.
Prayers in Islam