[′presh·ər ‚swich]
(electricity)
A switch that is actuated by a change in pressure of a gas or liquid.
McGraw-Hill Dictionary of Scientific & Technical Terms, 6E, Copyright © 2003 by The McGraw-Hill Companies, Inc. 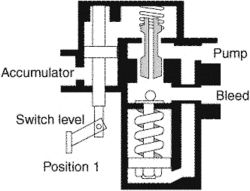 A switch used to turn an electrical device on or off when a specified fluid pressure is reached. For example, a pressure switch in some hydraulic systems comes into operation when the hydraulic pressure drops to a cut-in pressure value. Pressure switches are also used in aircraft starting systems and engine-hour meters.
An Illustrated Dictionary of Aviation Copyright © 2005 by The McGraw-Hill Companies, Inc. All rights reserved

Feedback
Flashcards & Bookmarks ?
Please log in or register to use Flashcards and Bookmarks. You can also log in with
Flashcards ?
My bookmarks ?
+ Add current page to bookmarks
Mentioned in ?
References in periodicals archive ?
According to Lansey, "The bellows is smaller than what you can get from another type of pressure switch, and there's a big push for military vehicles to get lighter, because the military wants to make them airliftable.
Every ounce counts. (Fluid Handling and Fluid Power)
The "Global Pressure Switch Market Analysis & Trends - Industry Forecast to 2027" report has been added to ResearchAndMarkets.com's offering.
Global Pressure Switch Market Analysis & Trends and Industry Forecast to 2027
SOR 102/103 Differential Pressure Switches, R/B Series Pressure and Temperature Switches, HB/HBME Explosion Proof Terminal Box Accessories and Large Level Switches with S3 or T6 housings have all received the TS Mark.
SOR Obtains TS Mark Product Certification Approval for Taiwan
FMTV-A1 models with Caterpillar 3126 engines use the digital-style 6 psi-activated pressure switch, NSN 5930-01-515-6564.
Engine oil light reminder
During the preliminary setup before the actual calibration, the maintainer removed the front faceplate from the pressure switch and connected alligator clips from the multimeter to the electrical contacts inside the switch.
Immediate changes
The unloader valve is usually built into the pressure switch assembly.
Fix your balky air compressor
10 August 2010 - US biotherapeutics company Ikaria Inc said yesterday that its INOMAX DS drug-delivery systems in the US are being voluntarily recalled due to the potential failure of a pressure switch which may have an impact on the administration of INOMAX (nitric oxide) for inhalation to patients.
Ikaria recalls INOMAX DS drug-delivery system
"For instance, one single electronic pressure switch is now enough to perform the operations previously carried out by three separate devices, because the pressure switch has a built-in digital pressure gauge and pressure transmitter."
Pressure and level in water treatment: Stephen Ratcliffe, product marketing manager for Baumer tells how the company's pressure instrumentation works for Degremont
A low pressure switch option can automatically shut off power, sound an alarm, or perform other functions when a fire occurs.
Fire detection and suppression systems for fume hoods
While a broad range of sensors are available for temperature and pressure control in process automation applications, a simple solution, like a pressure switch activating power directly without the use of an interconnected controller or electronics circuit, is often the best--and in many cases, the most cost-effective.
Electromechanical switches for pharmaceutical processes: simple and cost-effective solutions for temperature and pressure control
Powered by battery, line or directly from a loop, these digital gauges can also be equipped with switches or a 4-20mA output, allowing the gauges to do the work of a pressure switch or transmitter while providing a local reading On a large LCD display.
Sanitary pressure gauges
The Electronics Division of Hydac Technology Corp., Bethlehem, Pa., has developed a new pressure switch, specifically aimed at mobile equipment applications.
Hydac's new pressure switch for mobile equipment