(priz-mat -ik) An astrometric instrument for determining the position of a celestial body by the accurate timing of its passage across a vertical circle of the celestial sphere. It usually consists of an artificial horizon (such as a mercury surface) and a prism, which are placed in front of a telescope. The prism is fixed in position so that a fixed altitude, usually 45° or 60°, is used. Parallel rays of light falling on the artificial horizon and the prism are each reflected by the prism into the telescope (see illustration). As the celestial body moves toward the fixed altitude, the two images approach each other from top and bottom of the field of view. At the fixed altitude the two images lie close together on the same horizontal line through the center of the field. The time is then recorded, usually electronically.
Collins Dictionary of Astronomy © Market House Books Ltd, 2006
The following article is from The Great Soviet Encyclopedia (1979). It might be outdated or ideologically biased.

The impersonal astrolabe, a high-precision modified version of the prismatic astrolabe, was invented by the French astronomer A. Danjon during the period 1951–53; it has become widely used in determining time and latitude. 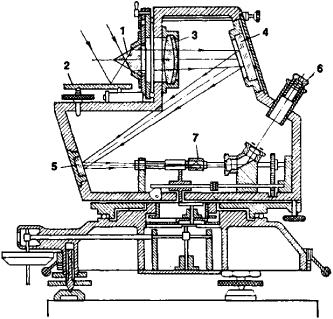 A mercury horizon is placed under the prism. Light from the star being observed falls on the upper face of the prism and is refracted. One image of the star appears in the focal plane of the objective, and a second image is obtained as light from the star passes through the lower face of the prism after being reflected by the mercury horizon. As a result of the apparent diurnal motion of the star, the two images approach each other and coincide. The images appear in the eyepiece as the star crosses the almucantar at a distance from the zenith of close to 30°. In order to record this time the instrument’s micrometer is equipped with a special Wollaston prism. A series of times is recorded on a chronograph by shifting the Wollaston prism with a micrometer screw fitted with a contact drum. This increases the precision of the final results, which are comparable to the precision afforded by classical meridian instruments used in determining time and latitude.

[priz′mad·ik ′as·trə‚lāb]
(engineering)
A surveying instrument that makes use of a pan of mercury forming an artificial horizon, and a prism mounted in front of a horizontal telescope to determine the exact times at which stars reach a fixed altitude, and thereby to establish an astronomical position.
McGraw-Hill Dictionary of Scientific & Technical Terms, 6E, Copyright © 2003 by The McGraw-Hill Companies, Inc.

A surveying instrument used to make the celestial observations needed in establishing an astronomical position. The instrument (see illustration) consists of an accurate prism, a small pan of mercury to serve as an artificial horizon, an observing telescope with two eyepieces of different power, level bubbles and leveling screws, a magnetic compass and azimuth circle, adjusting screws, flashlight-battery power source, light, and a rheostat to control the intensity of illumination.

By using a fixed prism, the instrument measures a fixed altitude, usually 45°. As a rising star increases altitude past that for which the instrument was constructed, the direct image appears to move upward from the bottom of the field of vision to the top. The image reflected by the mercury horizon appears to move downward from top to bottom. At the established altitude the rays produce images at the center of the field of view. A fixed altitude is used to minimize error due to variations from standard atmospheric refraction. Each accurately timed observation provides one line of position.