A gas-filled electronic device for the detection of X-rays, gamma rays, and other ionizing radiation and the counting of charged particles. A potential difference is maintained across a pair of electrodes. Radiation entering the tube ionizes the gas along its path and the resulting electrons are attracted toward the positively charged electrode. The size of the output pulse of the counter is proportional to the number of electron-ion pairs produced by the ionizing event and thus to the energy of the radiation. It is possible to differentiate between various forms of ionizing radiation. In astronomy proportional counters are used mainly for X-ray studies, where they provide sensitive detection and some spectral information.

Imaging proportional counters (IPCs) have now been developed, which record the position of each incident X-ray photon so that a two-dimensional image is built up. Linear resolutions of 200–500 μm are obtained in the 0.2–5 keV energy band. Such devices have been used successfully in a number of X-ray astronomy satellites, including the Einstein Observatory, EXOSAT, and ROSAT. Another development is the gas scintillation proportional counter (SPC), which has an energy resolution about twice that of conventional counters, and has been successfully used on Tenma, EXOSAT, and Asca.

a gas-filled discharge device for the detection of ionizing particles and quanta. The counter produces a signal with an amplitude proportional to the energy of the particle being detected. On passing through the gas inside the counter, a charged particle produces in its path ion-electron pairs, the number of pairs depending on the energy lost by the particle in the gas.

A cylinder usually serves as the cathode in a proportional counter, and a fine (10–100 μ) metal wire, stretched along the axis of the cylinder, serves as the anode (see Figure 1). Gas amplification occurs near the anode at a distance comparable to the wire’s diameter; beyond this region, the electrons drift under the action of the electric field without “multiplication.” Proportional counters are filled with an inert gas (the gas must not absorb drifting electrons) with the addition of a small amount of a polyatomic gas, which absorbs the photons formed in the avalanches. 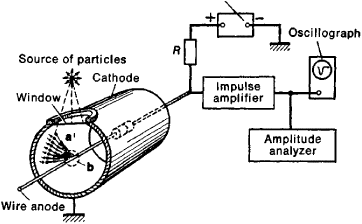 Figure 1. Diagram of a proportional counter: (a) region of electron drift and (b) region of gas amplification

Proportional counters are used to detect all types of ionizing radiation. There are counters designed to detect, for example, alpha particles, electrons, nuclear fission fragments, neutrons, gamma quanta, and X-ray quanta. In the case of proportional counters that detect neutrons, gamma, and X-ray quanta, interactions with the gas filling the counter are employed to produce secondary charged particles that lend themselves to detection. The proportional counter, together with the ionization chamber, played an important role in nuclear physics in the 1920’s and 1930’s as virtually the only spectrometric detector.

In the late 1960’s, the physics of high-energy particles found a new use for the proportional counter in the form of a proportional chamber, which consists of a large number (102–103) of proportional counters arranged in coplanar fashion in a gas-filled enclosure. Such a device makes it possible not only to measure the ionization of a particle in each individual counter but also to locate the track of the particle. Typical parameters of proportional chambers are a distance between adjacent anode wires of ~ 1–2 mm, a distance between anode and cathode planes of approximately 1 cm, and a resolution time of ~ 10-7sec. The development of microelectronics and the introduction of electronic computers in experimental techniques have made possible the development of systems consisting of tens of thousands of individual wires connected directly to a computer, which stores and processes all information from the proportional chamber. Such systems thus function simultaneously as both high-speed spectrometers and track registration detectors.

The drift chamber, which uses the drift of electrons preceding the formation of an avalanche to measure the track of a particle, appeared in the 1970’s. By alternating the anodes and cathodes of the individual proportional counters in one plane and measuring the drift time of electrons, it is possible to measure the track of a particle through the chamber with a high degree of precision (~0.1 mm) with only one-tenth as many wires as in a proportional chamber.

Proportional counters are used not only in nuclear physics but also in such fields as the physics of cosmic rays, astrophysics, engineering, medicine, geology, and archaeology. For example, an X-ray fluorescence analysis of the lunar soil was carried out by means of a proportional counter mounted on Lunokhod 1.

[prə′pȯr·shən·əl ′kau̇nt·ər]
(nucleonics)
A radiation counter consisting of a proportional counter tube and its associated circuits; resembles a Geiger-Müller counter, but with a different counting gas (argon methane) and a lower voltage on the tube; used to measure α, β, and x-rays; has low sensitivity for γ-radiation.
McGraw-Hill Dictionary of Scientific & Technical Terms, 6E, Copyright © 2003 by The McGraw-Hill Companies, Inc.

Feedback
Flashcards & Bookmarks ?
Please log in or register to use Flashcards and Bookmarks. You can also log in with
Flashcards ?
My bookmarks ?
+ Add current page to bookmarks
Mentioned in ?
References in periodicals archive ?
Part of the emitted x-ray flux undergoes Bragg diffraction and those x rays of the proper wavelength are focused to a line, which is occupied by the entrance of a proportional counter. The x rays must first be transmitted through a window before it gets into the gaseous environment of the counter.
The most commonly used proportional counter gases are either P-10 (90 % Ar with 10 % methane) or xenon and a quench gas, such as methane or carbon dioxide.
The x-ray counter is considered a proportional counter, if operated in the correct voltage range.
High count rate electron probe microanalysis
This Unconventional Stellar Aspect (USA) experiment consists of a large array of traditional X-ray proportional counters, with an "effective area" of 2,000 square centimeters.
HST Servicing Mission