(prŏpĭlē`əm), in Greek architecture, a monumental entrance to a sacred enclosure, group of buildings, or citadel. A roofed passage terminated by a row of columns at each end formed the usual type. Known examples include those at Athens, Olympia, Eleusis, and Priene. The most splendid example are the Propylaea at Athens upon the west end of the Acropolis; their restored remains still stand. Of Pentelic marble, they were built (437–432 B.C.) at the command of Pericles by the architect MnesiclesMnesicles
, Greek architect, 5th cent. B.C. He designed the propylaea, and the Erechtheum is also sometimes ascribed to him. Both are on the acropolis at Athens.
..... Click the link for more information. .
The Columbia Electronic Encyclopedia™ Copyright © 2013, Columbia University Press. Licensed from Columbia University Press. All rights reserved. www.cc.columbia.edu/cu/cup/

The monumental gateway to a sacred enclosure; specifically, the elaborate gateway to the Acropolis in Athens.

a formal passageway formed by porticoes and colonnades located symmetrically to the axis of movement. Propylaea are characteristic of the architecture of ancient Greece, where they were built as early as the Aegean culture. The structures were built at the main entrance to the acropolis or sacred grounds (temenos). An outstanding landmark in ancient Greek architecture is the Propylaea of the Athenian Acropolis, which was built between 437 and 432 B.C. by the architect Mnesicles. In later Greek architecture propylaea were scarcely used. 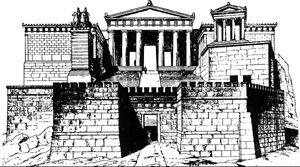 propylaea, 2
1. The monumental gateway to a sacred enclosure.
2.(pl., cap. Propylaea) Particularly, the elaborate gateway to the Acropolis in Athens.
McGraw-Hill Dictionary of Architecture and Construction. Copyright © 2003 by McGraw-Hill Companies, Inc.

Feedback
Flashcards & Bookmarks ?
Please log in or register to use Flashcards and Bookmarks. You can also log in with
Flashcards ?
My bookmarks ?
+ Add current page to bookmarks
Mentioned in ?
References in periodicals archive ?
The propylaeum, or pylon, is a large wall used at the entrance to temples and palaces.
Views of ancient Egypt
Just before World War II, the London Midland & Scottish Railway had also proposed the rebuilding of Euston, to an American-inspired design by Percy Thomas, but the Georgian Group proved to the directors that the propylaeum could be re-erected further south, on the Euston Road.
But in 1961, the image of the railways represented by the propylaeum, that relic of the steam age, was simply unacceptable at a time when Britain, desperate to appear modern, had surrendered to the Gadarene worship of the car.
A decade ago, in 1996, the historian Dan Cruickshank attempted to launch the Euston Arch Trust, dedicated to rebuilding the propylaeum. The estimated cost then was 5m [pounds sterling].
3), the propylaeum was not built as the Greeks would have built it.
Steam ahead: the proposed rebuilding of London's Euston station is an opportunity to atone for a great architectural crime
Delchaye (ed.), Synaxarium Ecclesiae Constantinopolitanae e Codice Sirmondiano nunc Berolinensi: Adiectis Synaxariis Selectis, Societe des Bollandistes, Propylaeum ad Acta Sanctorum, Novembris, Brussels, 1902, cols.
A winged St John the Baptist icon in the British Museum
You are met by a propylaeum which consists of the timber-covered arc of an open-air theatre and its wooden scena which inflects you towards the ascending terraces by which you approach the entrance.
Finnish Acropolis
He has made a celebratory propylaeum which marks the entrance of the small tree-lined route and cut block heights to six stories, so that the thoroughfare is not too dark.
Intra Maurios
This frames the park from the street and, looking in reverse, acts as a formal propylaeum marking the beginning of the city from the grass and trees.
On the edge: an idealistic language school sensitively intervenes between park and town, academia and community