(prŏs'təglăn`dən), any of a group of about a dozen compounds synthesized from fatty acids in mammals as well as in lower animals. Prostaglandins are highly potent substances that are not stored but are produced as needed by cell membranes in virtually every body tissue. Different prostaglandins have been found to raise or lower blood pressure and regulate smooth muscle activity and glandular secretion. One such substance, which stimulates contraction of the uterus, is used clinically to induce labor; another has been in experimental use as a birth control agent. Prostaglandins also control the substances involved in the transmission of nerve impulses, participate in the body's defenses against infection, and regulate the rate of metabolism in various tissues. Several prostaglandins have been shown to induce fever, possibly by participating in the temperature-regulating mechanisms in the hypothalamus; they also play a part in causing inflammation. The fact that aspirin and other nonsteroidal anti-inflammatory drugs have been shown to inhibit prostaglandin synthesis may account for their usefulness in reducing fever and inflammation. Many naturally occurring prostaglandins as well as many artificial forms have been synthesized in the laboratory.
The Columbia Electronic Encyclopedia™ Copyright © 2013, Columbia University Press. Licensed from Columbia University Press. All rights reserved. www.cc.columbia.edu/cu/cup/
The following article is from The Great Soviet Encyclopedia (1979). It might be outdated or ideologically biased.

in mammals, a hormone that has a broad spectrum of physiological action. Prostaglandins were discovered in human semen by the Swedish scientist U. Euler in 1936. Initially, they were thought to be secretions of the prostate gland (hence the name). They were obtained in a pure form in 1956–65 by Swedish and American scientists.

About 20 natural prostaglandins are known, including thick liquids and low-melting crystalline substances. All prostaglandins are unsaturated hydroxy fatty acids that have a skeleton of 20 carbon atoms. According to their chemical structure, prostaglandins are divided into four groups—A, B, E, and F—E and F prostaglandins being the most important biologically. The subscripts in the formula below indicate the number of double bonds in the lateral chains of the molecule. 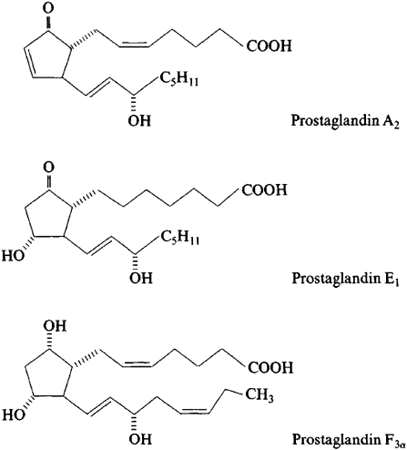 Prostaglandins are found in low concentrations (about 1 μg/g) in almost all organs, tissues, and biological fluids of higher animals. The most important physiological effect that is stimulated by prostaglandins is the ability to contract smooth muscles, especially the muscles of the uterus and fallopian tubes; at childbirth and during menstruation, the concentration of prostaglandins in uterine tissues increases substantially. For this reason, they are used in obstetrics and gynecology to facilitate normal labor and to artificially terminate pregnancy in its early stage.

Prostaglandins are also cardiotonics and bronchodilators. Arterial pressure is lowered by A and E prostaglandins and raised by F prostaglandin. A, E, and F prostaglandins intensify coronary and renal blood flow, inhibit gastric secretion, and affect the endocrine glands, including the thyroid gland; they also affect water-salt metabolism by altering the ratio Na+: K+ and blood coagulation by inhibiting the aggregation of thrombocytes.

The classification of prostaglandins as local, or cellular, hormones is justified by their varied functions and the absence of a special organ for their biosynthesis. Their mechanism of action is still unclear. It has been established that prostaglandins affect the activity of the enzyme adenyl cyclase, which regulates the concentration of cyclic adenosine 3’: 5’-monophosphate (cyclic AMP) in the cell. Since prostaglandins influence the biosynthesis of cyclic AMP and since cyclic AMP participates in hormonal regulation, a possible mechanism of action of prostaglandins could consist in correcting (intensifying or weakening) the action of other hormones.

Clinical tests have shown prostaglandins to be promising in the treatment of such conditions as gastric ulcer, asthma, hypertonia, thromboses, arthritides, and inflammations of the nasopharynx. For medical and research purposes, prostaglandins are produced: (1) by enzymatic synthesis based on polyunsaturated fatty acids that are produced in the food-processing industry, (2) by complete chemical synthesis in nine to 13 stages chiefly based on cyclopentadiene, and (3) by partial synthesis in three to five stages based on prostaglandin A2 and E2 derivatives that are present in high concentrations (reaching 1.4 percent of the raw mass) in several varieties of the soft marine coral Plexaura homomalla.

Feedback
Flashcards & Bookmarks ?
Please log in or register to use Flashcards and Bookmarks. You can also log in with
Flashcards ?
My bookmarks ?
+ Add current page to bookmarks
Mentioned in ?
References in periodicals archive ?
Cellular prostaglandin E2 production by membranebound prostaglandin E synthase-2 via both cyclooxygenases-1 and -2.
Molecular Characterization and Differential Expression of Two Prostaglandin E Synthase 2 Orthologs in Coilia nasus
[9.] Sobota RM, Muller PJ, Heinrich PC, Schaper F Prostaglandin EI inhibits IL-6-induced MCP-I expression by interfering specifically in IL-6-dependent ERKI/2, but not STAT3, activation.
Effect of Prostaglandin El Analog Misoprostol in An Ovalbumin-Induced Allergic Rhinitis Model
Disk, "Prostaglandin release during femtosecond laser-assisted cataract surgery: main inducer," Journal of Refractive Surgery, vol.
The Effect of NSAID Pretreatment on Aqueous Humor Prostaglandin E2 Concentration in Eyes Undergoing Femtosecond Laser-Assisted Capsulotomy
Comparison of Prostaglandin E2 Vaginal Gel versus Intracervical Foley's Catheter Balloon for Induction of Labour 2013.
COMPARISON OF INDUCTION OF LABOR WITH FOLEY CATHETER AND PROSTAGLANDINS IN POSTDATE PREGNANCIES
Dixon et al., "Stress protein activation by the cyclopentenone prostaglandin 15-deoxy-delta12,14-prostaglandin J2 in human mesangial cells," Kidney International, vol.
15-Deoxy-[DELTA]12,14-prostaglandin [J.sub.2] Exerts Antioxidant Effects While Exacerbating Inflammation in Mice Subjected to Ureteral Obstruction
The prospective study entitled "A comparative study of efficacy of different prostaglandin as monotherapy in POAG shows following observations:
To compare the efficacy of different prostaglandins as monotherapy in Poag
* The report reviews Prostaglandin E2 Receptor EP2 Subtype (Prostanoid EP2 Receptor or PTGER2) targeted therapeutics under development by companies and universities/research institutes based on information derived from company and industry-specific sources
Prostaglandin E2 Receptor EP2 Subtype (Prostanoid EP2 Receptor or PTGER2) - Pipeline Review, H1 2016
Table-1: Frequency of maternal outcome of early intervention with prostaglandin E2 in women with prom in term of chorioamniotis with respect to age groups.
Maternal outcome of early intervention in women with prom at term (37 weeks or more)
Average number of services per conception observed was 2.5 and 2.25 in animals treated with single and double dose of prostaglandin, respectively.
Single and double dose of [PGF.sub.2][alpha] for estrus induction and conception rate in Gir cows
The purpose of the present study was to compare the biofilm formation capacity and the level of prostaglandin secretion of the C.
Arachidonic acid affects biofilm formation and PGE2 level in Candida albicans and non-albicans species in presence of subinhibitory concentration of fluconazole and terbinafine
A cell's fate, the researchers found, is determined by the nearby presence of prostaglandin E2, a messenger molecule best known for its role in inflammation and pain.
Scientists find cell fate switch that decides liver, or pancreas?
Effect of Rosi on the Protein Expressions of Prostaglandin E Synthases in db/db Mice.
PPAR[gamma] agonist rosiglitazone suppresses renal mPGES-1/PGE2 pathway in db/db mice