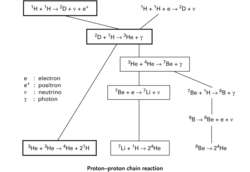 (p-p chain) A series of nuclear fusion reactions by which energy can be generated in the dense cores of stars. The overall effect of the chain reaction is the conversion of hydrogen nuclei to helium nuclei with the release of an immense amount of energy. The energy maintains the core temperature, some of it flowing to the stellar surface. The p-p chain is an efficient energy source even at core temperatures of only 15 million K; it is therefore believed to be the major source of energy in the Sun and in all main-sequence stars that are cooler (less massive) than the Sun. The carbon cycle predominates in the hotter, somewhat more massive stars.

The sequence of steps of the p-p chain is shown in the illustration, with the principal sequence outlined heavily in black. The possible chains occur simultaneously but in what is thought to be 99.75% of the reactions, the sequence begins with two hydrogen nuclei (i.e. protons) combining to emit a positron and a neutrino and forming a nucleus of deuterium. The deuterium then combines with a proton to yield a nucleus of helium–3 and a photon. About 95% of the helium–3 nuclei will combine together to give helium–4, liberating two protons. Overall, each cycle thus converts four protons into one helium–4 nucleus with the release of energy. High collision speeds (plus a quantum-mechanical process known as tunneling) are required for the protons to fuse, since they have to overcome the mutual repulsion arising from their positive charge.