movement or deformation of a physical object by thought or willpower alone (i.e., without the application of physical force). Telekinesis (sometimes abbreviated TK), an older term for psychokinesis (sometimes abbreviated PK), was first used by the German-Russian psychical researcher Alexander Asakof about 1890. Henry HoltHolt, Henry,
1840–1926, American author and publisher, b. Baltimore. In 1866 he became a partner in the publishing firm that became (1873) Henry Holt & Company.
..... Click the link for more information. , an American publisher and author, coined the term psychokinesis in 1914 in his book On the Cosmic Relations; the American parapsychologist J. B. Rhine adopted the term in 1934 in conjunction with experiments to see if people could influence the outcome of falling dice. The term telekinesis, or teleportation, was initially applied to the motion of objects thought to be caused by ghosts or other supernatural beings. As evidence of fraudulent activities by mediums (for example, raising a table while tapping on its underside in a darkened seance room) accumulated, the term psychokinesis came into use to differentiate the "legitimate" PK environment from the fraudulent TK environment. At present, TK is now regarded as a special case of PK, that is, psychokinesis is used to describe a variety of paranormal phenomena (including movement at a distance) while telekinesis refers only to movement at a distance.
The Columbia Electronic Encyclopedia™ Copyright © 2013, Columbia University Press. Licensed from Columbia University Press. All rights reserved. www.cc.columbia.edu/cu/cup/ 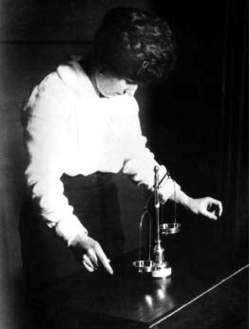 Abbreviated as PK, psychokinesis is the movement of objects without physically touching them, by using the power of the mind alone. It is a term that was adopted by Dr. Joseph Banks Rhine and his research team at Duke University in 1934, when they were experimenting with mentally influencing the roll of dice. Many Spiritualists who are physical mediums demonstrate psychokinesis in their séances.

Russian medium Nelya Mikhailova specializes in moving objects by concentrating on them, and is known in Russia as “the PK medium.” She can pass her hands over a compass and set the needle spinning at high speed, she can cause cigarettes to roll across a table top, she can move a whole box of matches that have been emptied onto a table surface.

Similarly, Swedish medium Anna Rasmussen—whose powers first became obvious when she was twelve—has affected pendulums. Professor Winther of Copenhagen studied her intensively between 1922 and 1928. He designed a sealed glass case inside which hung a variety of pendulums. They were of different weights and supported on silk threads. Anna could concentrate on them and cause any one of them, as chosen by the professor, to swing in any direction requested. Anna had a spirit guide named Dr. Lasaruz whom she claimed brought about the movements.

A similar phenomenon is Telekinesis, which is the movement of objects by spirits. An example would be the falling of a picture off a wall at the moment of someone’s death. Apportation is similar, though the object there is usually moved from one dimension to another. There is a commonality between telekinesis and the movement of objects attributed to poltergeists. When objects are moved by spirit the object usually moves smoothly. Poltergeist energy is such that the object moves unpredictably and erratically.

[¦sī·kō·kə′nē·səs]
(psychology)
The alleged ability of an individual to exert a mental influence on physical events in advance of their occurrence. Abbreviated PK.
McGraw-Hill Dictionary of Scientific & Technical Terms, 6E, Copyright © 2003 by The McGraw-Hill Companies, Inc.

Feedback
Flashcards & Bookmarks ?
Please log in or register to use Flashcards and Bookmarks. You can also log in with
Flashcards ?
My bookmarks ?
+ Add current page to bookmarks
Mentioned in ?
References in periodicals archive ?
"Psychokinesis" has freed her of such an obsession.
[INTERVIEW] Actress learns how to be stress-free with 'Psychokinesis'
In association with psychokinesis this allows faster than light (and also back in time) signaling.
Rationality of the paranormal, an essay on seeming contradictions
Participants were tested individually in a sound-proof darkened room in order to help concentration and to keep the cover of a psychokinesis experiment plausible.
Arousal, erroneous verbalizations and the illusion of control during a computer-generated gambling task
The five factors are interpreted as follows: factor one--"mental and psychic phenomena (MPP)"; factor two--"religious belief (RB)"; factor three--"psychokinesis (PK)"; factor four--"supernatural entities (SE)"; and factor five --"common paranormal perceptions (CPP)."
Creation and Validation of the Belief in the Supernatural Scale
"The company withdrew all support when it found out I was planning a mass psychokinesis experiment, to test the ability of the mind to affect objects remotely.
CELEBRITY PAUL McKENNA: I like to control cash.. and minds
Parapsychology was, of course, included since some officers were haunted by the possibility that psychokinesis might just provide an enemy with a means of disabling sophisticated electronic equipment.
In the Mind's Eye: Enhancing Human Performance
He was the founder of the Greek Society for Psychical Research (GSPR), author of the theory of psychoboly (the forerunner of psychokinesis), a tireless psychical investigator, and a figure of international renown at his time, having initiated some of the earliest long-distance telepathy experiments (between Athens, New York, Paris, Vienna, and other European capitals).
ANGELOS TANAGRAS: THE LOST DIARY THE LIFE AND WORKS OF THE "FATHER" OF GREEK PARAPSYCHOLOGY BASED ON HIS HANDWRITTEN DOCUMENTS
Time and again, I have been asked by well-meaning people why I believe individuals who claim to have special psychic and supernatural powers-like psychokinesis, telepathy, remote viewing, astral projection and precognition-when there is no scientific proof.
Paranormal evidence is hard to ignore
The student had asked him for help when she found none of her professors would monitor her work attempting to replicate Helmut Schmidt's psychokinesis experiments using an electronic random number generator and experimental protocols she had developed.
In Memoriam: Robert G. Jahn, Scientist, Mentor, Friend
Influencing the behavior of an object or changing its shape without physical means is the very definition of telekinesis, or psychokinesis.
Our wonderful crazy world
Uri Geller first used his powers of telepathy and psychokinesis (spoon bending) when he was just four years old.
URI'S CRYSTAL CAVE; MY PLACE URI GELLER
These terms are not fully interchangeable because psychokinesis is included in "psi" but not "ESP"; regardless, the authors of the two volumes switch use of terms, hopefully in a manner not confusing to the reader.
EXTRA SENSORY PERCEPTION: SUPPORT, SKEPTICISM, AND SCIENCE. VOLUME 1: HISTORY, CONTROVERSY, AND RESEARCH