Pulled up stakes | Article about pulled up stakes by The Free Dictionary
https://encyclopedia2.thefreedictionary.com/pulled+up+stakes
Printer Friendly

1
1. one of a number of vertical posts that fit into sockets around a flat truck or railway wagon to hold the load in place
2. a method or the practice of executing a person by binding him to a stake in the centre of a pile of wood that is then set on fire
3. Mormon Church an administrative district consisting of a group of wards under the jurisdiction of a president

2
1. the money or valuables that a player must hazard in order to buy into a gambling game or make a bet
2. the money that a player has available for gambling
3. Horse racing a race in which all owners of competing horses contribute to the prize money
Collins Discovery Encyclopedia, 1st edition © HarperCollins Publishers 2005 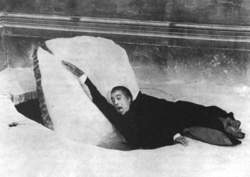 Christopher Lee falls through the ice in Dracula, Prince of Darkness.

The best known way to kill a vampire is by staking it in the heart. This method was prescribed by Sheridan Le Fanu in his novella, “Carmilla,” and was a remedy later lauded by Bram Stoker for his novel, Dracula, and repeated in numerous vampire movies.

The idea of staking the corpse of a suspected vampire or revenant was quite an ancient practice. It was found across Europe and originated in an era prior to the widespread use of coffins. The corpses of persons suspected of returning from their graves would be staked as a means of keeping them attached to the ground below their body. Stakes might be driven through the stomach (far easier to penetrate than the heart area, which required penetration of the rib cage). The body might also be turned face down and the stake driven through the back. In some areas, an iron stake or long needle might be used, while in others not only was wood used but the actual wood to be used prescribed. Ash, aspen (a common wood across northern Europe), juniper, and/or hawthorn were noted in the literature. Additionally, a stake might be driven into the ground over the grave as a way to block the vampire’s rising.

Once coffins were in popular use, the purpose of staking changed somewhat. Where previously the object of the staking was to fix the body to the ground, the purpose of the staking became a frontal assault upon the corpse itself. By attacking the heart, the organ that pumped the blood, the bloodsucking vampire could be killed. Staking the heart was somewhat analogous to the practice of driving nails into a vampire’s head.

In many Russian stories, it was noted that the stake had to be driven in with a single stroke—a second stroke would reanimate the vampire. This method seems to be de rived from a belief in old Slavic tales that advised elimination of enemies, of whatever sort, with one blow.

In Bram Stoker’s Dracula, Lucy Westenra was finally laid to rest by the dual process of thrusting a stake in her heart and decapitation. A similar process was used for the three vampire brides who resided in Castle Dracula. However, Dracula himself was killed by decapitation and a knife plunged into his chest. The idea of staking the vampire became fixed in the modern vampire myth in the play by Hamilton Deane, which deviated from the novel by having the men who tracked Dracula to Carfax destroy the vampire by staking him. That action was repeated in the Universal Pictures version of Dracula (1931) starring Bela Lugosi.

The prominence of the stake led to much speculation in various novels and movies concerning the rationale for the use of wooden stakes. For most, the stake simply did brute physical damage to the heart. Others believed that the vampire was directly affected by wood. For some, the stake finally killed the vampire, while others saw it as a mere temporary measure. Thus, the removal of the stake became a means of reviving the vampire for a literary or movie sequel. Robert Edward Lory made one of the more novel uses of the stake. In his novels, his hero Dr. Damien Hough placed a small wooden sliver into Dracula’s body before reviving him. Thus, if Dracula failed to obey Hough or attacked him, the sliver would be thrust into Dracula’s heart returning him to his deathlike state. One of the more (unintentionally) comic moments in vampire movies occurred in Dracula Has Risen from His Grave (1968) when Christopher Lee pulled a stake from his own heart.

[stāk]
(electricity)
An iron peg used as a power electrode to transfer current into the ground in electrical prospecting.
(engineering)
To fasten back or prop open with a piece of chain or otherwise the valves or clacks of a water barrel in order that the water may run back into the sump when necessary.
A pointed piece of wood driven into the ground to mark a boundary, survey station, or elevation.
McGraw-Hill Dictionary of Scientific & Technical Terms, 6E, Copyright © 2003 by The McGraw-Hill Companies, Inc.

1. A small anvil used for the working of thin sheet metal, so called because it is supported by a sharp vertical prop which is inserted in a hole in the workbench; the sheet-metal worker may select one of a number of different stakes, the particular shape depending on the task.
2. A stick of wood sharpened at one end and set into the ground to act as a boundary marker or to support or hold something.
McGraw-Hill Dictionary of Architecture and Construction. Copyright © 2003 by McGraw-Hill Companies, Inc.