(redirected from put all one's eggs in one basket)
Also found in: Dictionary, Thesaurus, Medical, Idioms.

see ovumovum
, in biology, specialized plant or animal sex cell, also called the egg, or egg cell. It is the female sex cell, or female gamete; the male gamete is the sperm. The study of the ovum is included in the science of embryology.
..... Click the link for more information. .
The Columbia Electronic Encyclopedia™ Copyright © 2013, Columbia University Press. Licensed from Columbia University Press. All rights reserved. www.cc.columbia.edu/cu/cup/

A single, large, living, female sex cell enclosed in a porous, calcareous shell through which gases may pass. Although they vary in size, shape, and color, the eggs of chickens, ducks, geese, and turkeys are essentially the same in structure and content (see illustration). Inward from the shell are the outer and inner shell membranes which are also permeable to gases. The membranes are constructed to prevent rapid evaporation of moisture from the egg but to allow free entry of oxygen, which is necessary for life. Air begins to penetrate the shell soon after the egg is laid, and it tends to accumulate in a space between the two membranes at the large end of the egg. See Cell (biology) 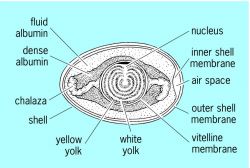 Egg of a bird

The inner shell membrane surrounds a mass of fluid albumin which, in turn, encloses a body of dense albumin; these two types of protoplasm constitute the so-called egg white. The central part of the egg is occupied by the yolk, which contains the vital egg nucleus and its associated parts. The yolk consists of alternating layers of yellow and white yolk. The yolk, enclosed by the vitelline membrane, is held in place by the chalaza which is anchored at each end of the egg and prevents undue mechanical disturbance. See Cell nucleus, Yolk sac

the female sex cell of animals, including humans, and plants from which a new organism arises as a result of fertilization or parthenogenesis. The animal egg is a highly specialized cell that contains the stored nutrients essential for embryonic development. It usually is surrounded by membranes. Egg formation, or oogenesis, generally takes place in the ovaries. The eggs of most animals are round or oval; in insects and cephalopod mollusks they are elongated. The eggs of the most primitive multicellular animals—sponges and some coelenterates—do not have any distinctive shape and are capable of amoeboid movement.

The size of an egg varies with the amount of yolk in the cytoplasm. For example, the yolk-poor eggs of placental mammals range in diameter (not counting membranes) from 50 micrometers (μm) in voles (or 70 μm in rats and mice) to 140–150 μm in bats, guinea pigs, cows, and dogs. Among placental mammals, sheep have the largest eggs, measuring 180 μm in diameter. Human eggs measure 89–91 μm in diameter. The eggs of many different invertebrates, including coelenterates, worms, echinoderms, and mollusks, are similar in size.

By storing fairly large amounts of yolk, eggs may attain large, sometimes gigantic, dimensions. The egg diameter is about 1.4 mm in some invertebrates (some mollusks, echinoderms, and crustaceans), 4.3 mm in the platypus, 7–9 mm in salmon, and 50–70 mm in elasmobranchs. Avian eggs are also very large. The chicken egg measures more than 30 mm in diameter (not counting the surrounding albuminous membrane), and the ostrich egg has a diameter of 80 mm (the total length of the egg in the shell is 155 mm).

There is usually an inverse correlation between the number of eggs produced and egg size. Specifically, animals that protect their offspring generally produce a few large eggs. Birds, for example, lay one (penguins and some birds of prey) to 22 (partridges) large eggs. Catfish of the family Ariidae, whose males carry the eggs in their mouths, lay 20 to 40 eggs measuring 17–21 mm in diameter (the largest eggs among bony fishes). Fishes that deposit their eggs in the water and show no concern for their young are extremely fecund. Many cyprinids (for example, the Caspian roach, bream, and crucian carp) deposit about 300,000 eggs, the wild carp about 1.5 million, and the cod about 10 million. The diameter of the eggs is less than 2 mm.

Polymorphism is characteristic of the eggs of some animals. Specifically, seasonal polymorphism is found in animals having a complex reproductive cycle, for example, rotifers, water fleas, and aphids. In water fleas, for example, several generations of females succeed one another in summer, producing yolk-poor eggs with a thin membrane that develop without fertilization. With the onset of unfavorable conditions, the females deposit yolk-rich fertilized “winter” eggs enclosed in a protective membrane; these eggs develop only after a long period of dormancy. Rotifers produce three types of eggs: diploid eggs, from which females are produced by parthenogenesis; small haploid eggs, which develop into males; and dormant, or “winter,” eggs, which develop into females after fertilization. Sexual dimorphism of eggs also exists. In butterflies, caddis flies, reptiles, and birds, the eggs that develop into males and females differ with respect to the sex chromosomes (female heterogamety). Rotifers and some worms are marked by external sexual dimorphism: the large eggs produce females, and the small ones males.

The mature egg has a definite organization, primarily manifested by polarity. The nucleus is frequently found near the yolk-poor animal pole, whereas the yolk inclusions are concentrated fairly close to the opposite vegetal pole. Moreover, the eggs of many animals exhibit local differences. Such differences are especially pronounced in mollusks, worms, and ascidians. In these animals the fate of the various regions of the egg has already been determined, and if the egg is divided into parts, deformed embryos lacking one or more organs develop (mosaic eggs). In other animals, echinoderms in particular, the organization of the egg is more unstable, so if the egg is divided into parts, several small but essentially normal embryos develop (regulative eggs). Mosaic and regulative eggs formerly were regarded as opposed to each other, but the differences between them are no longer believed to be basic. They appear to be caused by more or less early differentiation of the cytoplasm.

The surface of an egg is invested with a semipermeable elastic plasma membrane capable of contracting. Numerous projections, or microvilli, form on the surface (cortical) layer of the cytoplasm. In many animals the surface layer contains bodies that are rich in mucopolysaccharides and that vary in diameter from several tenths of a micrometer (cortical granules of bivalve mollusks, echinoderms, and mammals) to 5–40 μ.m (cortical alveoli of bony fishes). The bodies are arranged in one or more rows near the plasma membrane. Their contents are released from the cytoplasm near the membrane when the egg is activated. Pigment granules are usually found near the surface as well. Mitochondria, Golgi complexes (concentrated at the periphery of the egg in many animals), endoplasmic reticulum, and ribosomes are regular constituents of the egg, as they are in other cells. The cell center of the egg disappears in most animals toward the end of oogenesis. It occasionally remains, for example, in some leeches and planarians, during maturation divisions. In other cases, a new cell center is formed after fertilization from centrioles introduced by sperm or, infrequently, by new formation. Yolk inclusions are a specific constituent of the cytoplasm. The differences in amount and distribution of yolk in various animals are responsible for the different kinds of cleavage. The cytoplasm contains a large store of macromolecules, including the entire protein-synthesizing system (messenger RNA and essential enzymes), DNA and RNA polymerases, and nonhistone nuclear proteins (tubulin and others). The macromolecules are used only after the egg is activated and during the early stages of embryonic development.

Eggs in plants are discussed in EGO CELL.

What does it mean when you dream about an egg?

Eggs are universal symbols of wholeness, fertility, new birth, and rebirth (or resurrection; hence, their association with Easter). Broken eggs may present a state of brokenness in one’s life or “breaking out of a shell.”

1. the oval or round reproductive body laid by the females of birds, reptiles, fishes, insects, and some other animals, consisting of a developing embryo, its food store, and sometimes jelly or albumen, all surrounded by an outer shell or membrane
2. any female gamete; ovum
Collins Discovery Encyclopedia, 1st edition © HarperCollins Publishers 2005

(dreams)
Eggs are symbolic of something new and fragile. They represent life and development in its earliest forms and, as such, the possibilities are limitless. At times, eggs can represent captivity or entrapment. Carl Jung said that eggs represent our captive souls. Therefore, the egg in your dream may very well represent you in the most profound sense. Are you trapped in a shell or did you break out of it and are you now free to soar?
Bedside Dream Dictionary by Silvana Amar Copyright © 2007 by Skyhorse Publishing, Inc.