Also found in: Dictionary, Medical.
Related to Pyrethrins: permethrin, pyrethroids, Piperonyl butoxide
The following article is from The Great Soviet Encyclopedia (1979). It might be outdated or ideologically biased.

mixtures of substituted (+)-pyrethrolone with esters of (+)-trans-chrysanthemumic and pyrethrinic acids. Pyrethrins have insecticidal properties and are found in various chrysanthemums of the genus Pyrethrum. Pyrethrins are optically active, colorless liquids with high boiling points; they consist of geometric isomers that are easily hydrolyzed by base but are stable in weakly acidic mediums. They are easily decomposed by light, moisture, and air. The median lethal dose for rats ranges from 200 to 2,600 mg/kg, administered orally. 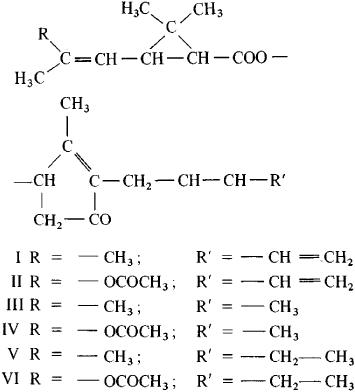 Pyrethrins are usually extracted from the crushed flowers of chrysanthemums of the genus Pyrethrum with a mixture of the polar solvent methanol and the nonpolar solvent kerosine. Sometimes a single solvent is used, for example, methylene chloride, dichloroethane, or some other chlorinated hydrocarbon. Admixtures in pyrethrins are removed either by precipitation, by adsorption onto charcoal, or by freezing with subsequent filtration. The technical-grade, 25-percent extract contains 10 percent pyrethrin I, 9 percent pyrethrin II, 3 percent cinerin I, approximately 3 percent cinerin II, and traces of jasmolines. It is a yellow oil that is insoluble in water but soluble in most organic solvents. The ratio of the components and the toxicity for warmblooded animals may be controlled by selecting the type of source flowers, by controlling the conditions of plant growth, and by resorting to various treatments during the extraction process or during distillation of the solvent.

Pyrethrins are contact insecticides with a rapid paralyzing action, that is, they exert a knockdown effect. They are supplied as aerosols, dusts, or emulsions for use against household insects, including true bugs, lice, and cockroaches. They can also be used to exterminate harmful insects in agriculture and in the treatment of stores and supplies, although their action is of very short duration. Because pyrethrins are unstable, insects rarely develop a tolerance. The insecticidal action of pyrethrins is intensified by adding various synergists, for example, piperonyl butoxide, tropital, and sesamex. For most countries, pyrethrins are expensive, imported insecticides, and thus synthetic pyrethrin analogs, known as pyrethroids, are manufactured instead.

Feedback
Flashcards & Bookmarks ?
Please log in or register to use Flashcards and Bookmarks. You can also log in with
Flashcards ?
My bookmarks ?
+ Add current page to bookmarks
Mentioned in ?
References in periodicals archive ?
The highest mortality of Antestia bug was recorded in plots that were pruned and treated with pyrethrins, such as Pyrethrum 5EW with a mean of 15.8 [+ or -] 1.5 bugs compared to plots sprayed with imidacloprid with a mean of 6.9 [+ or -] 1.6 bugs at 12 h post-treatment.
Options for managing Antestiopsis thunbergii (Hemiptera: Pentatomidae) and the relationship of bug density to the occurrence of potato taste defect in coffee
Although a previous Environmental Protection Agency assessment reported no association between pyrethrin or pyrethroid exposure and asthma (5), a recent study found that among persons with acute pesticide-related illness, those with pyrethrin or pyrethroid exposures were significantly more likely to have asthmatic symptoms than were those with other pesticide exposures (6).
Acute Illnesses and Injuries Related to Total Release Foggers--10 States, 2007-2015
Public Health Statement for Pyrethrins and Pyrethroids.
Zika in the United States: how are we preparing?
Pyrethroids are synthetic chemical insecticides that act like pyrethrins. Both compounds are lethal to bed bugs and can flush bed bugs out of their hiding places and kill them.
Lethal chemicals tackle pests
Pyrethroids are man-made chemicals similar in structure to the pyrethrins but with more useful attributes, including increased toxicity to insects and environmental stability.
Inspiration and insecticide from the flower garden
In our study, we evaluated four pesticides, chlorpyrifos, methomyl, pyrethrins, and spinosad on the fourth instar larvae after 24-h exposure under laboratory conditions.
Potential evaluation of certain conventional pesticides on fourth instar larvae of Cotton Leafworm, Spodoptera Littoralis (Boisd.) (Lepidoptera: Noctuidae) under laboratory conditions
The insecticide belongs to the pyrethroid family, a synthetic version of pyrethrins, which are natural insecticides derived from chrysanthemum flowers.
Bug patrol
contain pyrethrins and pyrethrum (pyrethroids used in agri-business are an amped-up, synthetic version of these).
Autism and pesticides
Natural pyrethrins are compounds extracted from flower heads of pyrethrum and are esters of chrysanthemic acid and pyrethric acid.
Chemotherapeutics for control and treatment of ectoparasites in companion animals
Increasing reports of lice resistant to the traditional first-line therapies of permethrin and pyrethrins have driven interest in alternative therapies.
Topical ivermectin won't move to front of the class for head lice
Pyrethroid insecticides and naturally occurring pyrethrins are commonly used for insect control in households and in agriculture.
Increasing use of pyrethroids in Canadian households: should we be concerned?
Many wild bed bugs have also developed resistance to pyrethrins, the primary active ingredient in bug bombs.
Bed Bug Bombs Are Duds, Yet Still On Shelves