solid body that exhibits such crystalline features as symmetry and repeating patterns of unit cells (regular arrangements of atoms, molecules, or ions) but—unlike a crystalcrystal,
a solid body bounded by natural plane faces that are the external expression of a regular internal arrangement of constituent atoms, molecules, or ions. The formation of a crystal by a substance passing from a gas or liquid to a solid state, or going out of solution (by
..... Click the link for more information. —requires more than one type of unit cell to achieve large-scale order, i.e., the structure cannot consist of the repetition of a single cell. Quasicrystals exhibit symmetries (e.g., icosahedral and decagonal) not seen in crystals. Quasicrystals seem to forge a link between conventional crystals and materials called metallic glasses, which are solids formed when molten metals are cooled so rapidly that their constituent atoms do not have adequate time to form a crystal lattice. The first quasicrystal was discovered in a rapidly cooled sample of an aluminum-manganese alloy by a team led by Daniel S. ShechtmanShechtman, Daniel S.,
1941–, Israeli materials scientist, Ph.D. Technion (Israel Institute of Technology), 1972. Shechtman, who joined the faculty at Technion in 1975, received the Nobel Prize in Chemistry in 2011 for discovering quasicrystals, a mosaiclike chemical
..... Click the link for more information.  at the National Bureau of Standards (now the National Institute of Standards and Technology) in Gaithersburg, Md., in 1982.

Three models have been advanced to explain the structure of quasicrystals. The Penrose model, derived from the work of British mathematician Roger Penrose by Dov Levine and Paul J. Steinhardt at the Univ. of Pennsylvania, suggests that quasicrystals are composed of two or more unit cells that fit together according to specific rules. The glass model, as refined by American physicists Peter W. Stephens and Alan J. Goldman, suggests that clusters of atoms join in a somewhat random way determined by local interactions. The random-tiling model, which combines some of the best features of the other two models, suggests that the strict matching rules of the Penrose model need not be obeyed so long as local interactions leave no gaps in the structure.

Quasicrystals have been found to be common structures in alloys of aluminum with such metals as cobalt, iron, and nickel. They have also been found in nature (first reported in 2009), in minerals containing aluminum, iron, and copper or nickel, which were found in Chukotka, Russia; the minerals, which have been found in very small quantities, are of meteoritic origin.

Unlike their constituent elements, quasicrystals are poor conductors of electricity. Quasicrystals have stronger magnetic properties and exhibit greater elasticity at higher temperatures than crystals. Because they are extremely hard and resist deformation, quasicrystals form high-strength surface coatings, which has led to their commercial use as a surface treatment for aluminum skillets.

A solid with conventional crystalline properties but exhibiting a point-group symmetry inconsistent with translational periodicity. Like crystals, quasicrystals display discrete diffraction patterns, crystallize into polyhedral forms, and have long-range orientational order, all of which indicate that their structure is not random. But the unusual symmetry and the finding that the discrete diffraction pattern does not fall on a reciprocal periodic lattice suggest a solid that is quasiperiodic. Their discovery in 1982 contradicted a long-held belief that all crystals would be periodic arrangements of atoms or molecules.

It is easily shown that in two and three dimensions the possible rotations that superimpose an infinitely repeating periodic structure on itself are limited to angles that are 360°/n, where n can be only 1, 2, 3, 4, or 6. Various combinations of these rotations lead to only 32 point groups in three dimensions, and 230 space groups which are combinations of the 14 Bravais lattices that describe the periodic translations with the allowed rotations. Until the 1980s, all known crystals could be classified according to this limited set of symmetries allowed by periodicity. Periodic structures diffract only at discrete angles (Bragg's law) that can be described by a reciprocal lattice, in which the diffraction intensities fall on lattice points that, like all lattices, are by definition periodic, and which has a symmetry closely related to that of the structure. See Crystal, Crystallography, X-ray crystallography, X-ray diffraction

Icosahedral quasicrystals were discovered in 1982 during a study of rapid solidification of molten alloys of aluminum with one or more transition elements, such as manganese, iron, and chromium. Since then, many different alloys of two or more metallic elements have led to quasicrystals with a variety of symmetries and structures. The illustration shows the external polyhedral form of an icosahedral aluminum-copper-iron alloy. 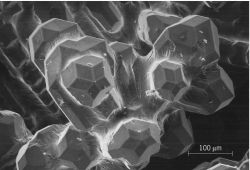 Quasicrystals of an alloy of aluminum, copper, and iron, displaying an external form consistent with their icosahedral symmetry

Feedback
Flashcards & Bookmarks ?
Please log in or register to use Flashcards and Bookmarks. You can also log in with
Flashcards ?
My bookmarks ?
+ Add current page to bookmarks
Mentioned in ?
References in periodicals archive ?
The quasicrystals have many attractive properties, such as high hardness, low electrical and thermal conductivities, low surface energy, accompanied by low coefficient of friction, high resistance to oxidation and corrosion, and unusual optical properties that were not observed for crystalline alloys [2].
Characterization in the Icosahedral Phase of [Al.sub.63][Cu.sub.25][Fe.sub.12] System
The constitutive equations describing the interrelationships between the components [u.sub.X], [[epsilon].sub.XY], [[sigma].sub.XY], [w.sub.X], [w.sub.zX], [H.sub.zX], [D.sub.X], and [E.sub.X], respectively, of the phonon displacement vector, phonon strain tensor, phonon stress tensor, phason displacement vector, phason strain tensor, phason stress tensor, electric displacement vector, and electric field vector, for X and Y = x, y, or z, for deformations of the piezoelectric quasicrystal can be elegantly written in the matrix notation as follows:
Nonuniformly Loaded Stack of Antiplane Shear Cracks in One-Dimensional Piezoelectric Quasicrystals
The optical lattices, such as periodic and quasicrystal lattices, are not necessary for stability of the solitons in the self-focusing cubic media [14].
Pseudospectral renormalization method for solitons in quasicrystal lattice with the cubic-quintic nonlinearity
Pohl, "Glasslike lattice vibrations in the quasicrystal A[l.sub.72] j P[d.sub.20.7] M[n.sub.7.2]" Physical Review B, vol.
The anisotropic glassy properties of decagonal quasicrystals
(70.) Symko, O.G., Park, W and Kieda, D (2001): Quasicrystal thin films for Biomedical Applications Surface Modification Technologies on CD (ASM International)
Monitoring, control and prevention practices of biomaterials corrosion--an overview
To date, quite a few alloys containing a quasicrystal phase have been identified.
An investigation of the effect of processing conditions on the microstructure of vacuum plasma-sprayed Ti-Zr-Ni quasicrystal coatings
(1985) Crystal and quasicrystal structures in Al-Mn-Si alloys.
Investigation of phase transformations in powders of multi-component alcufe-base alloy with quasi-crystalline structure
For Ca-montmorillonite the lamellae are held within a potential well even in distilled water and the quasicrystals are therefore stable; however, dispersion of these entities takes place at about 2 mmol(+)/L, which is obviously much greater than required to initiate swelling between the lamellae composing a quasicrystal, since these are retained in the potential well even in distilled water.
The significance of the threshold and turbidity concentrations in relation to sodicity and microstructure
in 1984 [1], a lot of studies have been carried out on the structure and properties of the quasicrystal phase.
Effect of Ca Concentration on Microstructure and Mechanical Properties of As-Cast and As-Extruded Quasicrystal-Strengthened Mg-7.2Zn-2.4Gd Alloy
Another difference is that the quasicrystal in this system is decagonal instead of icosahedral.
[Al.sub.62][Cu.sub.25][Fe.sub.12] and Quasicrystalline Phases and Their Influence on Oxidation
Wang, "Electrically tunable graphene plasmonic quasicrystal metasurfaces for transformation optics," Scientific Reports, Vol.
Graphene-Based Infrared Lens with Tunable Focal Length