[′rā‚där ‚shad·ō]
(electromagnetism)
A region shielded from radar illumination by an intervening reflecting or absorbing medium such as a hill.
McGraw-Hill Dictionary of Scientific & Technical Terms, 6E, Copyright © 2003 by The McGraw-Hill Companies, Inc. 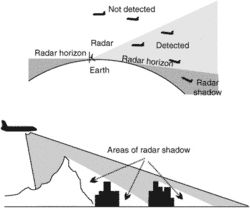 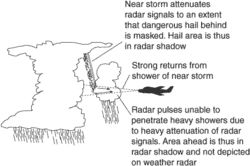 This towering cumulonimbus (CB) cloud is in radar shadow and is not fully revealed on weather radar.
i. The area where a radar is prevented from detecting objects or targets, as the radar waves are unable to reach them either because of obstructions en route or curvature of the earth (radar horizon).
ii. A phenomenon in the weather radar when radar energy is unable to penetrate the storm and is attenuated to an extent that there is no return from the storm. A radar shadow can result from an attenuated signal from a nearby storm, masking a larger and more dangerous storm behind. Thin lines of red are often seen connecting two large strong returns and bowing out on the backside. This indicates that a massively powerful thunderstorm may lurk in the black and apparently benign area behind the thin line of red. Radar energy is being attenuated (weakened) so badly that it cannot get back to the receiver to advise the pilot of the real danger. The black area behind the red, showing no return, is called a radar shadow.
An Illustrated Dictionary of Aviation Copyright © 2005 by The McGraw-Hill Companies, Inc. All rights reserved

Feedback
Flashcards & Bookmarks ?
Please log in or register to use Flashcards and Bookmarks. You can also log in with
Flashcards ?
My bookmarks ?
+ Add current page to bookmarks
Mentioned in ?
References in periodicals archive ?
This is called attenuation, or better known as a radar shadow, and it's bad news.
The quiz
Thomas Hill, for the airport, told Government Inspector David Rose that the turbines could "mimic and obscure" aircraft and cast a radar shadow. Barrister David Hardy, representing RWE, said Government green energy targets would double by 2020 and there was a substantial shortfall in Northumberland that had to be met.
Claim wind farm plan will destroy landscape; Inquiry is told of 'overwhelming' impact of turbines
He also thought the large building could cause a problem "radar shadow" for the airport.
Brum bid 'does not stand a chance' ENVIRONMENTAL CAMPAIGNERS JOIN COVENTRY IN CLAIMING THAT BIRMINGHAM WOULD BE WORST OF ALL FOR 'NEW WEMBLEY'
One of the things I enjoy about doing instrument instruction in the radar shadow of mountains is that students have to fly the occasional procedure turn.
No U-turns allowed: in a world of vectors, procedure turns are like your spare tire: rarely bothered with but always there in case you need them. Except, they aren't always there
It also includes additional software tools, such as radar shadow mapping, video query and multi-mode enhanced target tracking.
Ground Surveillance Aircraft
Gray hatching denotes areas with complete beam blockage (radar shadows) due to higher terrain.
RadarNet-Sur first weather radar network in tropical high mountains: a cost-effective X-band weather radar network was installed in the high Andes of southern Ecuador to complement an existing sparse rain gauge network in areas frequently affected by El Nino-Southern Oscillation (ENSO) precipitation hazards
The problem of radar shadows in mountainous terrain led to a relatively high-flying twin-jet transport.
Looking down from great height