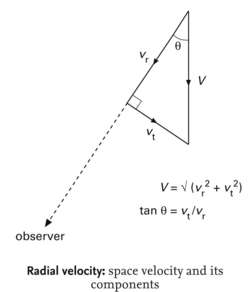 (ray -dee-ăl) (line-of-sight velocity) Symbol: v r. The velocity of a star along the line of sight of an observer. It is calculated directly from the doppler shift (see Doppler effect) in the lines of the star's spectrum: if the star is receding there will be a redshift in its spectral lines and the radial velocity will be positive; an approaching star will produce a blueshift and the velocity will be negative. Most stars have values lying between +40 and –40 km s–1. Radial velocity is usually given in terms of the Sun's position so that the Earth's orbital motion has no effect.

A star's velocity in space relative to the Sun – its space velocity – is a vector quantity and can be split into two components: its radial velocity and its tangential velocity, v t, along the direction of proper motion. Measurements of these components give both the magnitude, V , and direction, θ, of the star's space velocity (see illustration).

(in astronomy), line-of-sight velocity, the projection of the velocity of a star or other celestial object on the direction from the object to the observer, that is, along the line of sight. The Doppler effect, whose applicability to light waves was demonstrated in 1900 by A. A. Belopol’skii, is used in determining the radial velocity. According to this effect, the wavelength of light emitted or absorbed by a moving body increases or decreases depending on whether the body is receding from or approaching the observer. If the wavelength emitted by a source of light that is stationary relative to the observer is λo and that emitted by a moving source is λ, then the difference λ — λ0 depends on the velocity v of the source relative to the observer according to the following formula, which takes relativistic effects into account:

where c is the velocity of light. When v is much less than c, this equation can be written in the approximate form

The radial velocity is determined by measuring the difference between the wavelengths of emission or absorption lines in the spectrum of the celestial object and the wavelengths in the spectrum of a stationary laboratory source of light. The line shifts are small for ordinary stellar velocities. Thus the difference λ — λ0 for λ0 = 4,500 Å amounts to 0.15 Å for a radial velocity of 10 km/sec. The difference in the position of the lines on the spectrogram amounts to only about 0.004 mm if the dispersion of the spectrograph used is 40 Å/mm. Therefore, in order to measure accurately the radial velocity it is necessary to have a specially constructed apparatus that minimizes instrumental and other errors.

Radial velocities of stars have been determined for many years at a number of observatories equipped with large telescopes, including those in the USSR (at the Crimean Astrophysical Observatory of the Academy of Sciences of the USSR). Measurements of the radial velocities of stars in galaxies have made it possible to detect the rotation of galaxies and to determine the kinematic characteristics of the rotation of galaxies, including our own. Periodic variations in the radial velocity of some stars led to the detection of the orbital motion of these stars in binary and multiple systems and, when the angular dimensions of the orbit are known, also led to the determination of the linear dimensions of the orbit and the distance to the star. Periodic variations in the radial velocity are sometimes explained by the pulsation of the outer layers of the star. In a number of cases, a difference in the radial velocities determined from spectral lines originating in different atmospheric layers of the star makes it possible to study the motion of stellar matter. A common radial velocity for a group of stars permits us to identify the group as a cluster of genetically related stars, which is of great importance for studying stellar evolution.

[′rād·ē·əl və′läs·əd·ē]
(mechanics)
The component of the velocity of a body that is parallel to a line from an observer or reference point to the body; the radial velocities of stars are valuable in determining the structure and dynamics of the Galaxy. Also known as line-of-sight velocity.
McGraw-Hill Dictionary of Scientific & Technical Terms, 6E, Copyright © 2003 by The McGraw-Hill Companies, Inc.

Feedback
Flashcards & Bookmarks ?
Please log in or register to use Flashcards and Bookmarks. You can also log in with
Flashcards ?
My bookmarks ?
+ Add current page to bookmarks
Mentioned in ?
References in periodicals archive ?
And here's where multiple detection methods are helpful, because if transit photometry can measure a planet's size, and radial velocity measurements give us the planet's mass, then the density of the exoplanet can be calculated.
The Uncertainty of Detecting Planets
There was no significant difference between the two groups regarding longitudinal S (p=0.07), longitudinal SR (p=0.45), TLD (p=0.86), and time-to-peak radial velocity (p=0.35).
Impaired cardiac and vascular motion in patients with Takayasu's arteritis: A velocity vector imaging-based study
For a large sample of events the total radial velocity <[V.sub.T]([[phi].sub.m])> of all particles falling within the mth azimuthal bin is defined as
Radial Flow in a Multiphase Transport Model at FAIR Energies
Uniform and Symmetric Distribution of the Boundary Radial Velocity. One special case of the uniform distribution of boundary condition is the symmetric case, in which the length of the evaporator and that of the condenser are equal and the magnitude of radial velocity [U.sub.1] and that of radial velocity [U.sub.2] are equal too, as shown below:
Preliminary Estimate of Coriolis Force of Vapor Flow in Rotating Heat Pipes Based on Analytical Solution
The vertical radial velocity [V.sub.r] includes the vertical air motion plus the reflectivity-weighted terminal velocity of the ensemble of particles within the pulse volume.
Finescale structure of a snowstorm over the Northeastern United States: a first look at high-resolution HIAPER Cloud Radar observations
Caption: Figure 5: Radial velocity estimated from simulated I and Q radar data sampled at ((a), (d), (g)) unique PRT of 1050 [mu]s, ((b), (e), (h)) 2-PRT (1050 and 1200 [mu]s), and ((c), (f), (i)) 4-PRT (1050,1200,1500, and 1950 [mu]s) with SNR = 40 dB and different CSR scenarios: (a)-(c) CSR = 10 dB, (d)-(f) CSR = 20 dB, and (g)-(i) CSR = 30 dB.
An Improved Clutter Suppression Method for Weather Radars Using Multiple Pulse Repetition Time Technique
The positions of the pair of vortices (A) explain the reason why the radial velocity changes directions at the vicinity of 150 degrees.
Numerical Studies of Propeller Exciting Bearing Forces under Nonuniform Ship's Nominal Wake and the Influence of Cross Flows
Figure 8 represents the velocity magnitude, tangential velocity, axial velocity, and radial velocity of L21~L25 change with the radial direction at different axial position, and the curves are symmetrical about the axis of the stirring rod.
Experimental and Simulation Research on the Influence of Stirring Parameters on the Distribution of Particles in Cast SiCp/A356 Composites
where [u.sub.s] and [v.sub.s] are the axial and the radial velocity of the particulate phase, respectively; v and [v.sub.t] are the coefficient of the laminar and of the turbulent viscosity, respectively; [tau] is the characteristic time of the particles and it is connected with the drag force produced by the particulate phase:
Assemblage of turbulent jet flows through static particulate media/Turbulentsete jugavooluste kogumi liikumine labi osakestega taidetud staatilise keskkonna
The curves in Figure 5 describe the nature of radial velocity for three different Reynolds numbers.
Numerical simulation of nonlinear pulsatile Newtonian blood flow through a multiple stenosed artery
With the newest telescope instruments, measurements of radial velocity have become so precise that astronomers need to agree on rigorous tests to separate the signal from the noise.
Habitable planets' reality questioned: star's magnetic activity could have led to false detections
Figure 3 illustrates the interpretation of WSR-88D radial velocity data.
Reconstructing velocities of migrating birds from weather radar--a case study in computational sustainability