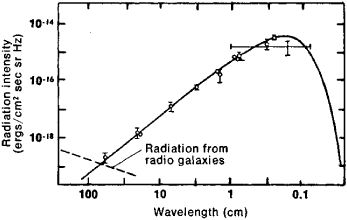 Figure 1. Spectrum of radio background radiation. The solid curved line represents the radiation spectrum of the blackbody with a temperature of 2.7°K.

The discovery of the background radiation confirmed a hypothesis proposed by G. A. Gamow in 1946 (the so-called “big bang” model of the universe), according to which the universe was characterized in the early stages of its expansion not only by a high density but also by a sufficiently high temperature to permit the nuclear fusion that results in the production of light elements. At these high temperatures, the plasma was in thermodynamic equilibrium with the radiation. In the course of the universe’s subsequent expansion, the temperature of the matter and of the radiation diminished adiabatically, protons and electrons recombined, and the equilibrium between the matter and the radiation was destroyed. However, the thermal radiation was preserved up to the present time and can be detected as the radio background radiation.

The background radiation has a substantial effect on a number of processes occurring also at the present time in the universe. Thus, the radiation determines the lifetime of relativistic electrons and superhigh-energy cosmic rays in intergalactic space; electrons, in scattering photons of background radiation, impart energy to them and are themselves braked. The energy of the photons is thus increased many times. This mechanism is possibly the cause of background X-radiation. When the photons of background radiation collide with ultrahigh-energy protons, pi-mesons are generated, and the protons quickly lose energy. Under certain conditions, the collision of these photons with cosmic-ray nuclei can lead to the splitting of the nuclei. The background radiation affects the population of the low energy states of molecules of interstellar matter. This is the basis, in particular, for an indirect method of determining the temperature of the radiation. The temperatures obtained using this method agree closely with those obtained from direct radio observations.