an observing instrument used in radio astronomy and consisting of two antennas separated by a distance D (the base line) and connected by cables, wave guides, or repeater chains. The signals received by the antennas from a radio source are fed through communication lines to the input of a common receiving device (see Figure 1), where they 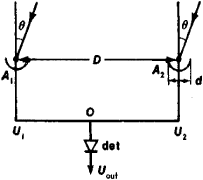 Figure 1. (A1)and (A2) radio-interferometer antennas, (D) base line, (O) point where received signals are combined U1 + U2, (θ)angle of arrival of the wave, (det) receiving device with square-law detector, (Uout) voltage at the radio-interferometer output, (d)antenna diameter

are analyzed and indicated. Depending on the angle between the direction of the source and the normal to the base line, there is a change in the phase difference of the signals arriving at the point where the signals are combined and a change in the power U of the received signal; as a result, space is divided into alternating zones of signal presence and absence. Thus, a directional diagram of a radio interferometer shows multiple fringes. The angular period of the lobes is equal to θ0 = λ/D, the envelope is determined by the diameter d of the antennas, and the width of the envelope is approximately equal to λ/d (Figure 2). Because of the multifringed structure of the directional diagram, radio interferometers are chiefly used for calculating the angular dimensions Δθ of sources from the ratio of minimum to maximum of interference fringes

or for determining the coordinates of the source from the phase of the fringes; ǀΓǀ = 1 for a point source (Δθ ≪ θ0), and ǀΓǀ < 1 and depends on Δθ in the case of an extended source. If the continuous method of spatial frequency spectra are studied, as is often done in radio astronomy in order to study the radio brightness distribution of radio sources, then a two-element interferometer appears to measure the amplitude Γ of a single spatial frequency fsp = D/λ in the source’s spatial frequency spectrum; the interferometer thus is similar to a narrow-band filter (λ is the emission wavelength). By means of successive measurements at various values of D, it is possible to obtain the entire spatial spectrum of the source up to the frequency Dmax/λ and to determine the radio brightness distribution of the radio source. Such radio interferometers with variable base lines are widely used in radio astronomy for the synthesis of source images in aperture synthesis antennas (see).

Figure 2. Voltage at the output of a radio interferometer during observation of an extended source (ǀΓǀ < 1): θ0 = λ/D is the angular separation of the fringes, and θ1 is the phase of the fringe pattern. The directivity pattern of the individual antennas is indicated by the broken line.

The link between the antennas of a radio interferometer does not necessarily have to be a direct one; the received signals may be independently, but simultaneously, recorded at two or more antennas, for example, by means of tape recorders. The recorded signals are later fetched to one place and jointly processed by a computer. This technique permits the antennas of the radio interferometer to be separated by great, even intercontinental, distances. In measuring the dimensions and coordinates of radio sources, a resolving power of 10–4 seconds of arc can be attained in this manner; this significantly exceeds the capability of other methods. As a result, radio interferometers with extremely long base lines are finding ever wider application in astronomy and in the solution of many applied problems in geodesy and geophysics.

Feedback
Flashcards & Bookmarks ?
Please log in or register to use Flashcards and Bookmarks. You can also log in with
Flashcards ?
My bookmarks ?
+ Add current page to bookmarks
TheFreeDictionary presents:
Write what you mean clearly and correctly.
Mentioned in ?
References in periodicals archive ?
Even before the VLA was built, ambitious astronomers envisioned radio interferometers that would gather signals simultaneously with telescopes thousands of kilometers apart.
Radio Astronomy's Resolution Machine: The Very Long Baseline Array --How radio astronomers can hit the "zoom" button and scrutinize unusual objects with unprecedented clarity
In the first presentation Dr David Morgan considered the use of radio interferometers for observing M87 in Virgo.
Meeting of the Radio Astronomy Group, 2012 October 27: held at the National Space Centre, Leicester
Kawase (aerospace engineering, National Defense Academy) explains how radio interferometers can be used to track and monitor the orbits of geostationary satellites in the increasingly overcrowded environment of space.
Radio interferometry and satellite tracking
Radio Interferometry and Satellite Tracking provides a fine resource addressing the critical issue of space communications and satellites that are proliferating so much that they are causing overcrowded orbits - and it provides a fine understanding of radio interferometers for tracking and monitoring satellites in overcrowded conditions.
The Science Shelf
A group led by Daniel Evans (Harvard-Smithsonian Center for Astrophysics) studied the system using the Chandra X-ray Observatory, the Very Large Array and MERLIN radio interferometers, the infrared Spitzer Space Telescope, and the Hubble Space Telescope.
Black hole blasts neighbor