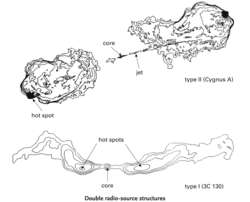 The spatial distribution of the radio emission from a radio source. It may be partly inferred from a radio map of the source, which is the convolution of the true source distribution projected onto a plane and the antenna pattern of the radio telescope, and which is often plotted in contours of constant brightness temperature or flux density; such a map is called a contour map. Other features may be more easily seen in a false-color map or a gray-scale map, in which flux density or brightness are plotted in different colors or shades of gray. Where the angular size of the source is smaller than the antenna pattern, the radio map reveals no details of its structure; the source is then said to be unresolved and is described as a point source. In the converse case, the source is said to be extended.

Maps of extragalactic radio sources often show two distinct bright features called lobes to each side of the optical galaxy position, and usually separated from it by many hundreds of kiloparsecs. These may be joined back to any compact core emission associated with the galaxy nucleus by a faint bridge of diffuse emission, or in the case of quasars by a clearly collimated jet. The lobes are sometimes broken into distinct hot spots of bright emission with wide trailing extensions. These double radio sources are commonly separated into two Fanaroff–Riley (FR) types, according to both their morphology and power (see illustration). Type I systems are lower-luminosity radio galaxies with symmetric two-sided bridges extending into smooth lobes. Type II sources have powers above 5 × 1025 W Hz–1 at 178 MHz and are associated with quasars as well as radio galaxies. Type FR II have prominent lobes, with bright outer hotspots and usually display only a one-sided jet or bridge; Cygnus A is a fine example.

If a radio galaxy is moving rapidly through a cluster, its extended lobes and connecting trails are swept back by the ram pressure of the intracluster medium and form a bent double radio source. If the bending is very great, the extended radio structures may combine into a single trail, forming a head-tail source.