A rubble masonry consisting of stones of irregular size and shape with roughly flat faces, set randomly in a wall. 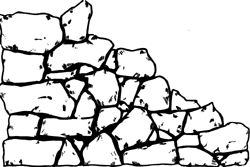 Feedback
Flashcards & Bookmarks ?
Please log in or register to use Flashcards and Bookmarks. You can also log in with
Flashcards ?
My bookmarks ?
+ Add current page to bookmarks
Mentioned in ?
References in periodicals archive ?
If it is random rubble the best solution is to build a frame using 2x3 timber CLS.
Time to dump that old boiler; New model will save you money in the long run
The ground floor is a unifying geological strata, with dark limestone paving bearing the imprints of thousands of fossils, and the main street frontage is clad in undressed grey limestone laid in a random rubble pattern.
Urban rationale: these new municipal offices for a small Irish town meld old and new elements into a highly civilized yet clearly modern urban presence
In a property feature article in Homes & Gardens magazine back in 1955, attention was drawn to the random rubble walling of Kentish rag design in the ground-floor rooms as being a main feature, while Gothic arches lent 'a distinctive character to a house that is full of individuality and charm'.
Residential Property: Hammering home local history; Helen Macklin falls for the charms of an old nailer's cottage, with half a century of history and a wealth of exposed beams
In front, a terrace, honed out of smooth marble to contrast with rough medieval random rubble, provides a promenade and, as it were, an ante-room to mesh-defined spaces.
Medieval Phoenix: a series of modern interventions in the ruins of a German medieval castle give it a new lease of life
Stephen Tudball is job architect for the two-storey, steel framed structure with its five dental surgeries and three physio consulting rooms clad in 150mm thick random rubble walling.
Who's building what
The Victorian stables were gutted down to their random rubble walls, an intermediate floor was inserted and the roof was reslated at the original pitch.
Pooled resources: A moving and powerful space has been created within the outbuildings of an Irish country house
Above the fabled and astonishingly precise Inca masonry of the base levels, upper parts were probably made of random rubble skimmed with render.
Outrage
A differentiation of the structure from heavy below (reinforced concrete floors, random rubble walls and fireplaces) to lightweight above (steel superstructure) helps to root the house securely into its site.
AUSTRALIAN CLIFFHANGER
Entrance elevations are of white render relieved by random rubble, which forms a notional plinth.
TROPICAL INTENSITY