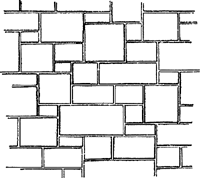 random work
1. Random stonework.
2. Masonry of rectangular stone not laid in regular courses, but broken up by the use of stones of different heights and widths, fitted closely.

Feedback
Flashcards & Bookmarks ?
Please log in or register to use Flashcards and Bookmarks. You can also log in with
Flashcards ?
My bookmarks ?
+ Add current page to bookmarks
TheFreeDictionary presents:
Write what you mean clearly and correctly.
Mentioned in ?
References in periodicals archive ?
The wall would light up with people's text messages of peace and hope, scrolling in various colours, creating a random work of art.
Nostalgia: THE ACORN GALLERY
Jay Buggs formalizes the coincidental and emphasizes the conscious process of composition that is behind the seemingly random works. The thought processes, which are supposedly private, highly subjective and unfiltered in references to dream worlds, are frequently revealed as assemblages.
ASCAP Music Publisher Yvonne Wilcox Presents Hip-Hop Lyricist Jay Buggs
I loaded these pieces first into my downdraft salt kiln, followed by random works that had lingered around the studio.
The three-year cooling cycle: Hadrian Mendoza demonstrates his patience when opening a kiln
Such random works include the five golden bulls by artist Valay Shinde, which takes up most of the space of the Mumbai-based Sakshi Art Gallery, as well as a painting by artist Prajakta Palav that shows the Hindu deity Ganesh in a local train brought by the London-based Grosvenor Vadhera Gallery.
Art Dubai highlights South Asia galleries
I own at least a dozen TL Lange paintings; two Tom Wesselmann screen prints; some original prints by Thomas Hart Benton and Lautrec; a steel sculpture by Texas artist Joe Barrington; random works by Donald Sultan, Malcolm Liepke and Douglas Morris; and, of course, some paintings by longtime GI artist Max Hayslette and Maeve Harris.
Q&A: with Larry Winn
Users of Carousel are presented with a gallery of nine random works of art.
BT search technology launched at Tate Online