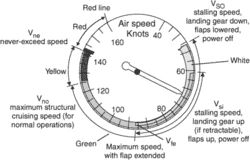 The colored marks on aircraft instruments that indicate the ranges of operation of that system as specified in manufacturers' manuals. The ranges and colors most often used are
i. A red radial line, which means, “Do not exceed the parameter beyond this.”
ii. A green arc, indicating the normal operating range.
iii. A yellow arc, which indicates the caution zone.
iv. A blue radial line, which is used only in an ASI (air-speed indicator), shows the best single-engine-rate-of-climb speed.
v. A white arc, which also is used only in an ASI, shows the flap-operating speed.
An Illustrated Dictionary of Aviation Copyright © 2005 by The McGraw-Hill Companies, Inc. All rights reserved

Feedback
Flashcards & Bookmarks ?
Please log in or register to use Flashcards and Bookmarks. You can also log in with
Flashcards ?
My bookmarks ?
+ Add current page to bookmarks
Mentioned in ?
References in periodicals archive ?
Last year, the JF-17 Thunder aircraft shot down a slow speed target with BVR (Beyond Visual Range) and IR (Infrared) missile with pin-point accuracy at Sonmiani firing range marking a landmark occasion for the force as well as the whole nation.
Pakistan successfully test-fires long-range 'smart missile' from JF-17 Thunder
Photos shot from this hill framed the old city and the port, with the Lebanon range marking the horizon line.
Western lens on the Middle East
WELSH whisky producer Penderyn has launched a new range marking key events and figures in Welsh history.
Raise a glass to the icons of history
The collection includes Pearl Lowe's Autumn 2011 range marking her seventh collaboration with Peacocks, as well as the catwalk inspired Peacocks by Design collection.
Be a fashion VIP for a day
The one-piece design incorporates Pre-Gaged[R] range marking on the outside of the cuff and a sizing guide to indicate when a larger or smaller cuff is required.
PRODUCT SHOWCASE Protective Apparel
The rear sight originally had range markings stamped on the side and the converted rifles partially removed these markings.
Siamese Mauser Conversion
Its primary range markings are also in 25yard increments but only out to 150 yards.
Above average: the new B series rimfires from savage deliver functionality and accuracy at a great price
The easiest way to identify these rare historic oddities is via the range markings on the left side of the rear sight base.
The first squeeze-bore: military necessity trumps safety, and captured Russian rifles were modified by the Austro-Hungarians in ways arms designers never imagined!
The range markings on the normalized AoA indicator are universal and designed for simple and intuitive interpretation.
Safe Flight AoA: lift, speed control: the inventors of the stall warning bring critical low-speed awareness to a higher level with a new angle of attack system. FAA sign-off is tricky
* Using a suitable tool, make the old range markings on the front side of the dipstick unreadable.
Oil over-filling fix
The one-piece design incorporates Pre-Gaged[R] range markings on the cuff and a sizing guide to indicate when a larger or smaller cuff is required.
Reusable one-piece cuffs. (Blood Pressure Cuffs)
Replacement airspeed indicators must have the correct silk-screened range markings on the face of the indicator, so the shop sends the page from the aircraft flight manual off to get the right replacement.
Ailing instruments: replace them if you can: repairing steam-gauge instruments looks like a bargain but can cost you more in the long haul. Not all shops and overhauls are created equal