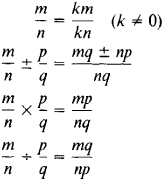 Feedback
Flashcards & Bookmarks ?
Please log in or register to use Flashcards and Bookmarks. You can also log in with
Flashcards ?
My bookmarks ?
+ Add current page to bookmarks
Mentioned in ?
References in periodicals archive ?
The other text was Making Sense of Fractions, Ratios, and Proportions (NCTM 2002), the 64th yearbook from the National Council of Teachers of Mathematics (NCTM) that focused specifically on recent research related to issues with rational numbers and offered us a wider view of the existing research.
Developing a theoretical framework for examining student understanding of fractional concepts: an historical accounting
St.: Hence [square root of 2] is not a rational number; but I know it to have a decimal expansion ...
Square root of 2 and the idea of convergence: a socratic experience
From fractions to rational numbers of arithmetic: A reorganization hypothesis.
Initial treatment of fractions in Japanese textbooks
Students have difficulty translating one rational number model, whether verbal, pictorial, or symbolic, into another.
The number sense of preservice elementary school teachers
A rational number a/b is represented by a finite continued fraction, that is, a number of the form
Self-similar pitch structures, their duals, and rhythmic analogues
[S.sub.a,n]+ and [S.sub.b,m]+, R[[S.sub.b]+, [S.sub.a]+] is at least as great as any rational number in
Numbers as quantitative relations and the traditional theory of measurement
Whole numbers and fractions together make up the rational numbers (those that can be expressed as ratios), and it is easy to suppose that rational numbers are all that exist.
Irrational numbers
Since integers are closed for addition and multiplication, AD= an integer BC= an integer BD= an integer AD + BC = an integer + an integer = another integer Therefore, (AD + BC)/BD = integer/ integer and by definition, a rational number is the ratio of two integers, so the proof is complete.
Synthesis of equal delay transmission line transformer networks
The Galois group of f (a, x) is isomorphic to [C.sub.4] [??] [C.sub.2] if and only if a [not equal to] [n.sup.2] - 1/2n with a rational number n.
On a Galois group arising from an iterated map
Kyril Dombrowski [17] mentioned that oscillating systems --having the peculiarity to change their own parameters because of interactions inside the systems--have a tendency to reach a stable state where the individual oscillator frequencies are interrelated by specific numbers--namely minima of the rational number density on the number line.
Scale-Invariant Models of Natural Oscillations in Chain Systems and Their Cosmological Significance
But in my experience, many calculators resort to rational number finite-decimal approximations, further truncated by the limited number of significant figures used or displayed by the calculator.
Response
Intermediate teachers' knowledge of rational number concepts.
Detecting and correcting fractions computation error patterns