A localizer with both front beam and back beam. 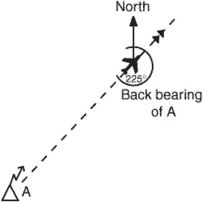 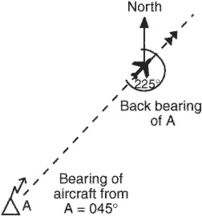 No change in back bearing in this case as the aircraft is flying directly south.
A reciprocal beam on the other side of a transmitter and on a reciprocal heading, as in an ILS (instrument landing system) localizer. Aircraft on a back beam may not have glide-path information.
back bearing
i. The horizontal angle, measured clock-wise from a datum, and observed from an aircraft for a point over which it has passed without an intervening alteration of a heading. It is the reciprocal of track.
ii. A bearing differing by 180°, or measured in the opposite direction from a given bearing. Also called a reciprocal bearing.
iii. The bearing at the opposite end of a line from the observer as measured from the true meridian at the opposite end of the line. The back bearing on all lines (other than north-south lines) differs from the bearing at the observer's station by the amount of convergency of the meridians between the two points.
An Illustrated Dictionary of Aviation Copyright © 2005 by The McGraw-Hill Companies, Inc. All rights reserved