part of the body of a saint or a thing closely connected with the saint in life. In traditional Christian belief they have had great importance, and miracles have often been associated with them. Members of the Orthodox Eastern Church have generally followed St. John of Damascus in teaching that the earthly body of the saint has a kind of permanent grace, but in the Roman Catholic Church the miracles are held to be performed by the intercession of the saint in heaven on the prayer of the living; relics therefore are only to be revered as memorials, and belief is not required in any particular relic as authentic or miraculous. Roman Catholic altars (even portable ones) contain a relic, a rule coming from the time of the persecutions in Rome, when Mass was said over the martyrs' graves. Protestants have abandoned relics. Veneration of relics as miraculous dates from the 3d cent. Famous relics include the pieces of the True Cross (see crosscross,
widely used symbol. In various forms, it can be found in such diverse cultures as those of ancient India, Egypt, and pre-Columbian North America. It also is found in the megalithic monuments of Western Europe.
..... Click the link for more information. ); the veronicaveronica
[Lat., probably connected with Greek Berenice], relic preserved in St. Peter's Church, Rome. It is said to be a veil that a woman used to wipe the face of Jesus as he was on the way to Calvary. The cloth retained the print of his face.
..... Click the link for more information. ; the Holy Nails in the iron crown of Lombardy (Monza, Italy); the Holy Lance (St. Peter's, Rome); the Holy Coat (Trier, Germany); and the Precious Blood of Bruges. These are all called relics of the Passion. Celebrated shrines are often depositories of relics, e.g., of St. Peter and St. Paul at St. Peter's, of St. James at Santiago de Compostela, Spain, of St. Thomas à Becket at Canterbury, of St. Edward the Confessor at Westminster Abbey. Many relics are duplicated, i.e., there are rival claims of genuineness. Since the Middle Ages, close accounting of relics has been maintained in Western Christendom; the creation of false relics or the buying or selling of genuine relics is prohibited under penalty of excommunication.
The Columbia Electronic Encyclopedia™ Copyright © 2013, Columbia University Press. Licensed from Columbia University Press. All rights reserved. www.cc.columbia.edu/cu/cup/ 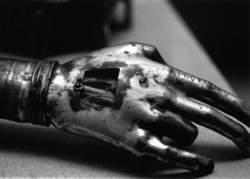 Relics, usually bones or articles of clothing from Jesus or important Roman Catholic saints, are often kept at church altars. Sometimes they may be stored in unique ways, such as these bones preserved inside a metallic hand. Fortean Picture Library.

Among the more controversial issues engaging the Roman Catholic Church in the modern world is its continued use of relics. The critique of some relics in the Middle Ages led to a rejection of their use by Protestants and a complete denunciation of relics by modern skeptics. Officially, a relic is something belonging to or connected with Jesus or one of the saints. Typically, relics are bodies of these holy people, or parts thereof, or pieces of clothing they wore. The church also distinguishes between first-class relics (a body part or an instrument used in their penance or torture) and a second-class relic (an object such as clothing that had been in close contact with them).

The most widespread use of relics was in the altars of local churches. It is a rule not to dedicate the altar of a Catholic church until after the relics of a saint or martyr have been formally entombed therein. The relics may be sealed in the sepulcher, a symbolic tomb.

The church insists that relics are not objects of worship or adoration, but are venerated as signs of God and Christ. The saints now rest in the presence of God and their remains thus become appropriate symbols of the deity whom they served. This distinction in Catholic teachings is often lost in practice. The canonization process includes consideration of miracles (especially healings) that have been associated with the person considered to be designated a saint. Somesaints such as Padre Pio are famous for miracles, and the devotion and expectancy for extraordinary events directed to such saints is often difficult to distinguish from worship.

The most prized relics are those connected directly to Jesus and the events in his life, death, and resurrection. Such relics would include any articles of clothing he wore, pieces of the true cross on which he was crucified, the crown of thorns he wore, the spear used to pierce his side, the cup from which he drank at the Last Supper, and other objects related to the biblical story. Beginning in the fourth century, when the church became a legal entity under Roman Emperor Constantine, one can notice a heightened interest in relics. Much of that interest was generated by Helena (c. 248-c. 329), the mother of Constantine, who converted to Christianity and toward the end of her life traveled to Palestine, explored Jerusalem and Bethlehem, and reportedly found Jesus’ cross and other important relics.

During the era of the crusades, interest in relics grew immensely as returning crusaders brought a variety of items home from Palestine that they claimed were true relics (for example, the blood of Jesus, milk from the Virgin Mary). At the same time, stories of miraculous occurrences around saintly individuals, including the unusual preservation of their bodies, multiplied. Wealthy individuals, prominent church leaders, and powerfulrulers attempted to collect and endow local churches with prominent relics. Many were gathered for inclusion in Saint Peter’s Cathedral through its construction in the sixteenth century. Among the many treasures claimed to be found there are various relics of the Apostle Peter, Veronica‘s Veil, the Spear of Longinus used at the crucifixion, and a piece of the True Cross.

Even as relics were promoted in the Middle Ages, questions as to their authenticity were raised. For relics related to Jesus and other people who appear in the New Testament narrative, there was frequently a significant gap between the apparent ages of these items and the time period from which they supposedly came. In the modern world, historians and scientists have joined forces to study relics and analyze their true age. The critique of the historicity of many prominent relics, such as the Shroud of Turin or the crown of thorns (now housed in Paris, France), has been supplemented by scientific studies of the many extraordinary occurrences associated with them, such as the noncorruptibility of the body of different saints.

The Roman Catholic Church does not commonly attempt to authenticate relics, especially those used in the altars of local churches. It does, however, offer its seeming approbation of some relics by its allowance and/or approval of the veneration of some, or by, for example, its inclusion of prominent relics in equally prominent locations such as Saint Peter’s Cathedral. The Church, too, makes the acceptance or rejection of a particular relic a matter of compulsion, and it allows for the continuing critique of individual relics by the Church’s scholars.

In a broader sense, the term “relics” may be used for items connected to religious objects from other than the Roman Catholic tradition, or even the Christian tradition. For example, the Armenian Orthodox Church claims to possess the spear of Longinus. In the last half of the twentieth century, there have been a variety of claims that relics of Noah‘s Ark have been discovered, and amateur archeologist Ron Wyatt claimed to have discovered a number of items mentioned in the Jewish Bible (Christian Old Testament) such as the Ark of the Covenant and the tablets upon which God inscribed the Ten Commandments. Claims about Noah’s Ark, which became caught up in debates over the authenticity of the Bible, attracted many Protestants, and they have become as controversial as any of the Roman Catholic relics.

(Russian, moshchi), the remains of so-called saints, which are objects of religious worship in the Catholic and Orthodox churches.

The worship of relics was established in the third century. It was repudiated in Byzantium by the Iconoclasts but was restored by the seventh ecumenical council (Nicaea II) in 787. The church attributes miraculous powers to relics. The worship of relics became a form of worship of saints. It was a substantial source of income for the church, especially in the Middle Ages, since contributions were given by worshipers who came to venerate the relics.

in various religions, specially venerated objects that supposedly once belonged to gods, prophets, or saints; also, the remains of saints. Miraculous powers, such as the power to cure illnesses, are attributed to relics.

The veneration of relics goes back to primitive beliefs (fetishism) and became widespread in Christianity during the Middle Ages, when relics were provided by churchmen in great quantities. Every church and monastery strove to amass its own relics in order to attract believers. In Western Europe, the veneration of relics became established with particular intensity from the time of the Crusades. In the 11th through 13th centuries, many “sacred” objects were brought from the East. Even today the church takes advantage of religious credulity and supports the veneration of relics throughout the world.

Metaphorically, the term “relics” is also applied to objects preserved as a memory of the past.