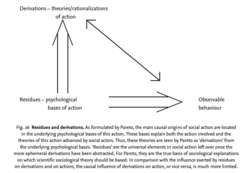 Fig. 26 Residues and derivations. As formulated by Pareto, the main causal origins of social action are located in the underlying psychological bases of this action. These bases explain both the action involved and the theories of this action advanced by social actors. Thus, these theories are seen by Pareto as ‘derivations’from the underlying psychological bases. ‘Residues’are the universal elements in social action left over once the more ephemeral derivations have been abstracted. For Pareto, they are the true basis of sociological explanations on which scientific sociological theory should be based. In comparison w/ith the influence exerted by residues on derivations and on actions, the causal influence of derivations on action, or vice versa, is much more limited.

a distinction drawn by PARETO, as part of his discussion of’nonlogical’ (or irrational) forms of action, in which residues are the uniform psychological bases underlying social action, and derivations the rationalizations or ‘theories’ which are advanced by social participants as justifications of their social actions. As Pareto saw it, many sociological theories are themselves derivations. He regarded his own theories, in replacing these, as establishing sociology on a new scientific footing (see Fig. 26).

Six main categories of residues were identified by Pareto, but only two of these: the instinct for combinations (‘class I residues’) and the persistence of aggregates (‘class II residues’), are critical to an understanding of his approach. These play a central part in his theory of élites (see CIRCULATION OF ÉLITES).

Feedback
Flashcards & Bookmarks ?
Please log in or register to use Flashcards and Bookmarks. You can also log in with
Flashcards ?
My bookmarks ?
+ Add current page to bookmarks
References in periodicals archive ?
Having introduced Pareto's work, in the second chapter his sociological sentiments and reasons theory will be investigated, mainly from three elements: non-logic actions, residues and derivations. By that investigation, it is expected that some elements may clarify the complex relation of reason and emotion in human decision making.
From the analysis of residues and derivations, Pareto wanted to comprehend the paradox of human behavior.
The main goal in his sociological work was to understand how economics, politics and society function in interdependency--how a society maintains certain equilibrium, based on what he calls residues and derivations. Pareto has a cyclical approach to sociology, unlike authors that defend a progressive history, like eschatological philosophers of the "end of times", such as Hegel, Marx and Fukuyama.
REASON AND EMOTION IN HUMAN DECISION-MAKING: A PARETIAN APPROACH/RAZAO E EMOCAO NA TOMADA DE DECISOES HUMANAS: UMA ABORDAGEM PARETIANA
Encyclopedia browser ?
Full browser ?
CITE
Site: Follow: Share:
Open / Close